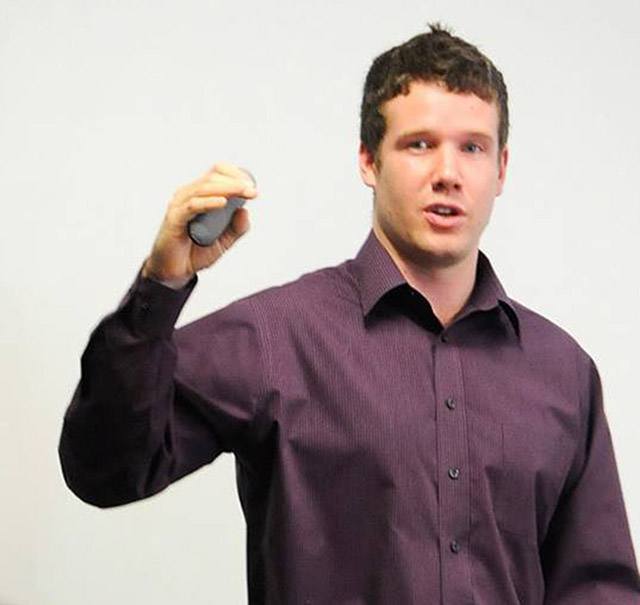 I recommend reading several books a month, getting 5-6 mentors and then also doing it daily.

Born and raised in Cedar Rapids, Alec Whitters grew up thinking he would be a doctor or a dentist, but things changed just before graduation. During his 3rd year in dental school, he stumbling upon a problem preparing for his certification exams, and with a group of friends, founded Higher Learning Technologies (HLT) to solve that problem. HLT is now a Coralville-based startup that builds apps in the education space, earning 250,000+ users in more than 150 countries, with three apps grossing in the Top 100 in the education app store.
The company has received funding from the state of Iowa’s Demonstration Fund, and raised more than $1.3 million dollars of equity investment in Iowa. HLT has won numerous Startup of the Year and Product of the Year Awards, and has received considerable media attention at both the local and national level.

Where did the idea for Higher Learning Technologies come from?

In late 2012 I was 6 years down the dental school path at the University of Iowa. I was studying for one of the most important exams of my life, my dental licensure exams. Everyone in my class was using hundreds of paper flashcards to study, and that made no sense at all to me, because I had a new smartphone that was the same size as a flashcard. Why could I not study from my phone? I called up the publishing companies begging them to create an app to solve this problem but they quickly dismissed it as a dumb idea.

At that moment I decided if no one else would do it then I would have to. I knew it was something students needed. Only problem was I knew nothing about app creation nor did I have enough dental knowledge to write the content. I pressed forwards, mobilizing my friends, classmates and teachers to create the team that eventually became Higher Learning Technologies. It wasn’t easy to figure things out, especially while taking 25 credits that semester in school. Somehow we found a way to make progress and within months realized we were onto something that could really change students lives.

Once I realized how needed this solution was, and that we could do it, I decided to drop out of school to go full time at this opportunity. I was just starting my 7th year of college. My friends, classmates and parents thought it was the dumbest thing I could do. I didn’t have much support initially but held a deep belief that it was the right thing to do.

In Nov 2012, 3 months after committing full time to HLT, we released our Dental Boards Mastery app. It was terrifying exposing the “crazy idea” we had poured so much of our lives into. The app started selling worldwide almost immediately. It was one of the most exciting times of my life watching those early downloads and sales. By May of 2013 we had released our nursing licensure app, which exploded to become a top 10 grossing education app almost immediately

The momentum has grown rapidly in the year since we released the nursing app. We have raised over a million dollars in capital, released 5 new apps, had the #1 grossing education app on android and ios, and helped about 350,000 students. We have come a long ways but feel we are just getting started as we scale our mobile learning platform to help students around the world.

Since our company has grown so fast my typical day seems to completely change every few months. I have been pretty consistent (but far from perfect) about working out in the mornings. I get into the office fairly late, but also stay very late (9-10 pm usually). Everyday is different at HLT, but I focus my time on helping others understand objectives, spreading context/bigger picture, writing strategic plans, and meeting with people outside the organization. I usually spend a couple hours everyday reading business books or watching videos. I’m fanatical about my commitment to learning and improving.

To be productive I plan out each days objectives and top priorities before getting started. I also try to decide the goal and the agenda before any meeting I go to so that we can be sure to be building towards the correct destination.

I bring ideas to life by first brainstorming and coming up with as many options as I can. I often will write out 30 different ways to solve a problem first to expand my thinking, then focus in on the one or two that seem most viable. I’ve been lucky enough to be surrounded by incredibly talented people who have been able to do more of the hands on work after I have thought it through conceptually. From there I remove roadblocks and help teammates to continually reassess the situation to make sure the direction we’re headed still makes sense.

The rapid growth of the mobile and app market. It has opened up so many new possibilities.

Dedicating at least 10 hours a week to learning improving myself.

I have enjoyed every job I have had. If I had to pick the worst it would be working in a restaurant when i was 16. I can’t remember learning that much from it, which is maybe why I would pick it as the worst. I probably did learn some lessons about dependability and responsibility.

More clearly set and get on paper expectations and compensations with teammates. We avoided dealing with it, largely because we had no idea how to and no resources to do it. Setting and managing expectations is a critical thing I wished we would have done more of early on.

Learn as fast as possible through academic resources, mentors, and daily practice doing the job. Most people read a few books and have 1-2 mentors. I recommend reading several books a month, getting 5-6 mentors and then also doing it daily. By doing those things over a long period of time I believe anyone can achieve greatness.

Exposing your idea as soon as possible to get feedback and build product-market fit ASAP. Go to pitch competitions and other networking events and talk to as many people as possible about your idea. Then release your product/prototype to the public before it is quite ready. Ironically you must get the idea out early even though you know it will likely have big problems, the real goal is getting that feedback to make sure your working on the right thing (not what you assume is right). This feedback about your idea takes courage to expose yourself to but was vital in our growth.

We lost thousands of dollars when a programmer was not honest with us. It was really discouraging to have this happen when our business was teetering between life and death. We overcame it by getting help and advice from others in the community.

I would love an app that reminded me to write down a lesson at the end of the day. I do this pretty consistently already, but an app that had push notifications to remind me to do this would be great. Then people could share their lessons and advice with others easily as well. Not sure how it would be monetized, but I know this is something I would want, which seems like the best place to start with ideas.

By the time I die I want to have visited every country in the world.

Google hangouts- I found that having face to face webchats is much more effective way to build a relationship with someone than by phone.

Google Drive- Having interlinked, editable documents has been critical to HLT

Evernote- I use it to keep a roster of our whole team on and I write down issues I want to talk to that person about next time I meet them.

Pivotal Tracker- We picked this up from FullStack development, and it is a great way to prioritize and manage software projects

This question completely depends on the context of the person so its hard to say one. I think the best book i read early on to shape my thinking was “The Lean Startup” and “The Startup Owners Manual”.

What people have influenced your thinking and might be of interest to others?Tim Ferris

Too many others to count…..