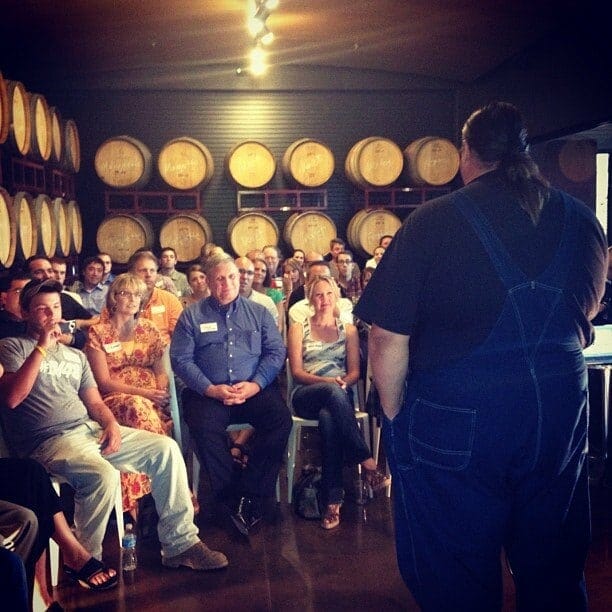 We’ve been on the road for about 5,000 miles now. Maybe 6,000 since I accidentally reset our trip meter. Either way, we’ve been to 15 states so it’s about time for another update. I am typing this in Fargo, where we’re staying with my good friend Colin’s parents house who came out here from Missoula. Thank you Colin.

There is a long list of people who I need to thank and one night I am going to just write up that big ‘ol list. But Ben and Sarah in Denver come to mind, Brock in Fort Collins, Leron in Park City and countless others. More on them later. Also, big thanks to both .CO and eMinutes who have been supporting us so generously.

A lot has happened since my last update.

For one, we lost one. There are only three of us left, as Kelley our filmmaker went home after our stint on a pig farm in Iowa. I wrote about this in more detail here, but let’s just say that when I am not driving Ella (name of my car) across rural America – I am reading “Filmmaking for Dummies.”

Adam continues to do great. That kid is a bundle of energy, and I’ll miss him greatly when he goes back to school in a couple of weeks.

Will has stepped up and taken on some of Kelley’s duties. But I can tell he’s getting pretty tired and is starting to make the kind of mistakes that happen when you’re tired, so he’ll have to slow down and rest up a bit in the coming weeks. He’s actually in a hotel right now getting lots of sleep.

Last week we also lost our social media guy who is going through a sudden seperation from his wife. It’s a terrible situation for him but I hope he’s back on board soon. We need him.

Last, and least we also lost our tripod, which Adam temporarily placed on top of our car and then forgot to load it. Next time something flies of our car and we all go “What was that?” – we’ll stop.

I am starting to recognize the overwhelming nature of this undertaking. There is a lot of pressure, no breaks and a different bed to sleep in almost every night. Adam will be gone in a couple of weeks, and then Collin will join us. Will is leaving to go back to school in September. So at some point, there will only be two of us.

I am torn between bringing someone else on for the remainder of the trip, having folks join us for weeks at a time or just work harder myself. Check out our map of stops – if you’re interested. And email me if you’re game to join us for a bit.

So last week was a tough one on the inside of this Element. But don’t get me wrong – #IM48 is doing just fine.

These are bumps, not walls.

Overall things have been phenomenal. We’re just wrapping up our two-week tour across what some refer to as Silicon Prairie and our experience couldn’t have been more wonderful. We had packed events, listened to some amazing talks and met some of the kindest and most generous people in the world.

Even though this region is going through a terrible drought (and yes, it’s terrible), I am unbelievably excited about the future of this region. There is an energy and excitement in the air here that I really haven’t seen any where else on our travels. That in combination with a bunch of smart, hard-working folks who are always looking for ways to help each other – and I truly believe that America’s Midwest has an opportunity to become an incredible hub for entrepreneurs.

Last weekend we stayed on a pig farm in rural Iowa with my now lifelong friend Carl Blake. Carl is incredible. He’s a former IT consultant turned pig farmer, who decided to make a better pig by breeding a Chinese pig with a Russian Wild Boar. The end result is a pig called Swabian Hall, which originally was bred in Germany starting in 1829. We got spend four days with Carl and his ranch hand Eddie during which we chased pigs, ate one and got to learn about the latest and greatest in both feed production and how to build a hillbilly hot tub. It was awesome. Carl also spoke at our Des Moines event which resulted into the first ticket refund request ever – due to excessive swearing. Thank you Carl. For everything.

In Kansas City we stayed with an incredibly generous family that took us into their home out of nowhere. They weren’t even entrepreneurs, just really nice people who wanted to help. I spent 16 years living in Europe, 15 years living in the US and traveled a fair bit in between – nowhere have I met a nicer group of people than in America’s Midwest. Thank you Ben and Meredith.

We’ve also been getting a major amount of press in the last couple of weeks which has been awesome. I am sure our mothers are pretty proud. I won’t include all, but here’s a listing of them.

I am personally most proud of this one – .

More importantly, we are getting some really nice feedback from our guests.

Also, check out this presentation I gave at the Kauffman Foundation. That was a really meaningful experience for me.

Here is a list of our next 20 stops. If you know anyone in those cities, please let me know. We always need places to host our events, people to speak and couches to crash on. Any connection will be helpful and any help is greatly appreciated. Email me.

I hope that what’re trying to do can make a small difference to some of them.

Thank you for everything.

The show must go on.

For pictures and videos, check out our tour blog at im48.co.

And just so I know what not to include in the next update, here is where we’ve been already.