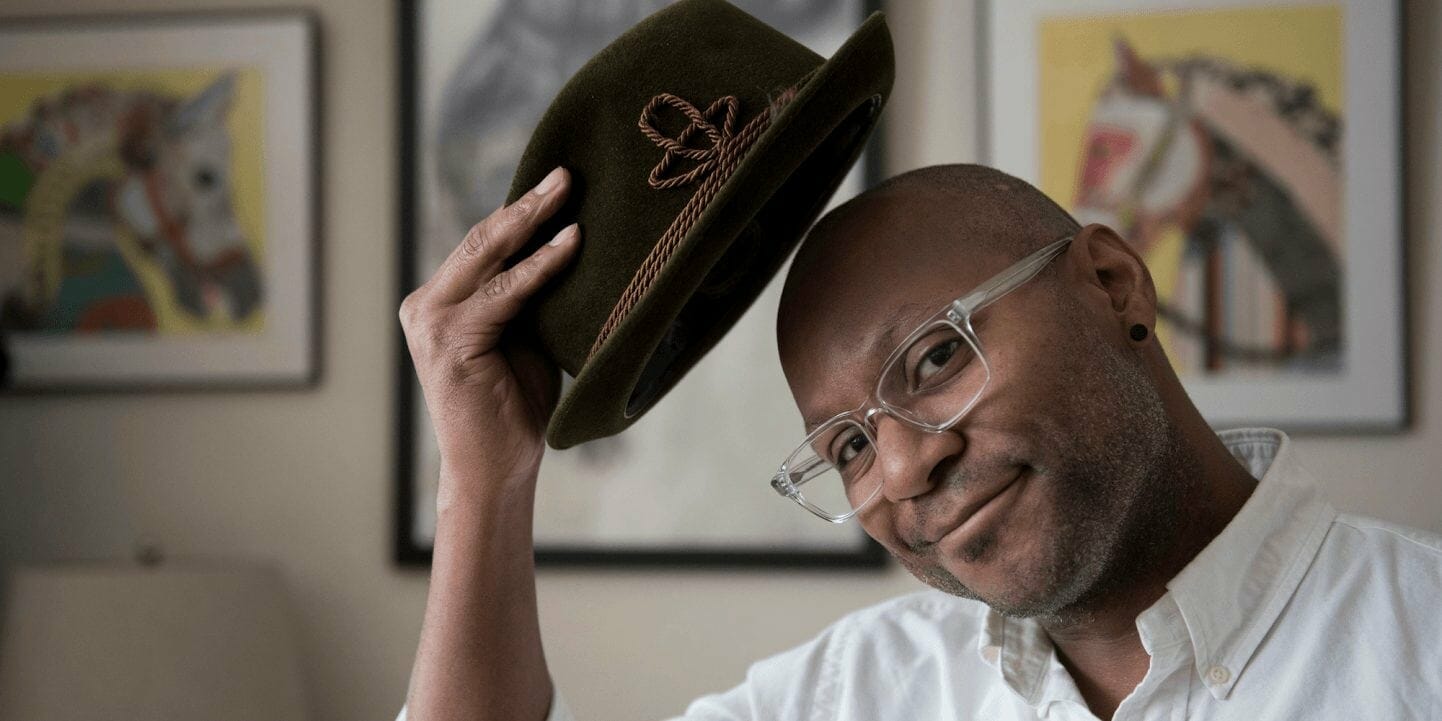 André Hueston Mack is celebrating 10 years as a winemaker. He began his neo-iconic brand, Mouton Noir Wines, after a successful stint as a sommelier (The French Laundry) and wine director (Per Se) for Michelin star chef Thomas Keller. During his first year selling, he sold a humble 330 cases of wine, and ended 2016 selling well over 100,000 cases in 49 states and 13 countries.

His youthfulness and sense of whimsy coupled with his ambition have landed him lucrative commercial partnerships with Owens-Corning, Microsoft, and other brands. He has been featured on ABC’s The Taste, CNBC, Arise 360, and in the pages of Black Enterprise, and Imbibe. And his image graces the cover of Cuisine Noir magazine. He has fans in the tech industry, entertainment (Erykah Badu, Ludacris), in dives and fancy restaurants around the world.

André believes being a black sheep has its merits. He says, “We’ve all been in positions where we felt out of place or not accepted for whatever reason. For me, that’s been my life. I’ve always been that person that stood out. And what makes you an outcast is what makes you unique, and you should harness that. Being a black sheep gives you creative license to do sh*t differently.”

Where did the idea for Mouton Noir Wines come from?

The idea for Mouton Noir Wines came from my days as a sommelier/wine director. I had worked for a Michelin star chef – Thomas Keller – and really had reached the ceiling in my profession in restaurants. After weighing other options, and even executing other options, I decided that I wanted to make wine.

I don’t have typical days. There are days when I share parenting duties with my wife and have to tend to my three sons while juggling wine business. There are other days when I’m up super early to tend to wine business to catch an early flight to one of the markets where my wines are sold. The staples of my days include family, working out, wine, wine, work, wine, and more family. Unproductivity is a non-option in my business. I will be productive. Period.

An idea at a time. It begins as a thought, then it turns into some sort of planning and strategy, and if it’s really good, I focus until it is finished.

People owning their own media content. People becoming self-contained media companies. Instead of waiting for a major outlet to discover and develop you as talent, you create your own media. I’m not certain that at this point it is still a trend, but with new technologies every day, it is becoming increasingly easier to create something new and fresh without fear of competition. With Facebook Live and Instagram Live, a person can speak directly to an existing audience, and give them content. It’s instant engagement too. That excites me.

I’m not sure if it is a habit so much as it is a mindset. I refuse to let anyone or anything discourage me. It takes work to think that way. I will receive advice and consultation, but I will not allow anyone to plant seeds of discouragement in me. You can hear and feel when someone is really imposing their fears on you. Projecting. Maybe they can’t help it, but I have a right not to make their fears mine.

Ambition is lonely, so get used to it.

It’s okay to say goodbye to unsupportive people. It’s okay to limit contact and the role unsupportive and discouraging people play in your life. Some people never realize their dreams or see a vision to completion, because they are more concerned with those close to them think. I say rubbish. They’ll be fine, but you won’t be. Let them go, or limit their contact.

Purge. Get rid of habits, procedures, and attitudes that no longer serve you well.

Value and leverage relationships as resources. Doors open because of people, so it is important to treat them well. People resources are like money. Mouton Noir Wines began with a wealth of relationships and no money.

Would it be a failure if you learned a valuable lesson? While I don’t count it as a failure, there was a time I was willing to forgo my dream of being a winemaker to do some other wine-related thing with partners. In hindsight, the partnership was a bad idea and only a safe decision. The safe thing almost cost me my dream.

The best $100 I spend is always on my family, and that is either spending it on my business or spending money gleaned from that business on them.

The voice notation app I use on my iPhone. It saves time. I don’t have to type.

There is a series of vintage books, New York Public Library has some online in their digital collection, but it is “The Negro Motorist Green Book” by Victor Hugo Green. The book was created for black drivers during a time when they could not always get accommodations at hotels and restaurants. Victor Green created these guides so that car travelers knew where they could safely go to eat and lodge. Those books are amazing, because they show you how entrepreneurship is heritage in this country. All of those black-owned businesses thrived and survived and were part of the economy of their communities. This country was built by small businesses and resourcefulness. The books are easy reads, and if anything, they demonstrate promise.

I don’t have one. I do, however, appreciate this quote.
“Keep going, no matter what.” –Reginald F. Lewis