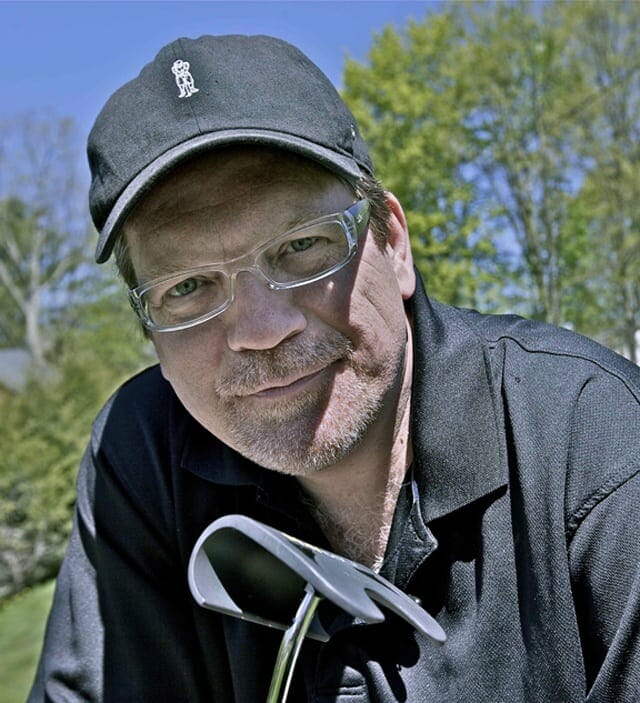 [quote style=”boxed”]Belief and persistence. Most people will tell me they would have given up by now, most people take “no” as an answer. Most people aren’t trying to do what many of us are wired to do – make something or do something different.[/quote]

Brian Wittman is a serial entrepreneur with more than 30 years in the creative industry. He started off as an illustrator, photographer, graphic designer and now writer, producer and multi-award-winning creative director providing his insight to a wide variety of clients in different industries including biometric security, publishing, telecomm, entertainment, fashion and product development.

Brian was priceline.com’s original creative director from its inception and was responsible for all of its design and branding, helping to make it the third most recognized brand on the internet.

Several brands were conceived and launched by Brian, prior to MxVGolf including the tiedyetie – neckties for the (then) thirtysomething pre-MadMen ad set, Cigargoyles – watchmen of the humidor, CigarWitt stogie- inspired apparel, GuitarGoyles – metal guitar picks and a national brand of savory condiment – relaunching in 2015.

In his “spare” time, Brian enjoys travel and not traveling, the art of photography, the anticipation of the return of Tri-X 400, struggling with music theory as it relates to his guitar collection and tending to thriving organic garden, between the weeds.

The MxV2 – I’ve taken in all the constructive ideas and features that came after we locked down the MxV1 for production and I’m putting them into next year’s model to launch in January.

Where did the idea for MxVGolf come from?

The company was formed based on an idea I had to “reinvent” the golf putter. Like most new golfers I struggled with the part of the game that makes up almost half of it – putting. I happened to get that “a-ha” moment while looking at the Newton’s Cradle sitting on my desk.

Why was a putter flat faced and not round like the ball?

Almost three years later, we have the MxV1 putter, scientifically proven to perform more accurately than the #1 putter on tour!

Eventually, we’ll make money by selling units – gaining tracking through retail partners (some online) and national exposure with early adopting pros that play our putter on tour. This will cascade into an “acceptance” that today only person-to-person demos can provide. We also have an infomercial that will need the same national exposure to explain our science and performance. We’ll also make money when a larger equipment company decides they’re interested in licensing our intellectual properties (our patented design and Center Strike Technology®).

No two days are alike actually. I have the luxury of working from home and enjoy my flexibility. I have a fiancée, a 16-year old son and two dogs – their love and support feed and inspire me so I tend to wrap the daylight hours around the necessary “balance” of working too much and never enough. So I work late into the wee hours when things tend to be quieter.

Belief and persistence. Most people will tell me they would have given up by now, most people take “no” as an answer. Most people aren’t trying to do what many of us are wired to do – make something or do something different.

A return to communicating face to face – oh right, that’s not happening anymore – then I guess it would be augmented reality and artificial intelligence – cause we all know our reality and intelligence could use some augmentation.

I packed stale meat into a test extruder at a food plant that made soups. That taught me the age old adage – do what you love and love what you do.

A chain is only as strong as its weakest link. I would choose my support team carefully and be sure to have a financial runway. Try not to be the smartest one in the room. With the benefit of hindsight we always have the wisdom to operate as if things aren’t happening so fast and furious – that decisions need to be made NOW and can’t wait. If I could afford to slow it down I would but it just doesn’t work that way once you get started. My intuition has both helped and hindered me in the many businesses I’ve attempted, but at the end of the day, I still come out ahead.

Focus, listen and laugh. Be interested and you’ll be interesting.

Failure is a natural part of the process. For me it’s been more about failure to know enough about a particular part of the business that creates a barrier to success. How I’ve overcome that is to surround myself with the right people, ask the right questions and rely on the experts to guide my decision making knowing full well that I’m the one responsible for that decision. Own it.

Organic, non-GMO, hippie dippie jazz-playing food truck in every metropolitan city in the US (with an accompanying smartphone app).

I could rant here but I won’t. We just don’t seem to communicate the same as we used to. Since we stopped looking at each other’s faces and now look at screens and texts, I believe we’re more anti-social than social. We have all the tools but at what cost? We change it by being the change we want to see. Our own culture, here at MxVGolf is employing as many tactics as we can to return to the days when communication was personal.

I love the ocean for its inspiring negative ions and the calming sound of waves crashing, but I’m afraid as hell to go in it. I don’t swim (yet).

We can’t live without Google it seems. I use it everyday. LinkedIn is helpful and dare I say Facebook, no scratch that, Constant Contact.

Sun Tzu – The Art of War – read it and discover why. Its got everything from spirituality to business strategy – all wrapped up in this ancient little book that has stood up to the test of time.

Between my fiancée, son and dogs I laugh everyday – sometimes it seems its all we do – but I can always count on a laugh every night when I’m the “target” of the two humans who like to point out how ridiculous I can be sometimes – because if you can’t laugh at yourself… how does it go? you won’t get fooled again…? You know what I mean.

I’m not big on hero worship, so many people inspire me to do the best I can, to not give up – but I do get a kick out of Ford. Imagine having the insight to create something that everyone will, eventually, come to accept, use every day and he’s depending on their acceptance to be successful, right? But he reportedly says – “you can have any color you want, as long as it’s black!” – now that’s gutsy.

Why bother? What is it about the self-employed person, the entrepreneur, that is willing to “risk it all” for an idea they strongly believe in?

Simply, it’s worth it.

At what point do you make the choice to make the “leap” into following your “dream” or ideas to fruition?

For some its a natural evolution, we have “regular” jobs, “normal” lives and in the back of our minds we’re thinking, “there’s got to be something more…” so we challenge ourselves to discover where that “noise” is coming from, what does it mean, where is it telling us to go -and we go. I would encourage anyone with that ache, that desire, to pursue it. You may not know where it will take you but you may just be in for the ride of your life!