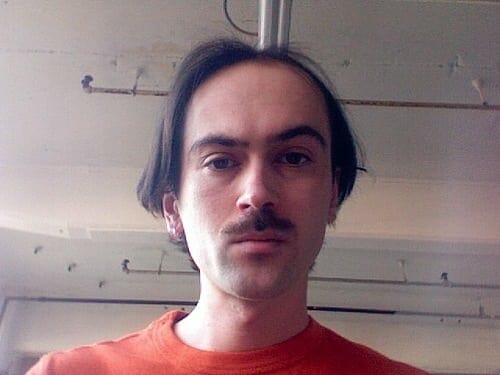 Chester “Chet” Lockhart was born the first of 23 children in a community living compound just outside Provo, Utah. Spending much of his life amidst chaos that can only be described as Lord of the Flies-ish, Chet experimented with a variety of ways to bind, harness, restrict or otherwise maintain control over his siblings.

At the age of 18, while wrangling his brothers and sisters at a Salt Lake City Zoo outing, Chet lost his 12th youngest sister when she vanished and found herself in the Komodo Dragon feeding chamber. Amidst the pain of losing his kin in such dramatic fashion, Chet vowed to his family he would develop a better solution for keeping his brothers and sisters on a tighter “leash.”

Starting with a small dog backpack with a tale that doubled as a handle, Chet quickly realized his creation looked like a dog humping a little kid and swapped it out for a monkey, which seemed equally as inappropriate, but less obvious to the public at large.

Five years later, with distribution in 60 theme parks and every Walmart in America and the EU, Chet now runs a child leash empire from his condo in Valencia, California and is considered one of the greatest inventors of his generation.

I’m currently developing a harness for hanging babies on the edge of bathroom stalls while parents use the toilet. It’s an alternative to putting them on the floor. You can see the prototype here, but keep in mind we’re still working on the design.

I also document the evolution of my invention at www.childrenonleashes.com.

Wardrobe Matching – Children, much like dogs, are being used as accessories. Just look at Madonna, Sandra Bullock and Brangelina. Color coordination between pet and child is very in and we’re make sure to reflect these trends in upcoming leash designs.

The Switcheroo – That’s what I call it when I see someone carrying their dog with their child on a leash. Just a little reminder of my genius and how I’ve shifted the family dynamic forever. You can just feel jealousy in the air.

Heelys Shoes – I know these have nothing to do with child leashing, but they’re pretty sweet. And as the childhood obesity epidemic grows, they could be a lucrative partnership for us as child towing becomes more prominent in our culture.

I keep a dream journal and document my genius every morning. Most ideas have to deal with leashing or other forms for human restraint. If an idea is worth exploring, I pay some nice people in an old warehouse in East Los Angeles to build a prototype, then ship it off to China to get stuff made cheap. It’s legit though, no iPhone factory.

Some are inspired by the Thomas Edison and Henry Ford’s of the world. I’m inspired by the creators of the Snuggie, Magic Bullet and anything Ron Popeil sells. Do you realize how much cheaper it is to make beef jerky for more than 20 people yourself ? Or to always have a fishing pole or can of hair on hand?

I let my little sister get eaten by a Komodo Dragon. Thanks for bringing it up again.

I never got into “books” but have been a subscriber to Sky Mall since 1994 and I ordered that memoirs of Billy Mays. My best tool is probably the People’s Republic of China, which pumps out over 1 million child leashes a year on my behalf.

The Baby Bubble. It’s like a hamster ball for babies to keep them safe from chemicals, choking hazards and island dwelling lizards…or scary dogs.
Be warned, however, as early tests have shown that babies may have trouble navigating stairs, a discovery that led us to stop production.

Who is the one person you’d love to see interviewed on IdeaMensch?

Billy Mays, but you’re too late. Thanks for bringing it up again.

Do you have a patent on all child leashes?

Due to a federal court ruling that child leashes are pretty much the same thing as a backpack and dog leash, pet supplies manufacturers have been quick to cash in since being denied a patent. However, any monkey, koala, sloth, frog, fox or panda bear leash you see – that’s all me. Please only purchase these items for your children.

What do you like to do in you’re spare time?

I play  World of Warcraft where I lead a pack of rabid dwarves on leash. It’s awesome.

You can always hit me up at [email protected] and of course you can peruse the ongoing documentation of my glorious invention at www.childrenonleashes.com.