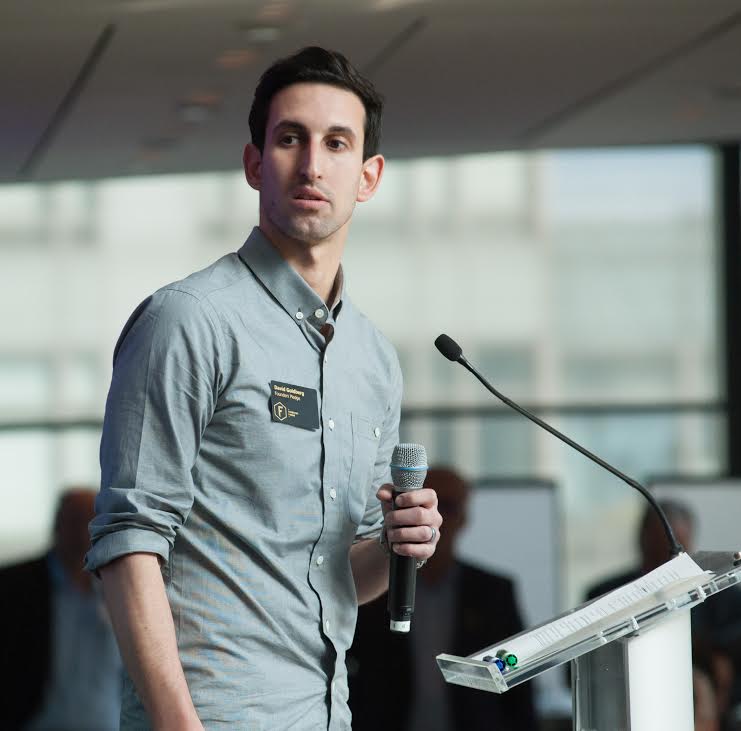 David Goldberg is co-founder and CEO of Founders Pledge, a global initiative that helps tech founders and investors translate their commercial success into social good. A U.K. registered charity and a 501(c)(3) nonprofit in the U.S., Founders Pledge has garnered 535 pledges across 21 countries worth over $140 million. Since October 2013, the foundation has deployed $10 million from 14 exits.

Where did the idea for Founders Pledge come from?

Before starting Founders Pledge, I ran an initiative to support social businesses with money, mentoring, and technology. But after distributing nearly 1 million pounds in grant funding with only marginal success, I realized a new strategy was in order. So instead of helping social companies succeed and settling for frustrating results, I chose to help already successful companies and founders do good.

No two days are the same, but I always start by reading through emails from the night before and building a list of the day’s action items. I then go over them with our program coordinator and delegate responsibilities to the team. Next, we do an “all hands on deck” meeting so everyone is aware of what others are up to. After that, I typically spend a couple hours working on my action items, and I’ll eat a late lunch — if I eat at all. Whether I’m in the U.K. or Los Angeles, I usually reserve the day’s latter half for operations across the Atlantic. I take meetings as needed throughout the day, and I spend a lot of time on planes.

First and foremost, I hire amazing people. I have a million ideas per minute — not all of them great, of course — so I need smarter and more productive people to identify the best ones and bring them to life. The main things I bring to the table are passion and energy. I strive to view ideas from a perspective of utility. If we weren’t doing this, what would the loss be? If we did do it well, how many people would benefit?

What is one habit of yours that makes you productive as an entrepreneur?

Whatever the topic or challenge, I always get straight to the point. Superfluous niceties, in my opinion, should be left outside of work. Not only does pragmatism save me precious time, but it also resonates with the people I communicate with. Transparency makes things simpler for everyone involved.

Every job is a learning experience, so I don’t think it’s particularly useful to think of work in terms of “best” and “worst.” If I had to pick one, though, I’d have a few contenders to choose from.

I briefly worked with my dad, which taught me to never mix family and money — a lesson I should have already known. Later, after I sold my business in Germany and moved to Los Angeles, I worked as a traffic data analyst. I wanted something to keep me busy while I was going to university, so I took a part-time gig optimizing traffic flows for municipal governments. I learned pretty quickly that you can spend your life doing mindless things, but without passion, routine becomes tedium.

To be honest, I’m not sure I’d do anything differently. The choices I’ve made have led me to where I am, and I’m happy with that.

As an entrepreneur, what is one thing you do over and over and recommend everyone else do?

I always ask myself, “Is this mission-critical?” It’s so easy to lose focus in a sea of options, and when you’re running a high-growth business, a lack of focus leads to failure. When you’re presented with a choice, ask yourself whether one route is a must. If the answer is “yes,” take that opportunity. If the answer is “no,” leave it. Never be afraid to kill bad ideas.

Founders Pledge helps entrepreneurs give to charity when they’ve achieved success. We know it’s easy to say “no” to that kind of proposition, especially when the entrepreneur is stuck in the muck of growing a business. Because of that, most people do say “no” — at least first.

My strategy has always been to make it easier for someone to say “yes.” Part of that is not taking “no” for an answer, but more importantly, I always strive to be a real, authentic person. By creating a relationship, I make it easier to say “yes” and more difficult to say “no.”

Founders Pledge works to highlight commonalities between ourselves and our pledgers. By establishing those commonalities, we don’t just encourage pledges to charity; we create deep relationships built on reciprocity.

My first business was a film production company in Los Angeles. I’d just left finance, and I wanted to do something that excited me. My first mistake was to assume that making movies would be easy. Turns out — big surprise — it’s not. Six months in, the writing was on the wall, so I decided to stop wasting my time and money. I learned some about film, of course, but more than anything else, I learned to acknowledge when something’s not working. In a sense, I didn’t truly overcome it; I accepted it and moved on.

I’m convinced there’s big opportunity in preventing food waste. Not only could this do immense good, but it could also make someone a lot of money. It makes no sense, financially or ethically, to produce food that is destined to be wasted. What we need is a structure to help repurpose it. There’s plenty of supply and lots of demand for food; what’s missing is the link between them.

My team and I use HelloSign every day. The user interface is brilliant, and the software has made what we do — getting founders to sign a pledge — so much easier. Other than that, we use Streak, Gmail, Clearbit, and Yesware for inbox management. For prospecting, we use DueDil, Mattermark, and Conspire. We communicate through Slack and WhatsApp. Calendly helps us schedule efficiently. Trello is our go-to for project management. Airtable keeps us organized, Dashlane saves our login details, and Spotify keeps us sane.

What is the one book you recommend our community should read and why?

I’m a book nerd, so I have to recommend more than one:
“Time Enough for Love” by Robert A. Heinlein
“A Deepness in the Sky”  by Vernor Vinge
“Doing Good Better”  by William MacAskill, which — full disclosure — is written by my friend, but it provides an excellent analysis of the charity sector and how to maximize your impact

Wait But Why  is my favorite place on the internet.
William MacAskill helped me to think about charity in a whole new way.
Jennifer Pahlka gave an excellent TED Talk about how open-source software could be used to rethink government.
Dan Pallotta’s TED Talk also shaped my thinking about how to evaluate charities’ impact.
Peter Singer’s TED Talk helped me to appreciate how to give altruistically and why it’s so important to do so.