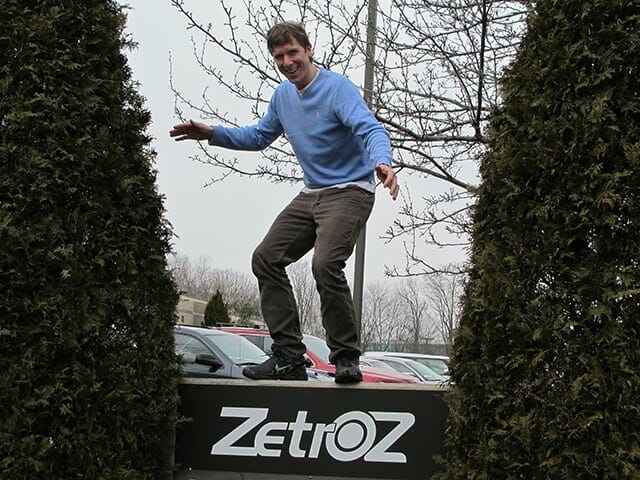 [quote style=”boxed”]We are constantly generating innovative tactics and design changes. We’ll throw an idea on the board; the next thing you know, we’ve drafted prototypes. An engineer then builds it; the next day, it’s being tested. We have an extremely fast turnaround, creating a concept, building the model, building it up to a function, and testing it — that can be done in a matter of a couple of days.[/quote]

We’ve done a lot of consumer work with our device. We did some human factor analysis, and the results are coming back strong. We’re in the process of really locking down the design for manufacturing the wearable ultrasound system. As a startup company, you go through different phases. We are at that final stage, where we have awesome technology that works. People like that we manufacture it as inexpensively as possible; we’re trying to do all our manufacturing in the United States. We want to work with a local company, so we’ve been touring different facilities and discussing ways to drive our price down.

My typical day is constantly changing. I used to be in the lab all the time, where the engineers could use me as a sounding board if they ran into trouble with the electronics or the execution of the design; these days, we’re in the next phase of manufacturing and design. We’re touring various manufacturing facilities in Connecticut and New York, verifying that our suppliers can meet our needs and scale with us, so I have days in the office and days when I travel. I have an open-door policy, so everyone knows they’re welcome to stop by and talk shop. We often have ping pong matches during lunch, adding a bit of fun to everyone’s workday. I leave work around 7:30 p.m. to head over to the fixer-upper my wife and I recently purchased. We work on the house until 1 or 2 a.m., painting and renovating; we find it incredibly relaxing, and it’s a great way to finish the day. Then, I pass out for a couple hours and show up the next day at 8 a.m.

How does your team bring ideas to life?

We are constantly generating innovative tactics and design changes. We’ll throw an idea on the board; the next thing you know, we’ve drafted prototypes. An engineer then builds it; the next day, it’s being tested. We have an extremely fast turnaround, creating a concept, building the model, building it up to a function, and testing it — that can be done in a matter of a couple of days.

I am excited that there are more medically-oriented devices being created, and that the consumer healthcare marketplace is becoming so tech-savvy. We are even seeing a breakthrough in our own devices, such as with the ultrasound system being utilized by the consumer. This movement allows sales to pick up and prices to drop.

I had a job working for a corporation’s research organization. It was the worst job I’ve ever had because I was given the same menial task to complete every day, but they wanted someone with a PhD to do it from a regulatory compliance standpoint. I remember going to work, just dreading what I was going to do. There was no creativity involved, and it was really just doing tests and measurements. I realized I wasn’t meant to work in a large company or a bureaucratic organization. My personality, and the way I like to create and work, just didn’t match up.

What is one business idea you would be willing to give away to our readers?

I have been using LinkedIn as a research tool, and it’d be pretty cool to have a software algorithm that could utilize your resources in LinkedIn to find information about marketing and assess how people are doing their jobs. For example, you could create an analytical tool to search where people graduated from and make a direct correlation to where they were hired. You could then use your findings to boost your hiring profits.

I think I would get a PhD in quantum physics, instead of biomedical engineering and, potentially, be one of those crazy physicists developing new theories.

As a business leader, what’s one thing you do over and over, and recommend everyone else should do?

I always try to motivate my employees. I have an open-door policy, and I think that’s really important. If you’re leading a company and you have a bunch of talented individuals who are in challenging situations and you want to build camaraderie, brainstorming sessions and open-door policies allow your team to talk through things that need to be done. It is so critical for any sort of small business.

What’s one failure that you think you’ve had as a business leader, or the team, and how did you overcome it?

Early on, we got a lot of pushback on raising our financial backing to support the product launch. A lot of that failure came from our lack of proficiency in the language, preventing us from really making the case for the technology and the product. At the time, we lacked credibility and experience — we struggled a lot by not creating the right story. Bringing on advocates, both from the medical community and the investment community, developed our reputation.

If you could change one thing in the world, what would that be, and how would you go about doing it?

I personally feel like one of the greatest challenges to mankind is cryptic knowledge. In westernized civilization, knowledge is abundant, but there are a lot of different cultures that don’t have access to the information we do. Even in Asia, there’s a lot of governmental scrutiny on what they have the ability to access online, and what sort of information gets in and out of those countries. I would develop a method for improving access to shared knowledge. We’re going to have to bridge those various cultures and ideas in order to be a successful society. We need a strategy for getting into space and the next frontier. If we can share knowledge and educate the masses, we can do that.

I am extremely afraid of flying. I want to learn how to fly, and I don’t mind flying in small airplanes, but I hate commercial aircrafts.

What are three of your favorite online tools or resources that you use, and what do you love about them?

I love Google Scholar because it’s a pretty robust search engine that covers patents, as well as academic articles. It’s useful when researching current literature and up-to-date innovations in science.

I am becoming a huge fan of LinkedIn for multiple reasons. It allows you to see where people get hired, what their experience is, what their interests are, and even what others from the same background or company have done.

I also really like Dropbox because it allows us to share so much data at our company. We have hundreds of gigabytes of data on Dropbox; it’s everything you want in an online tool: useful, efficient, effective, and cost-effective.

What’s one book that you recommend the community on IdeaMensch should read and why?

“Ultrasonic Testing Materials” is about different ways to test ultrasound. Most people would find it incredibly boring, but I got so into this book. I read this book on my honeymoon, while my wife was reading “50 Shades of Grey,” to put it in perspective.

When was the last time you laughed out loud, and what caused it?

We play ping pong every day at lunch now, and the competitions have made it absolutely crazy. People have some crazy moves, and we always laugh when we play because you never know what someone’s going to do!

My dad is my hero. He is probably the most intelligent individual I know — he’s very down-to-earth, very passionate, and a good family man. You know, he’s just an all-around awesome guy. I really look up to him. In all regards, he is a mentor and hero.

What made you want to focus on ultrasound technology?

Back in middle school, I worked in my dad’s lab at Interlogic in Peabody, Mass.; my dad was a director of ultrasound research and development. I didn’t really understand what I was doing, but I knew I was working on ultrasound devices. I got to play with some of the imaging systems and the various devices that Interlogic was commercializing.

What is the best part about working in Trumbull?

The best thing about working in Trumbull is that we have an awesome location and an awesome facility. We’re centered right next to Bridgeport, which is a major industrial town. It’s in hardship right now from the economic downturn, but it’s starting to pick up again. Bridgeport is just such a fun city. It’s got good food, and we have a diverse ethnic group here. Our facility is fantastic — we have brand-new labs and offices, and lots of space. The community has been really behind us. People come up to me and say, “Hey, we’re really excited to have you here.”