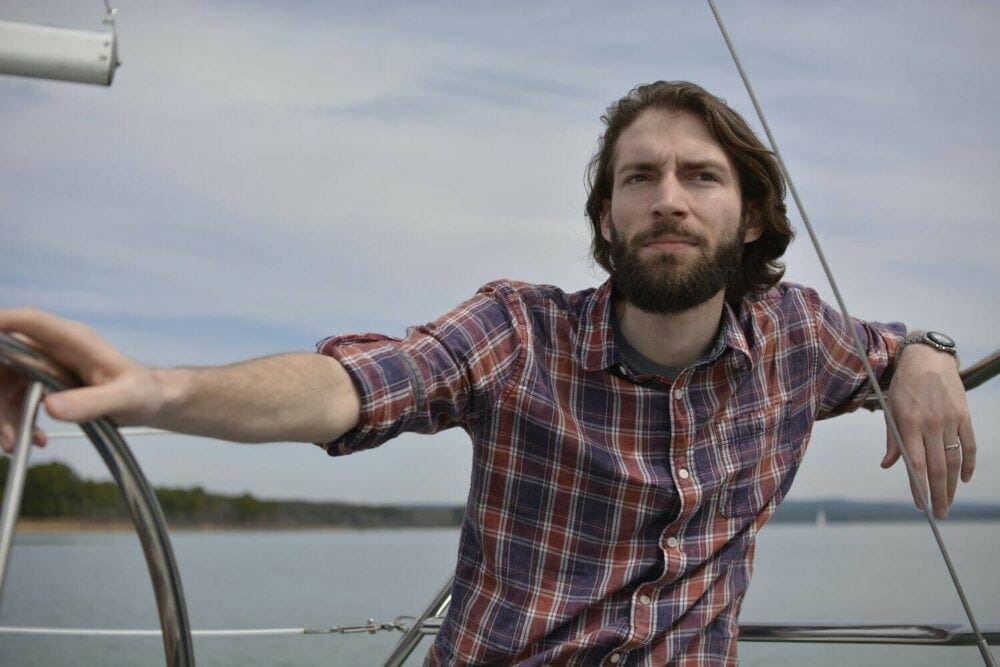 If I had to nail down one thing that helps growth, it’s simply to keep on going. One of the faults of today’s lean startup thought process is that many founders give up too soon. Things worth doing don’t happen overnight.

Gil Gildner is the cofounder of Discosloth, a marketing startup that revamps the way businesses pay for digital advertising. Discosloth passed a million dollars in ad spend during their first year, gaining dozens of clients in every continent (except Antarctica!)

Prior to starting Discosloth with his partner, Anya, he freelanced as an international photojournalist and creative director. Gil’s book, Write The Other Way, covers some of his adventures including wearing a hazmat suit through a Liberian ebola unit during the 2014 outbreak, bribing a Kenyan border guard to let him leave the country, hiking glaciers in New Zealand, driving motorcycles through Uganda, and getting stranded in India.

Gil is a fan of cars, blockchain, music, beer, decentralization, and travel. He’s visited coffeeshops in over 40 countries and adds more each year. Gil currently splits his time between Little Rock, Arkansas and Chisinau, Moldova.

Where did the idea for Discosloth come from?

We’re called Discosloth. We usually get one of two responses when someone hears our name: either “that’s an awesome name!” or a slightly confused look. But that’s what we wanted. We were tired of digital marketers taking themselves entirely too seriously. We wanted something ridiculous and brandable. So we’ve got a neon pink dancing sloth as our mascot.

I usually wake up before 7:00, eat breakfast, and start work around 8:00. I learned a long time ago that I work in spurts. Sometimes I work for 12 hours straight, other times I just go to a coffeeshop to read. Ultimately, things get done either way. For a few years I tried to moderate my habits, but in the end I learned to manage my spurts of energy by working only when I need to. Otherwise I’ll just waste time at a desk.

I spend a lot of time sitting and thinking. If I’m needing to come up with a solution, chances are what I will do is get on the subway, head to a coffeeshop, get a strong black coffee, and jot things down in a notebook. Ideas usually happen.

Decentralization. I think that the status quo is rapidly being broken down by technology, and a lot of the traditional establishments are going to be radically altered. Academia, banking, and work in general: all are being split apart and democratized to a level never seen before.

Waking up early is very important to me. I didn’t always wake up early. In my former life as a freelancer and employee I wouldn’t get up until 8 or 9. But I found out that an early start lets you fit so much more into the day. I can get most of the work done by noon. I rarely work afternoons.

In college, I took twenty hours a semester and held two or three simultaneous jobs. I graduated in three years. So I think I’d actually tell myself to loosen up and party a little more while I had the time. Either that, or drop out. I’d also tell myself to just do whatever I wanted: I was too cautious, and I should have taken risks earlier.

I believe that you can do anything if you want to badly enough. I’ve traveled extensively (41 countries and counting!) and met hundreds of people from all walks of life. Some people say that access to education, politics, money, or intelligence limit what you can do. And that’s surely a factor. But I’ve met so many people who have overcome all odds to become startup CEOs, business owners, travelers, or even billionaires. I think it’s actually how doggedly you try.

I try a lot of ideas, and most of them fail. But I keep on trying, and some of them work. I’ve probably worked on twenty or thirty ideas in my career. Perhaps five of them have worked. But all of them have been worth it. I encourage everyone to do the same: keep on trying.

If I had to nail down one thing that helps growth, it’s simply to keep on going. One of the faults of today’s lean startup thought process is that many founders give up too soon. Things worth doing don’t happen overnight. We started Discosloth a year ago. It was two months before we even made a sale. I was about to quit, but Anya encouraged me to keep going. Last week, we just passed a million dollars in managed ad spend.

One of my ideas was a dropshipping business that sold niche art products. We spent so much energy in developing this store and marketing to the community. Two months later, we’d barely broken even and it was taking up a lot of time. We sold the business and went on to other ideas.

I fly a lot. I think someone should make an app that lets people find others on the plane, and swap seats with them. Some people like aisle seats, others like window seats, and some prefer the back of the plane. Passengers could even make a little money back by upselling their seats. Airlines would hate this app if it takes off…no pun intended.

I spent $100 on LinkedIn advertising last week. Of course, this is what Discosloth helps businesses do, but it was important that we practice what we preach so we decided to test their new LinkedIn Lead Generation ad campaign. Amazingly, that $100 got us two incredibly qualified leads.

If it wasn’t for Google Docs, I don’t think our company would exist.

The book I’ve been recommending to people since it came out is “Zero to One ” by Peter Thiel. As a fellow contrarian I get a lot of value from his thoughts.

“If they give you ruled paper, write the other way.” This quote is by Juan Ramón Jiménez is on the first page of Fahrenheit 451. I titled my first book Write The Other Way because I think it’s such a strong emotion.