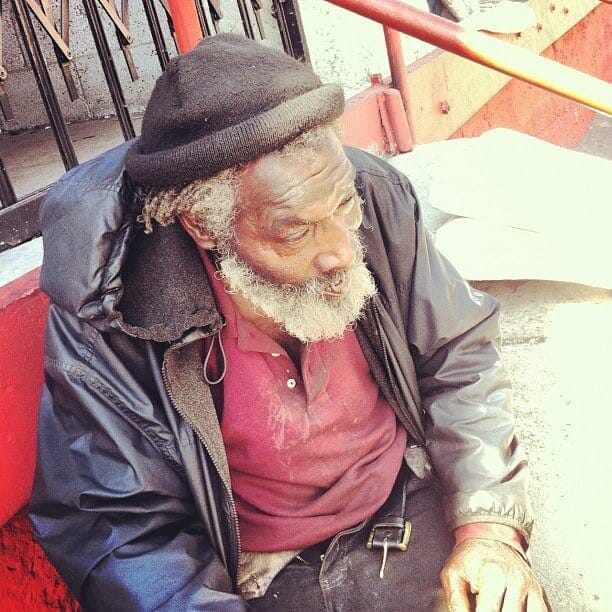 For all intents and purposes, I am incredibly selfish.

I grew up with a very young mother who made a lot of sacrifices in her life and career, so I could have opportunities that she never had. She always empowered me to go the path I believed to be right, which is how I ended up as a 16-year old immigrant by myself in America. Couple that with a rather unhealthy dose of mental illness on my father’s side, and you’ll find me to be a highly fragile individual who can crumble under the weight of personal expectation.

On the outside, that makes me the selfish asshole. On the inside, I am honestly just weak.

When my girlfriend and I came back from Europe, we moved into a temporary loft downtown LA. It was large, available on short notice and there was plenty of space for our two cats.

Outside of our factory loft lived an homeless named Gregory. I’d walk past him every day. He’d never beg. He’d never say anything. He’d never even acknowledge me.

One day when we came back from a nice dinner, I decided to ask him if he wanted to have my leftovers. He took them, and that was the day that we started feeding Gregory.

One night I met a couple of nuns who also came and visited him. They were telling me that Gregory has been homeless for over 20 years. Nobody knows exactly what happened to him, but he’s the nicest and most harmless homeless person they ever met. He stays away from all the other homeless people because some of them do bad things to him. He doesn’t want help.

Gregory literally just sits in front of this old warehouse all day long. He never told me, but my guess is that Gregory has seen a lot of bad in his lifetime. He didn’t have the same opportunities that I had, or maybe you did.

Fast forward a few months. My girlfriend and I moved back to the Westside, and eventually broke up.

I haven’t been able to go down there every day, but once a week I do buy a couple of bags of groceries and bring them down to Gregory. I also buy him some cigarettes and from time-to-time some batteries for the radio I got him.

I crumble under expectation.

My guess is many people have given up on Gregory before.

My guess is that Gregory has given up on himself.

I can’t give up on Gregory.

I know this weekly grocery run doesn’t solve his problems. But maybe, and just maybe, it makes him recognize there’s some good in his life. Maybe he recognizes that I really do care about him.

So, before I can go on this crazy road trip – I need to find someone to drop of a bag of groceries for him once a week. I will, of course, give you the money for the groceries. And if you’d like – I’ll pay you to bring them to him.

All I ask is that you never miss a week.

If you live downtown, this should be really easy. Or even if you work there. Gregory is totally harmless, and there really is nothing to fear. There’s tons of security, a gas station right across the street and an Urth Cafe next door.

If you, or someone you know can help – please email me at mario at ideamensch dot com. Please forward this to folks who you think might be able to help.