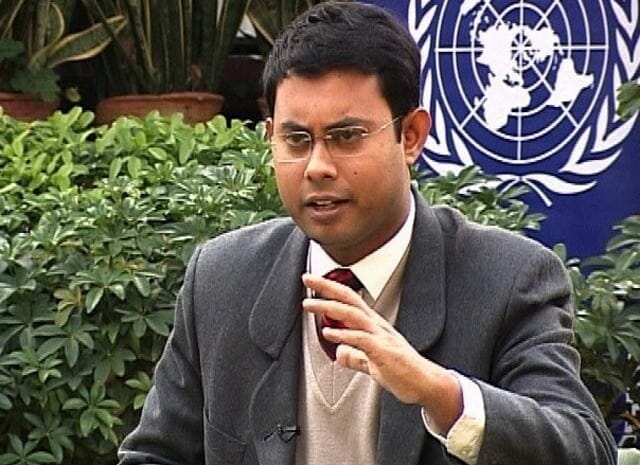 [quote style=”boxed”]Start earlier. I sometimes feel I wasted a lot of time. I could have started a few years earlier.[/quote]
Hindol Sengupta is the founder, along with fellow journalist Shweta Punj, of the Whypoll Trust, India’s only open government platform. Hindol has worked for more than a decade as a journalist at some of the best organizations in the world including the Associated Press, Reuters, CNBC-TV18, CNN-IBN, Bloomberg UTV and Fortune magazine. He is the author of India’s only two books on the business of luxury. He has been a radio jockey on All India Radio, India’s national radio service. He was the anchor of the prominent weekly political interview show Talk Back on Bloomberg UTV. His new book, The Liberals is about living through 20 years of Indian economic liberalization and will be published by Harper Collins next spring.

With Whypoll, we are working on applying technological solutions to get people in India connected more closely to their members of Parliament. We are working on how to create interfaces that provide better access to lifesaving drugs and medical facilities. Our idea is best explained in a couple of phrases – safety net-working and protect-working, which basically explain our core idea that if indeed the world is becoming more connected, and sometimes one is not entirely sure, but if it is, then connectedness ought to also enrich empathy. You see, one of the flaws, it seems to us, of our world in which 6-degrees of separation is now ostensibly down to 4 or even 3 degrees of separation, is that in many ways we are more alien to each other than ever. It is unfashionable to speak of our old safety nets of family and a close network of friends who are as close, if not closer, than family. We have a thousand people on our Facebook lists yet fail to have a conversation with our parents, lovers, brothers, sisters or spouses who are in the same room. We constantly like each other and each other’s words and thoughts on Facebook and follow them on Twitter but cannot have a conversation and cannot smile at each other on the street. We no longer have many 3:00 AM friends left.

Please notice that I speak more in terms of ‘our’ rather than just me. It is because I believe that whatever I do is not only done by me. Any achievement is the result of the work of a group of people and not just me.

I am explaining this because to understand what I am working on, it is important for me to try and explain why I do what I do.

I have just started research on a new book which tries to understand contemporary Hinduism from a very personal point of view. It is perhaps the oldest faith in the world, predating Christianity and Islam by several millennia. It has more than a billion followers and yet has fallen off the map in popular discourse regarding the future of the world.

I am also working on creating a few communities that look at reviving traditional artisanship and research impacts of Indian soft power around the world.

Where did the idea for Whypoll come from?

Whypoll came from a conversation between me and the other founder of Whypoll, Shweta Punj, in which we began by asking the question: what does the act of voting or polling really mean? India gets a lot of credit for being the world’s largest, in terms of population, democracy.  In spite of all the chaos, it is a great, functioning democracy.

And yet all around us we saw that citizens, people like me and Shweta, were completely isolated from the dance of democracy apart from that single, once in five years act of voting.

I start working very early. In fact the first thing I do when I wake up, which is at about 6 :00- 6:30 AM, is switch on my laptop. I do this before I do anything and with barely opened eyes. My mind is at its freshest then and I get a surprising amount of good work done. I work constantly until about 11:00 AM, with a short breakfast in between. Then I go out for a bit and meet people. I have been trying to squeeze in about an hour of sleep in the afternoon. I feel that I need it. After this, I work until about 6:00 PM, after which I try to plan the evening. I work a lot from home and try to go to the office as infrequently as possible. Offices don’t work for me. They distract me. I get more done at home. If I go out in the evening, I try to return by 10:00 PM and get in at least 2 more hours of work before I go to sleep. If I stay at home, I read for a couple of hours, work for another hour or two and then take a reading break again. From the day I left TV, I have not watched any sort of television and I find that I do not miss it at all. I work at least until midnight on most days. I have almost stopped eating meat because it is too heavy for the kind of work that I do and sticking to vegetables and fish keeps me more awake.

I sleep a lot on them. I try to see if I am dreaming about them. If I am, then I know I am on the right track.

My last few days in TV were fraught with heavily politicised crisis fighting. I learned that it is not always wise to let those who are stupid know that they are stupid. The rage of the incompetent is vicious – this is a Rand cliché – but is so true. Sometimes, false politeness serves the purpose.

Start earlier. I sometimes feel I wasted a lot of time. I could have started a few years earlier.

Online grocery stores in India. It’s an idea dying to be done. The USP of small mom and pop shops in India is that they deliver small quantities locally. They are all in the neighbourhood. If you bring this entire transaction online, there would be millions of them every minute. It would be the biggest thing ever, much bigger than any other net business in India, perhaps as big as Facebook itself. It would have hundreds of millions of customers.

100 Poems by Faiz Ahmed Faiz, the crisp power of his words has a savage and lethargy-shattering rhythm.

Zeb and Haniya, one of the best contemporary bands from Pakistan. They have a really original sound and Zeb Bangash has one of the best voices I have heard. My favourite is Zeb Bangash singing Paimona which is in Dari and Pashto, languages of the Afghan hills. Surreal. Also, Tityo singing Longing for Lullabies, but I don’t like the usual version with the beats. I listen to the version she sang slowly and really soulfully for the Monocle Radio Winter Series last year. Then there is Adele whose Someone Like You is a favourite. And I am now listening, slowly and savouringly, to the incredible Guardian series. It is a guided tour through Beethoven by the legendary pianist Andras Schiff.

If you weren’t working on Whypoll Trust, what would you be doing?

I would have been a surgeon or an English teacher – medicine and a love of language have often gone hand in hand.

Richard Dawkins because he does not believe in god.The Dalai Lama for the same reason.Yet, both of them teach me more about spirituality every single day.

Can the third one be an institution and not a person? If yes, Longform.org, perhaps the best aggregator of long format journalism on the Internet. It has some of the most insightful things I have read.

If not, the writer Alexander McCall Smith for the sheer joy of simplicity and the vision of a calm life.

When I heard my niece, who is all of 2, was in a peacock costume for a school play and was refusing to take it off after a practice session. Hilarious!

It is difficult to choose one. I think it has been a combination of many people – John Galt in the Ayn Rand books for being an outlier, Beethoven for perseverance, Swami Vivekananda for resoluteness and clarity of philosophy, Bill Gates for having the courage to give it all away, Steve Jobs for the lesson ‘don’t settle’ and Prannoy and Radhika Roy of NDTV in India for showing what true man–woman love and inspiration are all about.

What is your prime motivation?

Giving to those who do not have.

What is love to you?

Finding the soul’s reflection of a destiny of holistic empathy in another; realizing that someone else really understands.