How We Raised $100k on Kickstarter In 3 Weeks 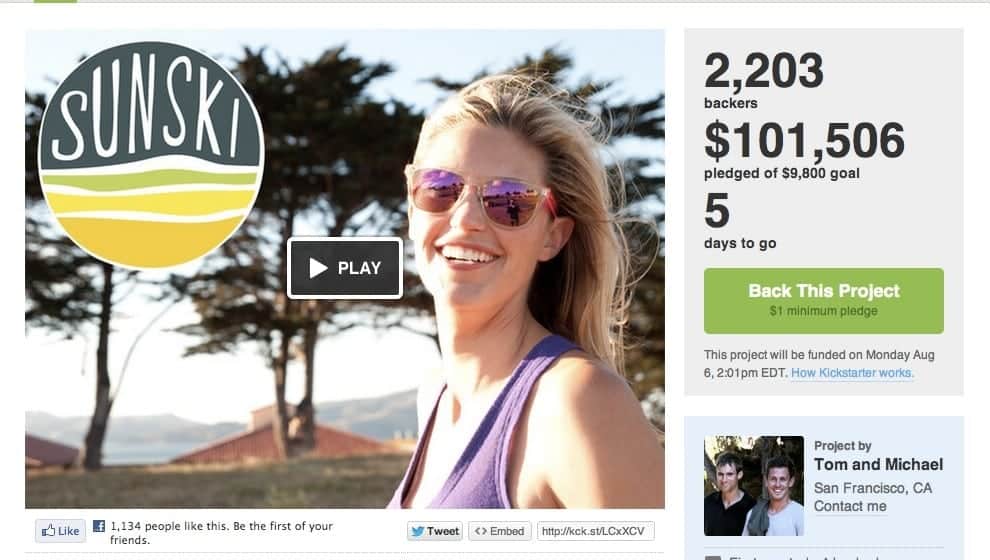 [box type=”alert” icon=”none”]Hey IdeaMensch!  My name is Tom Stewart and I’m a product designer based in San Francisco, CA.  Two years ago just after I started my business, Mario interviewed me for IdeaMensch.  He was kind enough to let me write a guest post for everyone today, so I’d like share an incredible experience I’m having right now with Kickstarter. [/box]

Kickstarter is the leading website for crowdfunding, an increasingly popular method to raise capital for creative projects and small businesses.  In a nutshell, crowdfunding allows creators to raise small amounts of money from a large number of people, usually in return for a good or service provided by the creator to its supporters at the end of the project.

Earlier this month, I launched a project on Kickstarter with the goal of raising $9,800 to update and remake vintage Australian sunglasses called “Sunskis”.  I felt Kickstarter was an ideal way to test market interest in the product while also creating an opportunity to raise the money to get it started.  In less than three weeks, the project has raised over $100,000 from 2200+ individuals from all over the world.  We still have one week left before the campaign ends, and the support keeps coming.  If you’d like to check it out, you can find everything at www.sunskis.com.

There’s no exact formula to Kickstarter success—and I’ll be the first to tell you that fortune was definitely on our side.  That being said, here’s what we focused on:

It’s no secret that that a strong video is essential: it is by far the most effective way to connect with your backers on a creative and personal level.  Making a video from scratch, however, is a daunting task.  Here are the pointers we followed:

The most successful products on Kickstarter offer clear, easily understandable rewards that usually involve receiving a physical thing in the mail from the creator.

Kickstarter does a good job about explaining all of this, but projects still suffer from nebulous rewards and the results are almost always lackluster.

Kickstarter is a popularity contest just like anything else on the internet, and most projects don’t reach funding.  The effort you make to share your project is almost more important than the project itself.  In order to get more eyes on your project and give it a chance for real success, you need a big start so it climbs the ranks of popularity and gets seen by the Kickstarter community at large.

Interact with your Backers

Once you do start getting support for your campaign, people will send you messages and post on the comment board for your project.  Keep these people engaged!

There’s a ton of wisdom out there on how to run a successful Kickstarter campaign, and there’s definitely plenty I’ve missed.  Above all, the writing is on the wall: crowdfunding is becoming a legitimate way to get your business or creative project off the ground, and there’s both an art and science to the process just like with anything else.  For me, the most exciting part is that for any great project that reasonably fits inside the Kickstarter model, there is an attainable path out there towards reaching your funding goal.  If you’re on the precipice of releasing a new idea to the world, crowdfunding should be on your list of early funding options.  It forces you to flesh out a brand ethos and marketing aesthetic long before you’d have to with other traditional funding methods and it does so through a low/zero risk platform.  Definitely worth checking out.