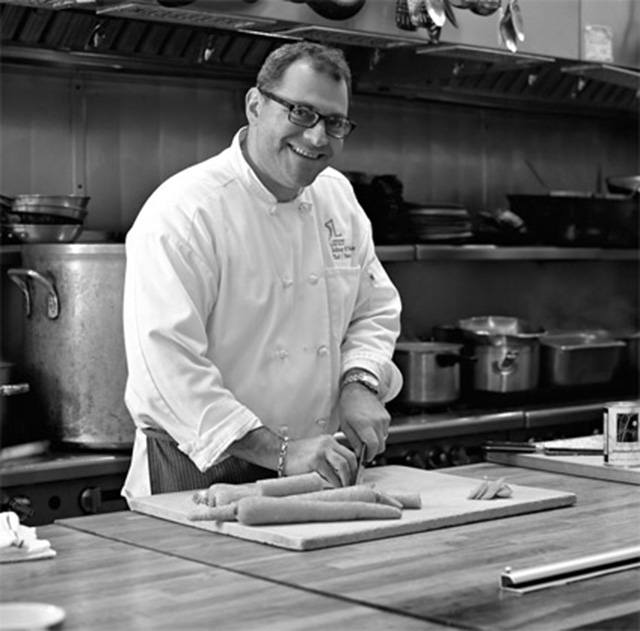 [quote style=”boxed”]I continually check in on the state of my management team and employees to ensure that they feel happy, vital and productive. Your people are your greatest assets.[/quote]

Jeffrey P. Fournier grew up in an untraditional culinary environment. In his French-Armenian home, delicacies such as raw lamb kibee were a regular part of his grandmother’s menu. For Fournier, this exposure to eccentric dishes resulted in a fascination for the kitchen, a space that he often chose over the playground.

In 1991, at the age of 23, Fournier left his native Amesbury, Massachusetts, and headed to California to explore the culinary world on the West Coast. His first job was as a line cook at the renowned Rockenwagner in Santa Monica, where Chef Hans Rockenwagner taught Fournier Austrian-Californian cuisine. Just two years later, he earned the position as sous chef at Café Montana, also in Santa Monica. At this Italian-Californian restaurant, Fournier broke from the norm with such popular creations as fried linguini with wild flowers and carrot pesto, and roasted lamb with fried basil..

In 1996, Fournier moved back to the Boston area and found himself at the upscale Pignoli under Chef Daniel Baliani. There he learned the fundamentals of Baliani’s contemporary fare as well as “Marco Polo” cuisine, which is influenced by the countries once traveled by the explorer, including China, India, and East Africa. When Fournier left Pignoli he joined the team at the Linwood Grill. A few years later, the critically acclaimed Chef Lydia Shire wooed Fournier away from the Linwood Grill and into the position of sous chef at the famous 125-year-old Locke-Ober kitchen. Fournier then moved to Shire’s well-regarded Excelsior.

Whenever Fournier got the opportunity to create his own addition to the menu in any of the restaurants in which he has worked, his creations always wound up with some Latin influence. Whether it originated from befriending kitchen staff from Colombia or the Mexican cuisine he sampled when living in California, Fournier’s signature culinary style is truly Latin inspired.

This evolution led Fournier to the executive chef position at Sophia’s, a Latin restaurant and club located in Boston’s Fenway district, where he signed on in 2004. Here, Fournier created a Latin–inspired small-plate menu, which combined food and liquor pairings.. Signature dishes included shrimp and calamari tacos, handmade hibiscus liquor with bresaola, and tuna ceviche..

In 2005, Fournier became executive chef at The Metropolitan Club, which he felt was the ideal place to further exhibit his talent and run wild with his imagination by putting a twist on a traditional steakhouse. . Fournier’s signature dish – watermelon steak – is just one of the many examples of the carefully chosen blend of ingredients he created at The Metropolitan Club.

The best part of Fournier’s creativity is that is does not stop in the kitchen. In late 2006, when an opportunity arose for a new space where he could blend his creativity for art and food, Fournier could not resist. Thus, 51 Lincoln was born, and. During its first five years of existence, 51 Lincoln has won numerous awards, including Boston Magazine’s coveted “Best of Boston” award three years in a row as well as Improper Bostonian’s Top 50 restaurants in the city..

Fournier’s dishes have appeared in national publications, numerous online outlets, and blogs. Both industry professionals and regular guests can attest to the level of quality, attention to detail, creativity, and passion that go into every dish. And 51 Lincoln prides itself on superior hospitality that is second to none.. 51 Lincoln is fully booked almost every night, and business continues to grow. In fact, the restaurant had its best year yet in 2011.All of this success fuels Fournier’s creativity, hard work, and focus as he continues to lead the kitchen at 51 Lincoln. He still dedicates himself to his art and helps shape the future of the culinary world as a guest instructor at Boston University’s culinary program. Fournier also works as a consultant, helping others in the hospitality industry achieve their dreams.

As Fournier says, “Every day is a new day at the restaurant. Regardless of how great we may have been the night before, we start over the next day.” It’s an ethos that elevates his staff to a level of excellence, which is above and beyond the standard small suburban restaurant.

Besides juggling two restaurants and consulting for a third, I’m focusing on my book “51 Lincoln Rule book – Chef’s stories of creation of his first restaurant.”

Where did the idea for 51 Lincoln come from?

51 Lincoln has been around for almost 6 years now, and we’ll always follow the same principles that we built 51 Lincoln on, which is the combination of creativity, hospitality and craft. It’s meant to be my source of culinary inspirations, as well as a gallery of my paintings.

My schedule very much varies on a daily basis. For example, someday I may be cooking a special tasting; other time I could be out at an event promoting sustainable food sourcing, but overall I try to spend as much as possible at my restaurants with my staff.
9AM: checking in the financial numbers from the previous night
9:30AM – 10AM yoga in the house
Phone calls, miscellaneous work in the office until 11:15am
Afternoon: Head to 51 Lincoln or Waban Kitchen for meetings, kitchen prep or managing operations
4:15PM staff meeting at one restaurant, where we discuss the menu,
5 – 9:30 manage service and interact with guests
9:30 – 10:30, work on various projects and prepare for the next day, assess sales of the evening
10:30 to 12:30 reply emails and work on book project

Use our collaborative management process, which includes presenting an idea and evaluating it, communicating the logistics and finally, execution. Everyone on the team is always highly involved in each project.

At no time in human history, people were more interested in understanding the food they eat.

I once worked as a clerk in a bookstore in California, where the employees had zero input in operations. I felt like I was wasting my life away. What I learned, naturally, now that I’m running my own businesses is that every employee needs to be empowered and know that he has an impact on making the business better.

I would have traveled and worked in restaurants in Europe when I was younger. The experience would give me a different sense of place, food and hospitality. Europeans have such a long tradition of high standards in food and service.

I continually check in on the state of my management team and employees to ensure that they feel happy, vital and productive. Your people are your greatest assets.

My catering company. Five years ago, I run an unsuccessful catering company for 8 months and ended up selling it. The biggest mistake I made was picking the wrong partners. You need the right people involved in the right project.

I always loved the idea of a noodle bar, featuring a tight menu of noodle dishes from different countries in Asia and a large selection of beers from the world.

I wish individuals would be more responsible for their actions and have greater level of integrity and authenticity. How would I do that? Electric shock treatment. No just kidding. I think in general, people just aren’t held accountable enough.

For an entrepreneur, ego is enemy.

I love apps and tools that centralize all my resources. So Google apps and Dropbox are something I use daily. As a restaurateur, I check into OpenTable often. The site really gives you a lot of data and insights into your business and customers.

The Power of Habit by Charles Duhigg. I read it earlier this year and highly recommended it to everyone that I work with. The central idea of the book is that human beings are very habitual and our lives are run by a series of small routines which are triggered by a cue and end with a reward. Business organism works the same way. And as business owners, your goal is to identify the habit loop and encourage positive habits.

Jose Andres – Jose is extremely active on Twitter and it’s really amazing to see his interaction with a wide range of people. It really shows the power of social media.
Danny Meyer – you can’t be in the business and not follow Danny Meyer
Seth Rosen at Custom Made – a great friend of mine and an entrepreneur that always inspires me