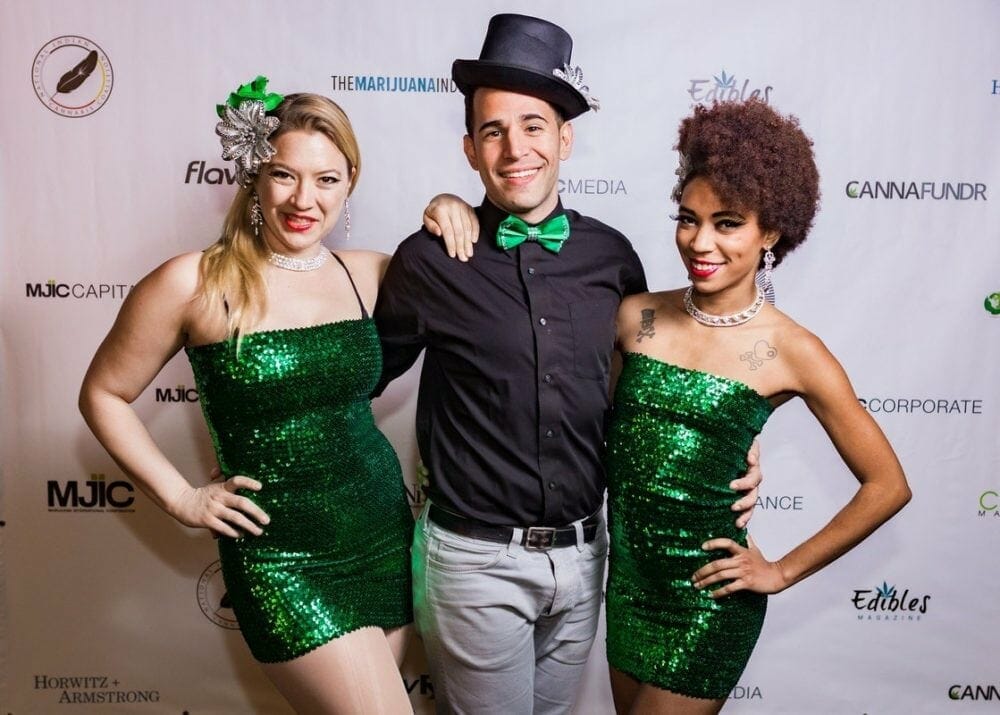 Kat Thomas is CEO of This Way Adventures, a creative media company focusing on symbology, sensuality, and spirituality. She, along with producing partner Julia Reed Nichols, is the Co-Creator of The Green Light District, a speakeasy cannabis cabaret show that has toured through the recreational states of this country including Oregon, Washington, California, and Nevada. The GLD was the featured entertainment at the World of Cannabis Summit at the Palms Casino, Las Vegas, NV, Angel City Brewery in Los Angeles, the Lagunitas Community Room in Portland, OR, High Dive in Seattle, WA, American Legion Post 134 in Portland, OR and Dope Dining’s Cannabis Cup Kickoff Carnival in Las Vegas, NV.

Miss Thomas is the Co-Creator (with her nationally ranked Poet sister Kelly Grace Thomas) of the On-Demand Typewritten Poetry brand: The Zelda Fitzgeralds. As a wordsmith Kat has written SFUMATO, an existential vampire novel, MAGIC LITTLE PILLS, a comedy screenplay set in a pyramid scheme, and UNFORESEEN CIRCUMSTANCES, a screwball comedy screenplay set on the world’s longest international flight. As a Reporter her articles have been published in Civilized, Edible Skinny, AMA Feed, Verge Magazine, the Santa Monica Observer, Whole Life Times, and The Argonaut. As an artist, Miss Thomas in the owner of the rhinestone business BlingOSaurus. She is the illustrator and writer of the internationally selling grown-ups coloring book guide to the world of stripping: THE HAPPIEST STRIPPER.

As a performer Kat has entertained audiences in 29 states including the Sundance Film Festival, the Beverly Hills Hilton, the El Cid in Los Angeles, The World Famous Magic Castle in Hollywood, LA Fashion Week, Dantes in Portland, The Hustler Club in Las Vegas, The Legends Room in Las Vegas, and the clubs of Bourbon Street in New Orleans. Her work has been featured in media such as: BravoTV E Online, The Huffington Post, Idiotest, The Daily Mail, LA Weekly, Thrillist, Buzzfeed, Wifey.tv, We Are Mighty, Time Warner Cable, & local ABC & NBC affiliates.

Where did the idea for The Green Light District come from?

My producing partner, Julia Reed Nichols, and I produce a lot of events through her company Do Right Industries! A few years ago, we began exploring the cannabis space because we felt that events in this space were mostly one note. Don’t get me wrong, I LOVE Snoop Dogg as much as the next person (D-O-Double-G!). But, we felt that he doesn’t have to be the only game in town. 😉
Sometimes you just want to get high, relax, and listen to something more in the vein of Frank Sinatra, Billie Holiday, or Bobby Darin. The largest growing market of cannabis users is fifty and above. We felt there was a lack of cannabis entertainment catering to this demographic. The GLD is the bridge between these two worlds: Ella Fitzgerald styles covering Snoop like songs.

There is no typical day, which is why I LOVE being an entrepreneur! I could be planning a tour, finding partnerships, planning our next album, interviewing Movers & Bakers in the cannabis industry, redoing our marketing materials. Everyday is an Adventure!

Through having a consistent vision! Our 420 Tour through Portland and Seattle was the first time there were certain elements in our shows that Julia and I were talking about two years ago. Now that’s a long time between when we thought about the concept, and when we saw it on a stage. As they say, the difference between super successful people and others is depth of vision and time.

Social Use! I consult on upcoming Social Use project and it’s AWESOME to think that someday you’ll be able to go to a cannabis lounge, have an infused drink, and listen to some kickass music played by The GLD band.

Being willing to try new things. “Failure” is AWESOME because it gets you closer to hacking the system and figuring out how something works. Edison said he didn’t fail 10,000 times, he showed 10,000 ways not to make a lightbulb.
And let’s be serious, there’s really no failure when you play the game for the long term, it’s only when you play the game short term you think you failed.

Try More! There was a point in my life when I wasn’t such an Adventurer, when I was terrified about what other people would think. Fear of social shaming talks many a person out of their dreams. It wasn’t until the ugly face of regret started to creep into my life that I started to allow myself to be more of a CREATOR.
One of my favorite projects of my lifetime so far was when I drew my cat Peppermint for a year. When I was a kid I always said I was any artist, but somewhere along the way I lost that. Seven years ago I started an art project where I drew Peppermint everyday for a year and put it on a blog. The first month I agonized over every drawing, and then this FREEDOM arrived where I just didn’t care. By the end of the project I was loving every picture regardless of what it looked like because I created it at a particular moment in time. It reminded me that the Woody Allen quote is ultimately true: 90% of life is just showing up!

Einstein said, “There are only two ways to live your life: as though nothing is a miracle, or as though EVERYTHING is a miracle.” People are welcome to their own opinion (the fact that we’re all different is what’s AWESOME about the human race!), but I feel my life IS MAGICAL because I believe in MAGIC!

Writing things down. Everyone’s so prone to type everything on a phone or computer, but you use so more of your brain when you actually pick up a pen and paper and write things down.

Earlier I used the word failure, but in truth I don’t believe failure actually exists. Failure is a short term game concept; when you stop living for short term results then nothing is a failure. The thing about the cannabis industry is we’re all still trying to figure out the rules (on both the State level and the Federal level. I’ve had many projects in this industry get shelved because we’re talking two steps forward towards Social Use, one step back. But those are there for everyone to get clearer on what our vision of the cannabis and cannabis entertainment is. Everything in life is either a wall or a hurdle, the choice is yours!

Create more content! Every brand I have helped create, from The Green Light District to The Zelda Fitzgeralds, involved lots and lots of content creation. I work in creative industry, but people still need to be convinced to write a check to you. Content is the quickest way for them to align with the vision in your head and hand you over the money!

I just bought, $100 motorized gimbal for my iPhone (a stabilizer for shooting video). For our 420 Tour we didn’t have the budget for a videographer to travel with us, so I shot the whole tour on my iPhone. That content has already gotten us multiple leads!

I’m a big fan of Google Docs and Sheets. I have a tendency to jump between a MAC and PC so having the ability to work on words and numbers and not be worried about compatibility is AWESOME. Plus their Phone Apps for these programs are top notch. I can input my tour costs while on tour, allowing more productivity when back in the office.

“Think and Grow Rich” by Napoleon Hill. Everything in life is won or lost in the head. Get your inner game right and you can conquer the world!

“Most folks are about as happy as they make up their minds to be.” Abraham Lincoln