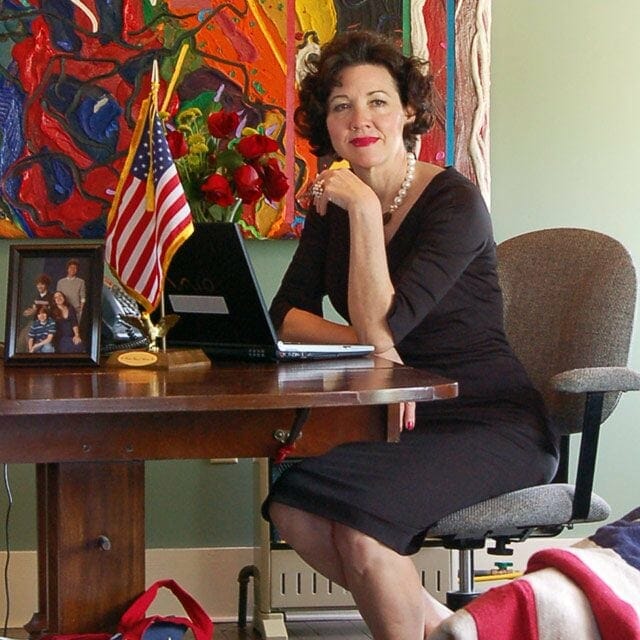 [quote style=”boxed”]Even the things I did not do well, I learned a lot from.[/quote]

Originally from North Little Rock, Ark., Kerry McCoy moved to Dallas after high school, where she attended Miss Wades Fashion Merchandizing School. She graduated during the 1974 recession and began working as a Betsy Ross Flag Girl when she could not find a job in her field.

After a trip home to North Little Rock, Kerry, somewhat discouraged by her situation in Dallas, checked the Yellow Pages to see how well flag businesses were represented in Little Rock. “Nobody did it here,” she said.

Determined to make a go of it, Kerry returned to Dallas long enough to quit her job. She returned to North Little Rock with $400, which she spent on a business permit, business cards (designed sitting on her mother’s living room floor) and order sheets. Kerry says that she spent many of the early days distributing her cards to Central Arkansas businesses.

Over the last 39 years, Arkansas Flag and Banner has grown from door-to-door sales to telephone sales, catalog sales, a retail store front, and online sales. Today, in addition to telephone, catalog, and a retail showroom, the online store carries more than 22,000 products. Kerry has come a long way from $400 and self-designed business cards.

Kerry is often called upon by local organizations to speak about her American success story. Young business students benefit from hearing about her inspirational journey, the experience of starting a business, common mistakes to avoid, and more.

This past year, Kerry was part of a video and television interview and tour of the Flag and Banner facilities by the Small Business Administration as a “prime example” of what the SBA can do to help small businesses. In addition, the Arkansas Capital Corporation featured Arkansas Flag and Banner as one of their success stories in Arkansas Bankers Association magazine.

In 2013, Kerry will have a film crew from AETN documenting her work with Friends of Dreamland Ballroom, the nonprofit she started to rescue and restore the historic Ballroom on the third floor of the Taborian Hall, home of Arkansas Flag and Banner.

Keeping up with Google changes. I launched my first website in 1995 and haven’t been able to rest since. E-commerce is so exciting, ever changing, and still in its infancy. I feel like it is a hole where all my money goes. But you have to have it for today’s business.

Where did the idea for Arkansas’ FlagandBanner.com come from?

From a series of bad luck. You have heard that necessity is the mother of invention. Well for me that was true. I need a job and the only job I could find was selling flags in Dallas, Texas. Eventually I moved home to Little Rock, Arkansas where I began Arkansas Flag and Banner and began to sell flags door to door for myelf. We later morphed into Arkansas’ FlagandBanner.com

We are retailers. We sell and distribute the most American product of all, the US flag. In the beginning we sold mostly business to business US, State, and Foreign Flags and Flagpoles. But since 9-11 the country has begun to show their patriotism in other ways. So now we a gift store offering a wide range of patriotic gifts, apparel, jewelry, and home décor.

We open 8 – 5:30 Monday- Friday and Saturdays 10-4. I worked in and developed every department at AFB so I understand the business through and through. Today I do not work in each business department but more on the business. Improving processes, enforcing procedures, and managing personnel.

I call it the Dog With A Bone syndrome. Usually I have the idea in the evening. If it still sounds good in the morning, I will tell someone at work to see what they think. I do my best thinking when I talk out loud. If we can’t think of a reason not to pursue the new idea then we start. We work on the idea until fruition or until we reach a brick wall. We never just quit on something willy nilly.

I really dig e-commerce. It is exhausting but also very exciting. There are lots of variables and lots of potential. I get bored doing the same thing every day.

I started Arkansas Flag and Banner when I was 20, so my work experience before that was mostly waitressing and other part time jobs. I can say probably the hardest thing to learn in my business is hiring and firing. I take this part of my job very seriously. The decisions I make on a micro level affect families and our country.

Nothing. Even the things I did not do well, I learned a lot from.

Use the correct words. Communication is hard so when working and talking about a project I try to get everyone not say “it” and “thing” and “them”. But rather to use the proper descriptive noun so everyone doesn’t have to guess “what thing” you are talking about.

Wanting to be friends with my employees. I overcame it with age. Young people naturally want friends, older people want peace. Peace comes from having a well working business and that doesn’t always lend itself to friendships.

I raise chickens and have for 10 years. It takes very little time and space. If I was a stay at home Mom I would sell my eggs to the local breakfast eatry. Check out your city health codes but most places will allow you to sell a certain amount of eggs without much paper work. Eggs are the perfect food. They can sit in the heat for days because they are air tight and have a natural bacteria that repels bugs. Know how to tell if an egg is fresh? Put it in water. A fresh egg sinks to the bottom. A not so fresh egg bobbles a little. And a rotten egg floats, meaning there is air inside.

I would love for our country leaders to care more about our country than their personal success and egos, but I have no idea how to fix that so I will pick something small where I really can effect change. I would like for everyone to eat healthy. Just whole, real foods, no food coloring and artificial sweetener or flavoring. If I had time and extra money in my day, I would like to cook To-Go dinners for my employees when they leave work. I think most people make eating healthy too hard. It is easy and I think I could retrain many people’s eating habits through examples.

Nobody ever believes this but I used to be terrified of speaking in front of people and on camera. I knew to be successful I needed to push through that fear. I have spent many a sleepless night fretting over the next days speech.

Of course email. And I look at Google Adwords and Analytics every day. My employees also use Drop Box for sharing documents. And I have some interoffice sales and phone reports that I review daily.

My kids made me read and reread Siddhartha. It was good for me because the main character preaches, listening, thinking, and then acting. I kind of live my life in reverse. But I am working on it.

Ellen Degeneres because she is funny, Anthony Weiner (for obvious reasons), and Hillary Clinton. Does Bill tweet?

Today when my girlfriend dropped by. Everything she does makes me laugh.

That is kind of a moving target. I watch lots of documentaries and get inspired by many different people. I recently watched one on Bill Gates and he has really mellowed and become like the worlds # 1 citizen. I don’t agree with some of his Monsanto dealing but he is doing some great things for our planet. I wish I had his brain.

Dah. Finding the right person you can trust and has the same vision is the trick. When the time is right I am sure it will present itself.

Will I ever retire?

I think about it sometimes but I am not sure what I would do. I like problem solving for business. Maybe I could work less. I would like to have less stress and more time to try something new.