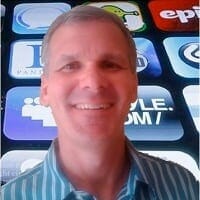 Mark Stetler is a serial entrepreneur. He graduated from Baylor University with a degree in finance and then from the University of Texas School of Law. He practiced law for 11 years before founding a wholesale mortgage bank for a large financial services company. He has owned a promotional products company and before his current venture iPhoneAppQuotes.com and related businesses, he co-owned NIA Consulting, the nation’s foremost firm specializing in forensic financial analysis. When Mark joined NIA in 2002, it had two employees. When he left at the end of 2008, it had 150 employees and revenue 66 times greater than when he started. Mark was instrumental in arranging for the sale of NIA to Verisk (NASD: VRSK) in 2007. He purchased iPhoneAppQuotes in July 2010, and is actively expanding the business into the iPad, Android and BlackBerry markets and is exporting the business model internationally into the UK and Australia.

Our single goal in the next six to 12 months is to help the market understand our value proposition.

Our business model is irresistible to the business and entrepreneur client who uses us. After a five or ten minute discussion, we refer the client to three of the best U.S.-based app developers to be found. The client pays nothing for the service, and the developers compete for the business of developing the app. For the developer, our value proposition is excellent. Our marketing and search rankings create excellent traffic of clients who need app development help. We pre-screen potential clients to assure they understand the complexity of the development process, they have an idea of how much money they need, and they are willing to start within 30 to 60 days. Since we weed out more than half of the projects we review, the developer sees significantly fewer “tire kickers” than he would otherwise — reducing wasted sales time. For the service, the developer pays a nominal fee per referred project. Excellent developers close between 20 and 30 percent of the projects they see from us, and many of those closed projects lead to multi-project relationships with the client, for which the developer pays us nothing.

Worldwide, Apple sells about 6.5 million smart mobile devices, iPhones, iPads and iTouches per month. According to Google, 200,000 Android devices are being activated every day. That’s double the number of Android devices that were being activated each day just two months ago. For comparison, the United States has about 300 million people. China has more than 300 million mobile phone users, and that number is rising at an increasing rate.

In the U.S., according to the Wireless Association, more than 270 million people have cell phones. By the end of 2011, every other cell phone (more than 150 million of them) in the U.S. will be a smartphone capable of running multiple apps.

Mobile devices and the accompanying software (apps) will over the next five years, change the way in which we work, play and interact with one another, perhaps as much as the Internet changed the world 15 years ago.

[quote]I have never been particularly lucky and there are many, many people who are smarter than me. If I have an advantage it’s business, it is that I have a vision of where I want to take a business and the single-minded determination to see that vision become a reality.[/quote]

So, my method for bringing ideas to life is to imagine what the future of my business can be, and work every day to see that vision become a reality. For the entrepreneur, I know of no more important attribute than single-minded determination to realize a vision for a business.

I spent too much time doing something for which I had no passion. I went to law school to become a real estate lawyer so that I could become a real estate developer. By the late 80s in Texas when I should have “jumped off” into real estate, there was no real estate development going on. I had a good job with a great law firm, and I stuck with it, not because I had a passion for law, but because it was comfortable. I didn’t leave the law practice for eight more years. While I have no regrets, I wonder what I could have accomplished as an entrepreneur in the eight years I was doing something I did not enjoy.

I am almost always “connected,” and while it may seem trite, I could not do my business and maintain my lifestyle without my MacBook and a modem, for times when WiFi is not available.

In perhaps the most succinct business advice every given, Mr. McGuire famously said to Dustin Hoffman’s character, “just one word … plastics.” (“The Graduate” 1967) To paraphrase, the one word for the market today is “apps.”

For the moment, disregard iPhone and iPad games, which are prolific, but I’ll argue not society-altering. Apps are changing the way in which a business communicates with its customers and employees. They are changing the nature of advertising (not Google’s recent purchase of AdMob). They are changing politics (no legitimate candidate for state-wide or national election will soon be without an app), personal relationships (soon, you’ll be able to down load the eHarmony app, and hundreds of apps connect with Facebook and Twitter), and education (there will soon be thousands of interactive books for iPad and soon enough students will carry their iPad textbook to class, take iPad-based tests and receive instructor feedback on their iPad).

If you are a business and you are not figuring out how to harness the power of mobile computing for your customers, clients, patients, vendors, employees, contractors, etc., you are falling behind. Use iPhoneAppQuotes.com or don’t, but create a concept and have it built.

What motivates entrepreneurs in general, and you in particular, to succeed and to build a business that serves the needs of its customers?

The conventional wisdom is that entrepreneurs are motivated by greed. For most of us, that is simply not true. It is a combination of fear and satisfaction that motivates me, and I think, most other entrepreneurs … fear of failing, fear of proving unworthy of a task or goal, fear of not having sufficient determination to accomplish a task. Also there is a satisfaction of knowing that, whether by luck or skill or sheer will, you accomplish something that is difficult and that not everyone could do or would even attempt.

What is the key to success in life?

It’s all about relationships. If you to think of a person who has good relationships with his spouse, children and extended family, with his friends and with his work colleagues, it is very likely that person is happy and prosperous. Perhaps he is materially successful, perhaps not (especially these days). But the things in life that most often make us happy are those things that relate to good relationships with other people.