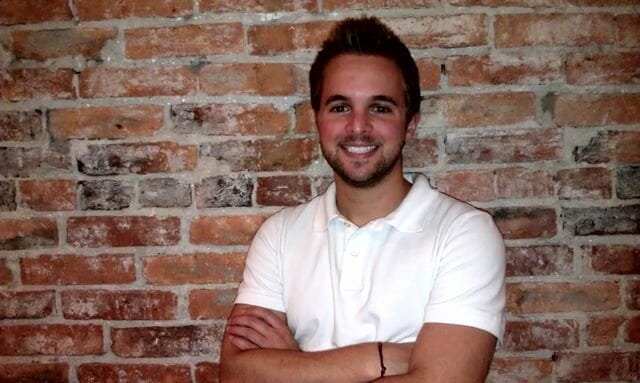 [quote style=”boxed”]I would have started earlier. It’s really time consuming to try to create a startup while working full-time. I wish I could have taken some time off right after college and fall back on a job if things didn’t work out.[/quote]

Matt Rutter, a Massachusetts native, is just beginning to hit his entrepreneurial stride. Anyone that’s ever met him knows he’s a ball of energy that loves making sure you’re having as good a time as he is. This is suiting though since he’s the Co-founder of GrapeVibe, an online event-based network that makes it easier to discover, plan, and relive the experiences that shape your life launching later this year. They believe there are a ton of amazing things happening around us every day, but because we have no way to hear about them all we end up missing out. GrapeVibe will store all of your cherished life experiences in one place for you to reminisce about the good times. You can sign up for their launch at GrapeVibe.com.

In addition to starting GrapeVibe after hours, by day Matt is an organized and motivated sales professional working at a marketing and public relations software company helping companies improve their communications strategies. Matt graduated from Ithaca College with a degree in Business Administration concentrating in Marketing and a minor in Legal Studies.

Right now we are pushing hard to launch GrapeVibe. We recently just finished integration with a service that will provide us with what we’re calling “Official Events” that have been verified as legitimate so it will be easier for users to find more relevant experiences and even purchase tickets where necessary. We still have a whole lot of work to go from a development standpoint, but the recent progress we have made has been amazing. Things are really coming together nicely.

Where did the idea for GrapeVibe come from?

My friend JW and I were planning a trip with 12 of our friends to go to Cape Cod for the 4th of July. With that many people the whole process was a bit of a headache. Between figuring out who was going, having over 100 emails and a few Google Docs, a few chance run ins with other friends we wish we knew were there, and three Facebook albums later we knew there had to be a better way to do this. We began talking and eventually looped in my friend Shaun from college and began to develop GrapeVibe as you’ll see it later this year.

My day is really scheduled for the most part. Wake up at 7:00 and hit my snooze button. Finally get up at 7:10 and get ready to go to work. After work it’s a varied mix of anything like happy hour, exercising, GrapeVibe video calls, cooking dinner, catching up on any TV shows..

It’s kind of a two fold process. First, there’s something about talking to myself until I can get my ideas down on paper or in an email that works well. I think it’s because my brain is always moving at 60mph and this gives me the ability to work through the idea fully so that by the time I got to write it down I have a much more clear picture. Second, is talking my idea over with someone to see if I am crazy or actually on to something. They might even open my eyes up to a whole other way of approaching it than I initially thought..

I wouldn’t say that it excites me, but services like Birchbox.com, 12Society.com, or FrankAndOak.com are really interesting because each month they send people new product samples or hand picked products in the hopes that consumers will like them enough to purchase them.

When I started high school my parents made me get a job at the local supermarket bagging groceries. It was a grind spending at least four hours on your feet let alone pushing people’s groceries from the store to their car. What it did taught me at an early age was the basics of financial responsibility and managing the money I earned.

I would have started earlier. It’s really time consuming to try to create a startup while working full-time. I wish I could have taken some time off right after college and fall back on a job if things didn’t work out.

Don’t be afraid to ask. You don’t know what you don’t know, and it may save you a lot of time and effort by simply just asking someone.

Fortunately we haven’t run into failure yet. Hopefully that doesn’t jinx us. We have ran into a few challenges throughout development, but we have always been able to find another approach that has ended up working better than what we were initially planning.

An app that turns photos into a comic strip.

I’m not even joking, but why hasn’t someone invented teleporting? If I didn’t have to ride in a car or sit in traffic ever again that would be incredible.

I’m colorblind and tone deaf. My senses are all out of whack.

Google. Literally everything about it. I use their Search for everything even when I don’t know exactly what I’m looking for. Without putting stuff in my Calendar I would lose my mind. Drive from a collaboration standpoint is a great way to share documents and work on things in separate locations. Reader is how I stay on top of all my blogs regularly. Books is probably a hidden gem where you can keep track of your reading lists. It goes on and on and on…

LinkedIn. Being able to make meaningful business connections and keeping track of them over time is a hugely powerful resource that might come in handy down the line.

Spotify. How I was so late to this bandwagon I have no idea, but I am constantly listening to music and finding great new artists I should be listening to.

The Millionaire Next Door by William D. Danko and Thomas J. Stanley is a great book where they researched the habits of millionaires and share their strategies with you to use on your own.

@mcuban he’s a great example of entrepreneurial success and because Shark Tank is awesome.
@mashstartups provides a ton of great news and information about startups.
@uberfacts because the amount of random knowledge they collect is amazing.

I laugh at everything so this is tough. Earlier today I saw a GIF from an episode of Louie from a week back when he dances:

This is a very cliché answer, but my dad. He taught me what I need to know about responsibility and setting realistic goals. He was able to retire at a fairly early age and I hope to follow in his footsteps.

“You’re too young to be tired.”

What are the top three concerts you’ve been to?