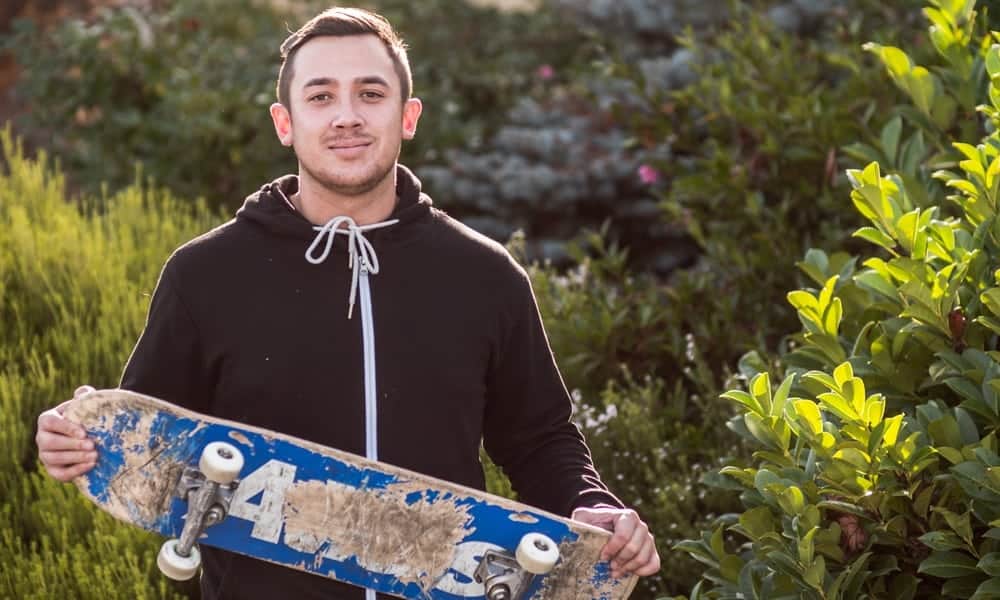 I am more of a visual thinker. Before an idea, I love to draw it out on my big white board step by step.

Michael Roloff is the Chief Executive Officer of Rental Pal. As a former amateur skateboarder and young entrepreneur, Roloff is an expert when it comes to sports rental equipment. Roloff spent over 16 years as a skateboarder but his career was cut short due to a knee injury. He is an avid sportsman and has rock climbed, played baseball, football and Jiu Jitsu. Roloff graduated from the College of San Mateo with a Business Administration and a Computer Science degree. He has dedicated time to the sports community by teaching skateboarding lessons. Prior to founding Rental Pal, Roloff was a product manager for an app called Media Monster. He also made rented out snowboards, surfboards and various of my sports equipment on sites such as Craigslist and Facebook. Roloff also had a previous start up called Easy Target Design in which clothing was designed for high school sports teams and clubs and eventually led to being purchased by an art group in Los Angeles, California.

Where did the idea for Rental Pal come from?

I have always had a love for sports and I am a natural born athlete. I was a former amateur skateboarder and spent over 16 years as a professional skateboarder but his career was cut short due to a knee injury. I am an avid sportsman and have rock climbed, played baseball, football and Jiu Jitsu. After my injury, I used to dedicate my time to the sports community by teaching skateboarding lessons, as well as renting out snowboards, surfboards and various of my sports equipment on sites such as Craigslist and Facebook. I also had a previous start up called Easy Target Design in which clothing was designed for high school sports teams and clubs and eventually led to being purchased by an art group in Los Angeles, California.
I started Rental Pal because a lot of people have good quality sports gear laying around that is just collecting dust or it is a seasonal sport and is not getting used. Before starting the company, lots of time was spent working so I could not go snowboarding every weekend. I would rent the equipment to people who did not own boards and I ended up making double of what the snowboard costed. I started doing this with all my sporting equipment even golf clubs and baseball bats. That is when I felt I need to create something that offers people a secure way to make money or borrow sports gear. That is how mobile was born which now allows people to rent sports gear from all categories, along with a B2B service that helps sports gear shops have an online appearance and a way to market their gear to travelers, adventurers and first time sports enthusiasts.

I have a pretty disciplined schedule. A typical day is starting early by going to the gym and then having breakfast and checking in with developers. I typically have an operations briefing, screen new developers and plan for city operations. During lunch I learn a new coding language or play some kind of sport. Later in the day is when I design and work on new iterations of the app, or website and then I meet up with connections to discuss new opportunities or products. My lifeline is my Google calendar.

I am more of a visual thinker. Before an idea, I love to draw it out on my big white board step by step. I also play around with Invision to create wire frames for new products.

The sharing economy is one of my favorites. What Lyft and Airbnb has done is awesome. Not only are the concepts cool, but it also creates jobs for everyone. I also like autonomous vehicles.

Any task, no matter how small it may be, I set reminders for. I also learned to unplug from the company for a certain amount of time during the day to avoid burning out.

The worst job I ever had was working at a big box retailer at age 16. Although it was a mundane job for me, I learned how to wear multiple hats such as cashier, stocking, folding boxes, cleaner etc. This translated into entrepreneurship because when you start a business , you have to wear many hats until your ready to bring on employees.

I would screen developers more thoroughly. I had a few instances where work was not being completed by the deadlines I would set. I ended up doing most of the work during that period to ensure my deadlines were met.

I double check even triple check everything I do regarding Rental Pal. Double check my schedule, locations we need to be etc. One missed meeting or even being late could be your first and last impression.

Social media has helped grow my community. Instagram has been the best as it connects me to the right demographic for me.

Back when a friend and I were making clothing for school sports teams, we decided to ship a box and it ended up at the wrong address. Unfortunately, we had to refund them and they did not have practice long sleeves for the basketball game, they still wanted to work with us because we have excellent customer service and sent them another order ASAP.

This goes back to the concept of rent everything. If you have too much laying around the home and don’t want to maintain those things, put them up for rent to make extra income.

Courses on udemy.com for additional learning. I recently wanted to learn more about UI/UX. Udemy has lot of great courses on there if your willing to put the time to pick up extra skills.

Xero – Accounting: I love this program because the dashboard and interface is so easy to use.
Paypal – This program is integrated into our app to receive payments for your gear easy to implement in mobile app. working creating a secure payments system in future.
Square – Has the ability to receive payment and you can set it up in minutes
Homebase is great to track contractor and employee hours
.

“Before you quit your job” by Robert Kiyosaki. I just read and liked alot. All of his books are good reads.