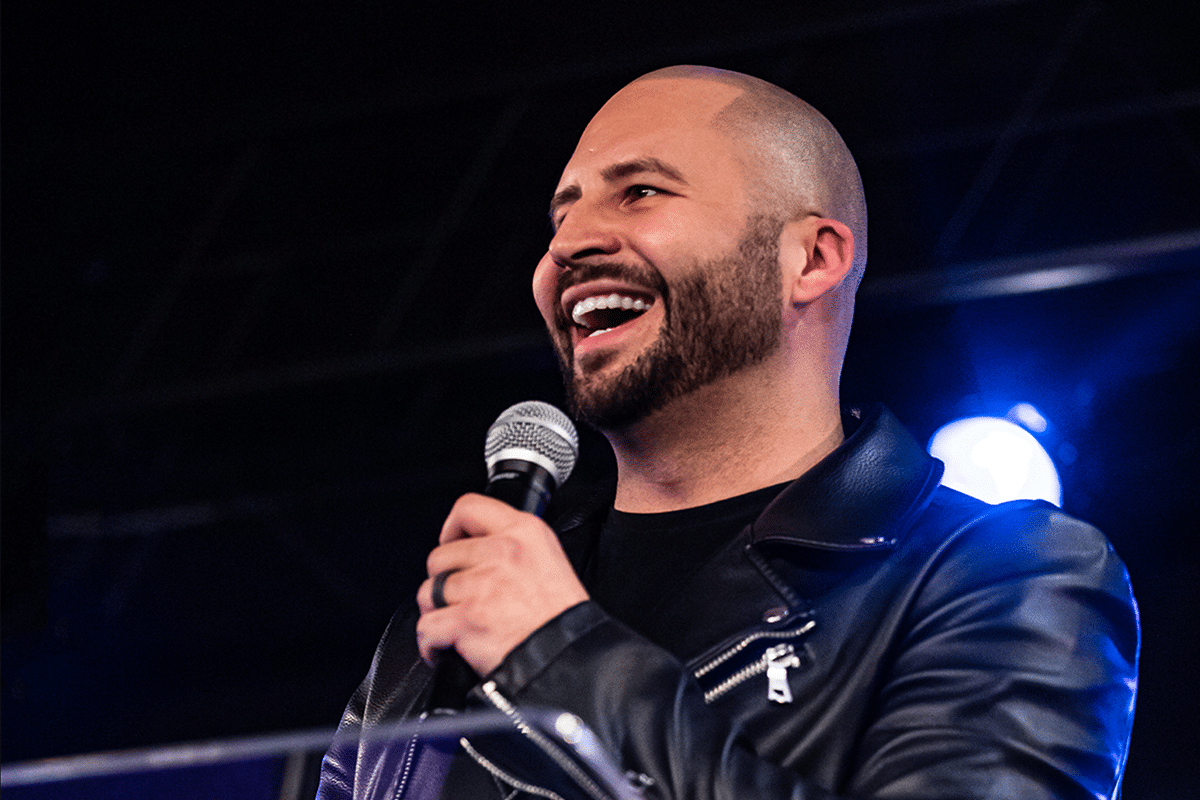 Mike Signorelli is the founder of V1 Church, a growing faith community based in greater New York City.

Pastor Mike, as he’s known to his congregants and friends, founded V1 Church after a later-in-life conversion that he frequently recounts in service. It’s an inspiring story — one with a clear message for the skeptical among us.

Signorelli’s early life was challenging. He dropped out of school in the 10th grade to care for his mother, who was bedridden and unable to work or care for herself at the time. He later re-enrolled and completed a GED program, then went on to college at Indiana University – Bloomington, not far from where he grew up.

At IU, Signorelli thrived. He even taught an undergraduate course in world religion. Yet, through it all, he remained decidedly skeptical about religion, spirituality, even the existence of a higher power. He was not a believer.

That would change. According to Signorelli, the inflection point — what he later understood to be his conversion — came when he attended a futurist conference. There, a preacher spoke persuasively about the growing need for spirituality in the near future. As the preacher put it: “The single greatest need of the future for humanity will be spiritual significance.”

The sentiment moved Signorelli to reassess his priorities and choices. He realized that there were many like him: people desperately searching for meaning, if not in organized religion then in some sort of metaphysical structure. And he resolved to will such a structure into the world: the structure that would become V1 Church.

Together with his two daughters, Bella and Everly, and his wife Julie, who now serves as a co-pastor at V1 Church, Pastor Signorelli relocated from Indiana to New York and began the difficult work of bringing V1 Church to life. His efforts — and Julie’s — have borne fruit beyond his wildest dreams: three locations in three years, $300,000 in donations (and counting) to New York-area homeless shelters, and a thriving congregation united in a mission of self-discovery and community service.

Thanks to the leadership of Mike and Julie, V1 Church has succeeded in doing what few other big-city congregations have: attracting skeptics, atheists, and free thinkers into its ranks. Today, Mike Signorelli and the rest of the V1 Church community live by a simple saying: “Come once and you’re our guest. Come twice and you’re family.”

Where did the idea for V1 Church come from?

The term “V1” is an aviation term that means “no turning back.” When a pilot declares “V1,” they are saying “this is the end of the runway, it’s time to fly.” I started V1 Church because so many feel stuck in life and need a community to bring clarity and help take off into their purpose and destiny.

Vision determines productivity. It’s easy to become so task-oriented, but I reverse engineer vision. I have a daily planner that I review first thing in the morning. In a world full of distractions, it’s so important to focus your attention. I do this through prayer and meditation on the scriptures. I then shift into morning meetings with employees and team leads. Every day at noon Eastern time, I do a live broadcast on Facebook where I mentor thousands of people. In the afternoons, I create content to serve our communities. I really try to guard my evenings so that I can invest in my wife and children.

I’m an experimenter! Ideas morph and change as you attempt to bring them from your mind or spirit and into reality. I talk about ideas, write them (or draw them) out on whiteboards, and construct them. Done is better than perfect. I’m not afraid to bring out version 1.0 knowing that the team will elevate it.

The trend that excites me the most in 2020 is companies being forced to become content creators. There is a lot of innovation happening on social media and it’s an exciting time to connect with people around the world. Get used to looking into a camera; it’s not going away.

I take screenshots of testimonies from people. I capture moments where lives are tangibly changed. I have a folder on my desktop full of these moments. They serve as a constant reminder that when you take an idea into execution, lives are changed forever. It also speaks to the reality that negativity spreads significantly faster and further than good news, so I’ve taken it upon myself to personally amplify the good news as a reminder that what I do matters more than the opinion of critics.

Your relationship with your spouse is a reflection of your leadership. You will never advance your organization further than your home.

Coffee is better warm than hot. Yes, I said it.

You will be remembered for the problems you created or the problems you solved. I do and say things every single day that solve the small and large problems that people face. This mindset and daily practice has caused me to thrive in every season of my life since I started. The fastest way to meet your own needs is to concern yourself with meeting the needs of others.

Our modern culture has generally caused people to be very inward focused. I work very hard to help my entire organization to become outward focused. The acronym “SAM” is “see others,” then “adjust your efforts,” and then “measure your impact.” Deploying the SAM strategy has caused tremendous growth.

One of my biggest failures was caring too much about what people thought early on. I’ve had gut-level instincts about trends and “dabbled” when I should have dove all the way in. Because they didn’t get it, I missed my opportunity. I wanted peers to cheerlead me into it and when they didn’t, I hesitated and watched others take the spot.

Audience building is so crucial. The best business idea right now is to find the digital implications of what you do and nurture an audience into a community of people around that niche. If you can monetize 1,000 community members at $100 a year, you’ve made a respectable income. Webinars, niche-specific merchandise, and etools are increasing in demand, but will be purchased from those they trust.

I had a mentor conversation with a young man who is trying to build wealth, so I handed him the $100 in my wallet in order to invest in his life. The greatest asset is people, so they are my greatest investment.

I love Basecamp. I manage projects, to-do lists, and inter-office messaging all in one place. I used to use Trello, but found that Basecamp was better for teams.

“Captivology” by Ben Parr because the “attention economy” is the most important economy to accumulate. If you can capture and sustain the attention of people, everything else flows from there.

“I can do all things through Christ who strengthens me.” My worldview necessitates there being an eternal source outside of myself. I am limited, God is not, and He is resourcing me for greatness.