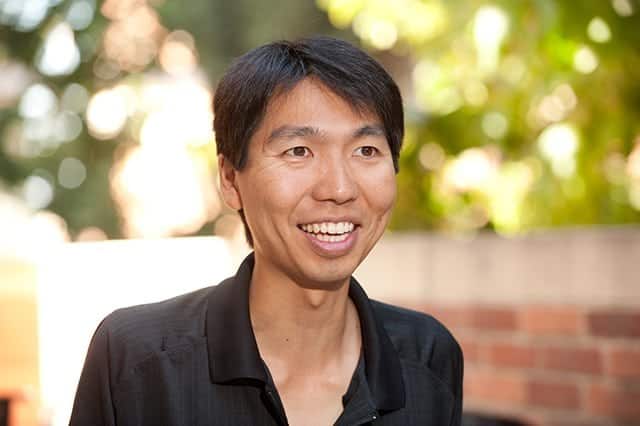 [quote style=”boxed”]Be open with your ideas. Tell everyone you know, and then some, what you are doing. Telling your story makes it real, and you never know when you will meet that special someone who will change your direction for the better.[/quote]

Nicholas has been a serial-entrepreneur since his first startup concept was funded and he left his software-development position at Deloitte Consulting. Since that time he has worked to refine his business skills, serving at different times as CTO, CEO, and Founder of Auditude. A part of Auditude (called IntoNow) was spun-off in 2010 and was acquired by Yahoo in 2011. In November that same year, Auditude was acquired by Adobe Systems.

Nicholas received a BS in engineering and BA in economics at Harvey Mudd College in 1999. Nicholas is Chinese by ethnicity and was born in Australia. He has two daughters, Anya and Maya. He enjoys public speaking, creative writing, and being with his wife Vivien.

I have three babies: Anya (age 5), Maya (age 2.5), and Sivi Your Personal Concierge (4 months)! My company, SIVI , is a web-services platform that provides aggregation and automation of online services to users of connected devices. A reaction to incumbent technologies that attempt to automate the presently un-automatable; SIVI leverages successes in human-powered executive services to enable Sivi – Your Personal Concierge. From your desktop, to your laptop, to your smart or just mobile device, SIVI allows productive delegation of duties regardless of location.

Where did the idea for Sivi Your Personal Concierge come from?

In between playing princess and changing diapers, I thought, there has to be a way to get help for busy people. I remembered back to my days at Auditude, I was busy then, but had lots of help from employees, outsourced agents, etc. How could I tap the latent labor market and make that accessible via a device in your pocket? Sivi is a realization of that dream.

We are taking time from people who are less busy and giving it to people who are more busy – something I like to call Time Arbitrage. A user pays as little as $2.67/task and asks a question on their connected device which is routed to a team of professional Internet surfers who respond.

Sivi is lots of fun to work on. First thing, I look and see what requests were made of our Concierges over-night. These are inevitably from international sources and their questions always make me worry that we will not be able to answer, but we always do. “I want to find the best wigs in Singapore” was a request that came in last night!

Finding the right people is key: the right designer, the right PR agent, the right Concierges in our case, etc, makes all the difference in the world. Once you have the team clicking, the rest is easy, just hands on keyboards.

We really do live in a small world, made all the more so each time someone purchases another connected device. Play this out and it is easy to see a world where everyone is connected all the time. In that world, the concept of turning on your computer to search for something is an antiquated notion.

I would have to say Deloitte Consulting. There I was literally a coding robot, typing away on a concept that I had no part in the creation of, and no part in the delivery of. I jumped ship and hit the startup trail, never looked back.

I am doing it, with Sivi. Start with the business concept and back-fill with technology. At Auditude I created an amazing technology in my garage, but spent the next 10 years trying to find a customer for it! Yes, a killer technology can be a game changer, but first figure out which market you want to plant the flag in first.

Be open with your ideas. Tell everyone you know, and then some, what you are doing. Telling your story makes it real, and you never know when you will meet that special someone who will change your direction for the better.

Feeling like the only role I could play was techie/nerd. While I enjoy coding, getting into the business world via my MBA and finding out that I enjoyed that aspect of business was enlightening. It turns out that technology is only 10% of a business, mostly. Yes, it is a crucial 10%, but you need the whole package, and you can start from any direction to get there.

Haha, that’s easy. Interested in becoming a Sivi Concierge or running Sivi Your Personal Concierge in your own local market? Drop us a line at [email protected]

There are so many problems. Guns, race/gender neutrality, environment, etc. Pick one, build a website, build an audience, fix it. I am working on the problem of unemployment. Sivi helps in that direction as well.

I have a black belt in karate! Ki-ai!

Dropbox.com – all my devices are sync’ed, I don’t store anything locally
Google Sites – you’ve probably never heard of it, but it makes a great intranet for your startup
Stripe.com – this was the “this century” answer to “how do I charge” for Sivi

The Art of the Start by Guy Kawasaki – it is a rambling brain dump, but all true.

Disney’s Bedtime Stories with Adam Sandler. The only movies I can watch are kids movies. Fortunately they enjoyed it as well.

Warren Buffet – not only smart enough to make billions, but also smart enough to know that giving his billions to someone else (Bill & Melinda Gates Foundation) is the best use of his gains.

What is the best question you have had from users of Sivi Your Personal Concierge?

That is a tie between “How can I get in touch with P. Diddy?” and “Help! I locked my keys in my trunk!”

What about helping the needy/orphans/etc?

Like Warren Buffet above, I think people who are gifted at something should do that and then give back once they have achieved their maximum potential. This is a more efficient way to have the greatest impact.