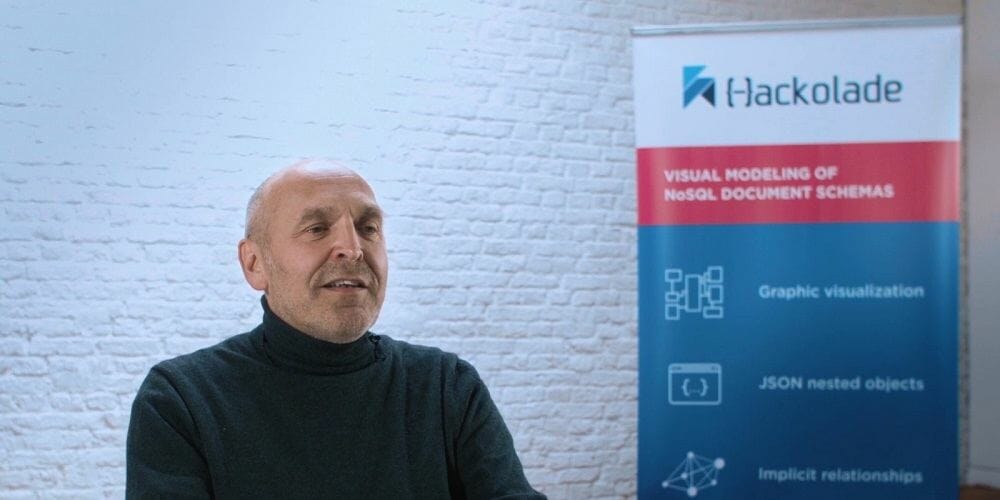 Have frugal needs, so the risks won’t seem so great when you take them.

Pascal Desmarets is the Founder and CEO of Hackolade. He leads the company and all efforts involving business strategy, product innovation, and customer relations, as it focuses on producing user-friendly, powerful visual tools to smooth the onboarding of NoSQL technology in corporate IT landscapes. Hackolade’s software combines the comfort and simplicity of graphic data modeling, with the power of NoSQL document databases, resulting in reduced development time, increased application quality, and lower execution risks.

Prior to Hackolade, he founded and was the CEO of IntegrIT SA/NV, an IT strategy and consulting firm that provided information architecture, innovation solutions, and scalable systems integration for large organizations. Pascal was also the CIO for ARTISTdirect, Inc. a publicly-held startup that was one of the web’s original music destinations and early innovators in the digital music world and online commerce.

Pascal received his Executive MBA Degree from the University of Southern California and his Bachelor of Science Degree, Industrial Engineering and Management, from the University of Louvain in Belgium. He is also an accomplished offshore sailboat racer with crew or solo, having competed in numerous competitions in various parts of the world.

Where did the idea for Hackolade come from?

The idea came from a personal need for such a data modeling tool for NoSQL databases. I searched the web, and couldn’t find one that I would consider trustworthy. So I designed one and tried to have an existing ISV (Independent Software Vendor) create it. Finally, I decided to get it developed, and after some market validation of an MVP (Minimum Valuable Product) in a “lean startup” mode, I determined that I had a real startup on my hands. The feedback from industry users about functionality has been very strong. In addition, I actually use the software every day and am constantly giving feedback to developers so that they can continue to tweak the product. I also respond to customer service tickets, which ensures that we can quickly assign a high priority to frequently requested features.

At this stage, because the startup has not scaled sufficiently, I still have a consulting practice in place. Fortunately, the bulk of the interactions are either with the U.S. or India, and since we’re based in Brussels, it’s easy to do business either before or after my regular workday. Having three separate email boxes helps compartmentalize my life, and allows me to only deal with just one compartment at any given time of the day.

It’s too easy to have half-baked ideas. For ideas to become worthwhile, they need to be thought through to a certain level of details, to make sure that they are realistic and viable, even if, in an agile approach, they’ll be refined along the way. I believe in having a certain rigor to the approach.

Drawing software mockups and articulating the idea in a requirements document may seem “old school,” but it makes a huge difference. In the case of Hackolade, it was critical: the first application design seemed promising, but was only solving simple uses cases. During a click-by-click simulation of the user experience, I realized that it was going into a dead-end. After trying to patch things up without success, I threw away the whole design and started over with a completely new approach. In the end, it not only saved a lot of money in development, but brought to market a much more mature solution.

NoSQL databases are very exciting. After several decades of relational databases, most people thought that only incremental improvements could occur, and that there was no alternative. Then, about 10 years ago, Google and Amazon published ground-breaking papers about NoSQL databases. Trust me, we’ve only begun to scratch the surface, and by no means have we seen the end of this new approach to storing data and getting incredible scale and performance. And it’s not reserved to Silicon Valley startups. The technology is becoming mainstream. It is cost-efficient, reliable, and becoming mature enough to be adopted by Enterprise IT. It just requires a mind shift, and some good tools, like Hackolade, to harness the power and flexibility.

As I think in an outline manner, I’ve been recording EVERYTHING in my life in OneNote for 15 years now. And I keep all this information synchronized in OneDrive across my work laptop, home desktop, and smartphone. It can easily be searched, sometimes even years later.

Have frugal needs, so the risks won’t seem so great when you take them. People always have an excuse for not taking risks, so take the excuse out, and the notion of risk will become mostly irrelevant.

Every change, as threatening as it may seem at first, is an opportunity, if you don’t desperately hang on to the. established situation. Exhale, let go, then just bounce back up!

Surround yourself with smarter people! It creates leverage, it makes things so easy, it relieves the pressure so much. You will earn dividends on eliminating time waste and associated cost waste. What’s the use of owning something small, when you could let others make it so much bigger for you?

Outsourcing. I have found that too many people mistakenly put a great emphasis on having somebody nearby. The odds are low that you’ll always be able to find a qualified and available employee in the local area for everything that needs to be done right to succeed. In today’s electronic world, nearby location is moot. Even key positions are so much easier to scale up (or down if required) with outsourcing. And by setting up the deal correctly, the premium price can be offset by the value it delivers. You end up with a team of champions along with much greater flexibility and create a world-class environment if done correctly.

I spend a lot of time analyzing a project before commencing, thinking through possible roadblocks, and conceptualizing a pathway to the end state. This evaluation process has proven to be successful for me to help eliminate large, costly mistakes before they take hold. On the other hand, the sum of smaller failures that I have made have all had an influence on subsequent projects.

Someone should create a service merging the best of Waze and Google Maps, as running both apps concurrently makes little sense.

I recently took my two teenage boys to a rock concert. They probably were the youngest in the audience, and I probably was the oldest, yet we had such great fun together.

To create Hackolade, I spent several days designing and simulating the use of the software with Balsamiq, a terrific wireframing tool.

What is the one book you recommend our community should read and why?

Since “Atlas Shrugged” and “Lean Startup” are already on the Idea Mensch list, let me suggest “Linchpin” by Seth Godin. You don’t need to have a startup to be an entrepreneur. Everyone can be an entrepreneur at its own level, in a company of any size. And if you have kids in school, I recommend, also by Seth Godin: “Stop Stealing Dreams.”

“Vision without execution is a daydream. Execution without vision is a nightmare.” Also, in another form: “The devil is in the details.” It’s so easy to come up with an idea a minute. But the real entrepreneur is the one who takes an idea, develops it, produces it, and delivers it to achieve customer satisfaction.