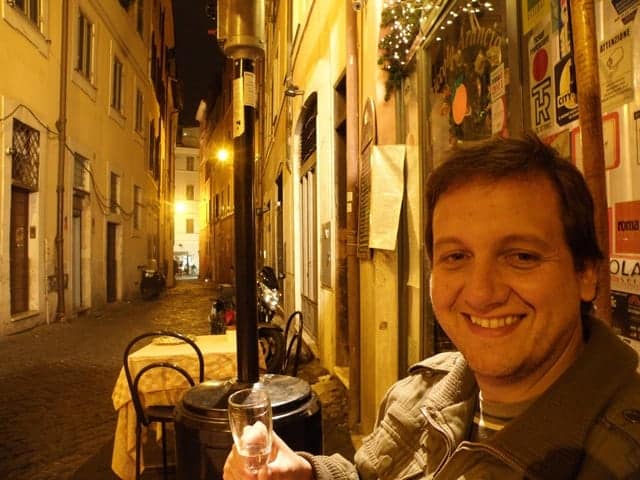 [quote style=”boxed”]I would focus on following my passion. It’s a stupid mistake to think that you need to give up what you love in order to make ends meet.[/quote]

Raphael Caldas is a Brazilian entrepreneur, a lawyer by profession (and by accident), and an amateur musician. He loves being a father and wants to make the world a more playful place.

I’m presently working on Aherk!, which we advertise as a “goal-oriented self-blackmailing service.” It’s a Facebook application where users can define a goal and set the corresponding deadline. After that, they’re asked to upload an incriminating photo, something they really wouldn’t like to see published anywhere. When the deadline is reached, their friends can vote to say if they’ve achieved their goal or not. If they failed, their photo is published on their Facebook feed, on Aherk!’s Facebook page, and on our website. And it will be there for posterity.

Where did the idea for Aherk! come from?

This is a typical case of scratching your own itch. In the middle of 2011, I was disappointed because no matter what I did, I wasn’t able to quit smoking. I started thinking out of the box, looking for a solution that would be effective for myself, and the concept of “self-blackmail” emerged as a natural answer. I developed a prototype, showed it to some friends, and when I got some positive feedback, I started improving it to make it a real product.

Most of my day is still tied up with lawyer stuff. That’s still where I get most of my income from, income which I need more than ever since I’m bootstraping Aherk! and a Facebook dating application targeted at the Brazilian market called “Te Pegava.”

I love to code and spend hours in front of the computer without even noticing the time go by. I’m a bit neglectful about the marketing side of things, so I’m trying to spend more hours in the day building connections and spreading the word about my products.

With anxiety! I’m not very patient. Once an idea finds its way into my brain, I simply can’t stop working on it. This is a terrible mistake because sometimes you need to step back. It’s important not only to better assess what you’re doing, but especially when you’re stuck and need to come up with a solution. If you don’t take a break, something that would take five minutes can take five hours.

Some would argue that it’s an old trend by now, but I’m still fascinated by the mobile experience. The fact that a lot of people carry a powerful computer-like device in their pockets during the whole day opens a lot of possibilities for experimentation and to build cool stuff.

Actually, my worst work experience was when I had two jobs in different cities. I’d wake up real early, get in my car, and drive to a neighboring town. Then, around lunchtime, I’d drive back and work until late. And it was quite a long distance. I’d spend no more than seven hours at home during weekdays. I learned that selling your time, trading your time for money, is never a good deal, no matter how much you make. This inspired me to build products instead of selling my working hours.

I would focus on following my passion. It’s a stupid mistake to think that you need to give up what you love in order to make ends meet. Especially today, when we have a lot of cheap channels to get to customers and reach niche markets, there’s always a way of making money out of something you love.

I’ll stick with the corny line because it’s absolutely true: I fail. And then I fail again. And every time it feels awful, but it’s the most essential and fruitful experience you can have as an entrepreneur. Not only because of the obvious outcome of learning from your mistakes (or at least trying to learn from them), but also because in the long run it results in innovation. After all, if you tried launching that infallible business and it was a complete fiasco, why not start thinking outside of the box and bring your own personality and unique business ideas to the game? If the risks are the same, you’ll end up doing what rings true to you.

I think the hardest part is making ends meet in the beginning. I’m tied up to an old lifestyle that I still haven’t managed to leave behind completely, but I’m much closer now. Perseverance is the key—focus on your vision. This doesn’t mean holding on to bad ideas or businesses that are not lucrative. It means not giving up on the “big dream,” which sometimes mean leaving bad ideas that may have consumed a lot of your time and resources behind.

A collective buying service for businesses that doesn’t focus on impulse buying (which simply doesn’t work on B2B), but rather adopts an inverse auction approach.

I would inspire adults to play more. Play is an important part of the human experience, but our society seems to have forgotten that. People take themselves too damn seriously, and this has terrible implications—not only to their own individual lives, but also to the society as a whole. One of these consequences is that people have the idea that they can’t make mistakes, and without mistakes what we have is stagnation. Changing such an entrenched misconception takes time. My first step is to try to take myself less seriously. The second one is building toys disguised as computer applications for grownups.

I’ve been trying to learn meditation for years now and I simply can’t do it. Not even five minutes. One minute, ten seconds. It’s pathetic and very frustrating.

It’s hard to stick to just three. For starters, there’s nothing like Google Apps, which is a complete and reliable solution that can be used for free by small businesses to handle email, calendars, documents, groups, and more.

Heroku is a fantastic PaaS (Platform as a Service) that now supports a lot of different programming languages. Deployment is super easy and it can be run for free, which makes it an ideal choice even if you’re still testing your product.

SEOMoz has great tools if you’re serious about search engine optimization. On top of that, you’ll find a great friendly community on their site that will help you learn all the ins and outs of the game.

Made to Stick by Dan and Chip Heath. This is a fantastic book about how to communicate ideas in a way that people remember. It’s an extremely easy read, and any startup can benefit from it.

I’m not a Twitter regular, but the three people I tend to get most useful tweets from are Amy Hoy for “outside the box” ideas, Robert Scoble for info on the startup scene, and Jeremiah Owyang for a marketing perspective on things.

About three weeks ago, I watched an Australian TV program where they were reviewing Aherk! The reviewer absolutely hated the app. Called it “completely bizarre,” “the weirdest website,” “a gimmick.” I think she completely missed the point, the playfulness of the the game—but as I said, I don’t take myself too seriously, so I’m able to enjoy even the fiercest critics of my work.

I don’t believe in heroes, but in ordinary people who dream and work on their dreams to make them a reality. If I had to come up with something, it would be a mix of Gandhi (without the vegetarianism), Willy Wonka, Steve Wozniak, and Frank Zappa. Nice little monster!

What’s the biggest mistake you made as an entrepreneur?

Actually, it’s something that I must confess I still do given my fixation for bringing ideas to life. But launching products without a clear business plan or at least a sketch of an idea about how to make money out of them invariably leads to frustration. You always learn something from the experience, and you’ll most likely have fun, but if you’re “in it for the money,” think business first.

What’s the one experience in life that changed you the most?

Having a child. Since my son was born, I have changed a lot. I remembered the importance of play, which is now a central concept in my life. Having someone depending on you so much is also something that gives you strength to face any challenge. And being able to listen to and learn from someone that’s not poisoned by the cog mentality yet is absolutely wonderful and makes you way more creative if you’re not an authoritarian freak.