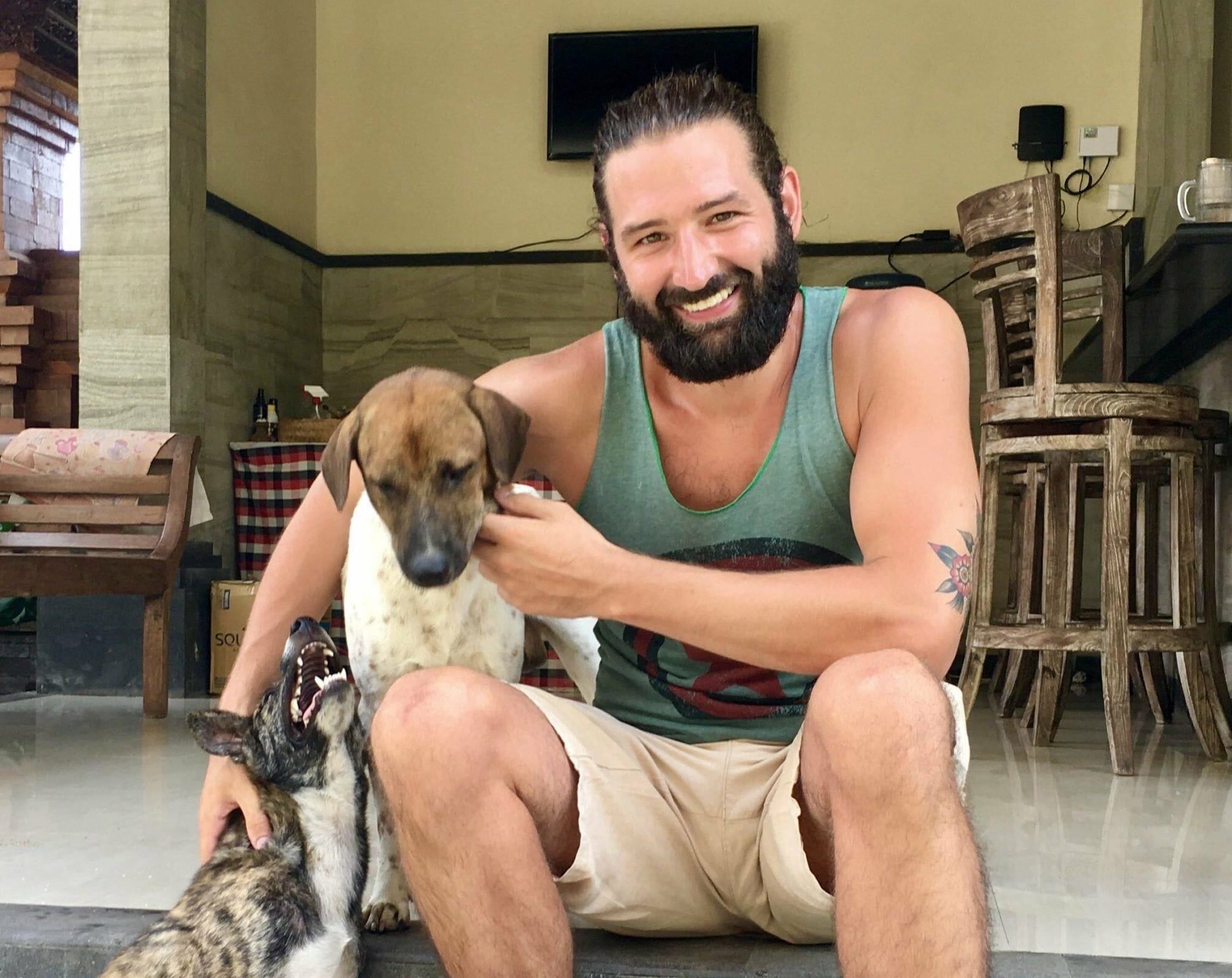 Radical entrepreneurship is going to change the world for the better. There will be missteps, and progress might not be a straight line.

Rob has worked in English language teaching for over 10 years, in a variety of roles: as a teacher both in Boston and abroad in the cram school culture of Taipei and Seoul, as a curriculum coordinator at an academic language school, and as a nonprofit program director. He has a master’s degree in Teaching English to Speakers of other Languages (MA-TESOL) from The New School.

Rob writes, presents, and blogs about teaching English, program administration, and advocating for English language learners. He holds several volunteer positions, including co-chair of the Adult Education Interest Section at TESOL International and communications committee of the Open Door Collective.

Where did the idea for Ginseng come from?

When I worked at for-profit English schools, I was frustrated by the tension between maximizing profit and effective education. Unfortunately, the best way to make the most money in the industry isn’t just to teach English as effectively as possible. Profit usually comes first, and that means corners get cut, compromises are made. And in these for-profit schools, you’ve got empty seats in most classes, waiting to be sold.

I later moved to non-profit, but there I was frustrated too. There is a well-documented need for free English classes across the country. Every single state has waiting lists. At my small program there were 200 students waiting for classes. The waiting time was over 2 years.

That image drove me crazy: thousands of students desperately in need of English on these waiting lists while just a mile away there are dozens of empty seats with price tags on them. I ran through a hundred ideas for bringing those parties together, but hit roadblocks. The worlds of for-profit and non-profit ESL are heavily divided. I eventually came to the conclusion that what is needed is a new model, a social enterprise model that measures its success in more than just profit.

This is where the idea for Ginseng came from. The internet allows us to bring together people from different backgrounds and different geographic locations into the same class. Each additional student in a class can either be more money in the bank or a person in need getting classes they really need. We count both of those outcomes as a win.

I’m probably not your typical buckled-down entrepreneur. I’m not making my bed every morning or following Tim Ferriss’ advice to ‘win the morning’ while improving my grip strength. I think I’ve learned to channel some mild ADD into a workflow that works for me.

I wake up when I wake up, which tends to be around 7. I get coffee #1 and bring it back to wherever I’m staying. I clear my inbox and do some relatively mindless social media tasks for the day. Around 9 or 10 I head out to a cafe for coffee #2. That’s when I get most of my work done. After lunch I tend to work more on creative projects that I am excited to work on, just to keep the momentum going.

Most of my ideas end up being visual both because of the way my mind works and because ours is a digital school (so every aspect of it involves design). So whether it’s a workflow or a new curriculum, an idea for a marketing campaign, whatever, I sketch and do lots of drafting. I do most of this on my iPad now so I don’t have to fill my backpack with notebooks.

We are witnessing the rapid death of the career as it was once defined (a job that was good enough that you kept it till you died and were rewarded for your loyalty). Now it’s normal, if not expected, to change jobs every few years. This is incredibly freeing for both the individual and industries. It allows us to explore different facets of our field and become far more well-rounded. Right now, we’re still young, the generation for whom this is the norm. I’m really excited to see what we will do when we’ve all got decades of experience jumping from job to job.

Walking! I walk everywhere, and whether it’s a hike in the Himalayas or just a long walk through a big city to find some dumplings, I do all of my clearest thinking while walking, and I come back and get a ton done. They say that having a messy desk stimulates creative thinking. My theory is that a forest or a city provides that same kind of stimulation on a huge scale, and then you get all the endorphins swirling around in there.

Oh man. I was a useless teenager. I was too busy trying (and failing) to seem disaffected and cool. I’d tell myself that it’s okay—more than okay—to care. Be passionate. Don’t be ashamed of being passionate. Follow and share your passions.

Radical entrepreneurship is going to change the world for the better. There will be missteps, and progress might not be a straight line. Right now it’s the cool, facile thing to do to hate millennials and make listicles ranking the things they’re “ruining.” That’s really dumb. This is a generation that is socially conscious and entrepreneurial. That combination, combined with the tech boom, the whole angel investor thing, this is the perfect storm for some world-changing social entrepreneurship. Some of the more radical ideas will get funding, and some of those will have a huge impact for the better.

The notion of continuous improvement is important to me. We’re a small company, and we can’t be everything to everyone overnight. One way to keep ratcheting things up with continuous improvement is to seek feedback constantly and sincerely, and then to act on that feedback. If someone likes your product, what do they like. If someone doesn’t buy, was there anything we could we have done better? We’re constantly revisiting our customer journey, pinpointing and prioritizing the areas that need to be tweaked.

I hate the term, but I started Ginseng as a “side hustle” while working full time. This gave me over a year to build some momentum and money and get the pieces in place to launch. I didn’t want early stage investors, and I didn’t want to go into debt. I had a job with some disposable income so I put it straight into Ginseng. I hung on at my last job longer than I wanted to, but in the end that was a far better option than just quitting and borrowing money.

When we were identifying our target markets, one of the most promising was Vietnam. We got pretty far along with preparing a marketing push there when we realized we’d made a big oversight: Vietnam doesn’t use credit cards and getting set up to accept their local forms of payment was far more of an undertaking than we were prepare invest in at the time. We honestly haven’t exactly overcome this specific issue yet, but we hadn’t put all of our eggs in that basket so it was easy enough for us to pivot toward other markets while we keep an eye on Vietnam.

America has finally figured out that soup dumplings (xiao long bao) are one of the world’s most perfect foods, and you can find them in most major cities now. That’s great, but in Shanghai they have a variation that’s actually way better. Sheng Jian, they’re called. Slightly thicker dough and pan fried until they’re crispy and brown. Bring these to Boston or New York and you’ll have a line down the street for months.

A Huawei 4G wireless hotspot. I am moving from country to country every month, and trying to balance running a business with climbing mountains and exploring little villages. With this thing I just get a prepaid data SIM card at the airport, and I can get online anywhere I go. Absolute game-changer.

A lot of the content we put out is heavy on visuals. We’ve been using Over for a while now. It’s a really simple graphics app that enables you to put together some slick, branded visuals in just a couple of minutes. There are alternatives out there that are more popular, but not many of them allow you to easily insert a nice crisp transparent PNG of your logo, and color-match it like Over does.

I don’t love business books; they tend to be too similar to self-help for my taste. Elena Ferrante’s “Neapolitan Novels“. These books both helped me to better understand human ambitions and shortcomings, privileges and handicaps, so many of the forces that shape who we become and the decisions we make, both rational and irrational. Fiction should be part of every entrepreneur’s reading list.

A quote that really sticks with me is from Italo Calvino’s strange little genre-defying book, Invisible Cities. The line is, “Elsewhere is a mirror in negative.” It’s spoken by a fictionalized Marco Polo, explaining to Kublai Khan how travel to foreign places tells us who/what we are by showing us who/what we are not. He’s talking about travel, but he could just as well be talking about business: the more you learn about what else is out there, even at the furthest, seemingly distant reaches of the field, the better you will understand your own mission and work.