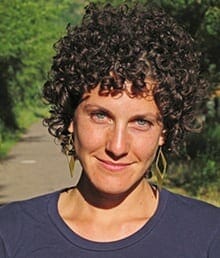 [quote style=”boxed”]I think the job I hate most was working as the front desk manager at a yoga studio in Berkeley. It really brought out the impatient side of me. I think that job taught me about navigating relationships with corporate management. It also taught me that yoga studios should never be carpeted.[/quote]

Sarah Rich is writer, editor and new media entrepreneur. She is a co-founder and editor of the Knight-Batten award winning Longshot Magazine and curator of the international conversation series, Foodprint Project.

Sarah is a former senior editor at Dwell and former managing editor of Worldchanging, the award-winning online publication focused on solutions for a sustainable future, where she co-authored and edited the bestselling book, Worldchanging: A User’s Guide for the 21st Century (Abrams, 2006). She is also the founding managing editor and current senior editor of Inhabitat, one of the most widely read websites on sustainable design and architecture.

Sarah received her BA from Stanford University in Cultural and Social Anthropology and began her professional life in the world of food. She is a founding editor of Civil Eats, a nationally-recognized website about farm and food policy, and recently completed a book about urban farming, forthcoming from Abrams in spring 2012.

Her work has been published in Wired, The Atlantic, BusinessWeek, the Globe & Mail, Huffington Post, Creative Review, The Bold Italic and elsewhere. She has lectured in Brazil, India, the United Arab Emirates, and throughout North America, and has been a new media and sustainability expert commentator on NPR, BBC World Service, and Current TV. She serves on the board of directors for Project H, a non-profit organization working to promote humanitarian design, and Ambidextrous, the quarterly journal of the Stanford University Design School.

In addition to Longshot, I’m currently working as an editorial consultant for a couple of magazines and a design organization, planning the next Foodprint Project event in Los Angeles, and doing some freelance writing.

I spend most of the day (for better or worse) at my computer—reading, researching, writing and communicating with people by email and IM.

I think the job I hate most was working as the front desk manager at a yoga studio in Berkeley. It really brought out the impatient side of me. I think that job taught me about navigating relationships with corporate management. It also taught me that yoga studios should never be carpeted.

I’m excited by what I’m seeing in web publication design that really makes use of screen real estate to do beautiful visual design. Also excited by innovation in payment systems, like the “nagwall” our awesome developers created for Longshot Issue Two, which enables readers to pay for content using  either money or social currency (sharing on facebook or twitter)—which really underscores the potential to give real value to actions and not just dollars. Third, I’m excited to see a surge in indie media projects, both online and off. It seems like there’s a new sense of empowerment and activation among creative people, and a lot of awesome products and ideas are emerging from that.

With Longshot, the ingredients are basically boundless brainstorming and motivated people. This time around, for example, Jody Avirgan (who is a producer for the Brian Lehrer show at WNYC by day) asked us about doing “Longshot Radio.” None of us knew what that would mean when he pitched it, we just said yes and then he ran with it. That idea came to life in the forms of a Storycorps-style booth at McNally Jackson Bookstore in Soho, where he and his team recorded audio stories with people passing by; a set of beautifully produced short podcasts from those stories; a full-length podcast on the theme of Debt (the issue theme); and a short video about their process. We were blown away. The idea more than came to life, and it was really just because a bunch of creative, smart, motivated people collaborated to make it happen.

The above, for sure—I’m inspired by the talented, dedicated people who rally around Longshot and make each issue better than the last. I’m inspired by the variety of ways people interpret our themes and tell stories. Each time, we put out a fraction of what we get back in terms of the breadth of what this project can be. We create a platform and a timeframe and a theme, but our community and audience really show us what it can be.

The very first time we did the magazine, we underestimated the managerial task of tracking and sorting submissions via the content management system. Since that time, we’ve had Erik Malinowski as our managing editor and he keeps things running smoothly. We also couldn’t foresee how the time constraints and the size of the magazine would be for the print design team, or the challenge of orchestrating the final stages of hand-off from editors to design. We are still perfecting that process.

We had great success this time around selling ads as part of our Kickstarter fundraiser. We basically just made ad pages a reward for our biggest donors, and we raised $7K+ that way. We are using that money to pay contributors.

A lot of my reading comes through links from the people I trust and follow on Twitter, so it varies. It’s pretty much 100% guaranteed that I’ll hit the NY Times several times a day. I usually hit The Atlantic a few times, Mother Jones, the Washington Post. Often Fast Company or GOOD. Then a number of online pubs/blogs, like Design Observer and my Foodprint Project co-founder’s awesome site, Edible Geography. I also wait eagerly for The Atavist to publish new stories.

In the realm of new media, I certainly think Clay Shirky’s Cognitive Surplus is a good one. It’s a great exploration of the social consequences of new technologies/media and how individual creativity is evolving.

My Longshot co-founders, @alexismadrigal and @mat. Also @brainpicker for a constant flow of great ideas and discoveries.

You should talk to Rita J. King. She’s currently leading new projects at Science House in NYC, she’s also innovator-in-residence for IBM and always has new endeavors on the horizon related to science, technology, creativity and the future.

Yesterday, while reading Go Fug Yourself.