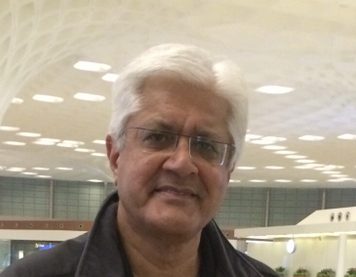 Anything is achievable when you are focused. Determine the expertise that you require and reach out and build a team.

Some people retire to a quiet easy life, others retire to travel and see the world. As a serial entrepreneur, Shabir Premji retired only to re-immerse himself in business as an energy industry entrepreneur. As Chairman & CEO of P Squared Renewables Inc., his vision will heal the planet by reducing the human carbon footprint and eliminating the need for fossil fuels. Renewable energy is his solution to a kinder, gentler way of healing the earth. Renewable energy will lower costs and reduce the use of fossil-based input for the creation of energy.

Shabir Premji began his career as an accountant. He earned his CA at the Institute of Chartered Accountants in England and Wales, in the late seventies before he migrated to Canada. His first position was with KPMG from 1980 thru 1987 and his first position in industry was as VP of finance for an oil pipeline valve-manufacturing company. He remained there until the company was sold four years later.

Premji then joined a Cabinet manufacturing company as CEO. While here, he simultaneously started an oil & gas business. This business morphed into three oil and gas businesses and two Gas marketing businesses. Each company thrived for many years. Subsequently, Shabir Premji sold all businesses in 1998.

In 2003 Mr. Premji opened his first publicly traded company on the TSX-Venture Exchange. As founder and Executive Chairman of Alberta Oilsands Inc., Mr. Premji took a one-million-dollar initial investment in start-up capital and grew that into a company with a market value of 150 Million dollar, within seven years.

Shabir Premji launched P Squared Renewables Inc. two years ago. His new venture in the renewable energy industry will focus on solar, wind, storage, geothermal and other energy development. It will include energy storage and power generation projects. With a focused effort on renewable energy solutions, we can look forward to the lower cost of energy and a start to the healing of the planet.

Where did the idea for P Squared Renewables Inc. come from?

The idea came while sitting on a beach in Mexico. I had just left an E&P oil and gas company. It was 2016 and the Paris Accord had just been signed. It was the first time that all of the major countries in the world were signatories and demonstrating seriousness about addressing the environmental impact of greenhouse gases on the global climate. They wanted to address the issue of fossil fuel emissions. When the world’s governments overwhelmingly committed to undertaking this challenge, it was time for industry to get on board, as well. I believe that despite the hiccup of President Trump withdrawing the United States from the Accord in 2019, it is a path the world is now inexorably on and I wanted to be part of this new and exciting journey to bring a solution to the problems related to climate change.

I am typically at the office by nine o’clock in the morning. I believe you have to be disciplined to be productive. At the end of each day, I make a list of things to accomplish for the following day. The list keeps me focused and driven. I like to know what to expect of my day. I leave for the evening at five, and head for the gym 3 times a week.

I get my ideas by reading, for the most part. I read journals and keep up on trends that affect the world. I pay attention to how the world is evolving. I have discussions with various individuals about my topic of interest. It keeps me open to ideas. It helps to narrow the focus.

The renewable energy trend I am excited about is the new applications developed through technology. Technology is making processes much more productive. In the renewable energy sector, there are various underlying sectors. It is not only about windfarms and solar panels, on some exciting technologies being invented to both produce energy much more efficiently and from sources that until now were more of a burden. For example, now technology allows for municipal waste to be converted to energy or jet fuel.

We also have to look at Storage because wind and solar are variable energy sources that require that a baseload to be available to provide consistent and on demand energy. Until now, fossil fuels like coal provided that base load. However efficient Storage solutions will enable us to have the confidence that constant and on-demand energy will indeed be available at all times. This makes storage an extremely important factor. The key to becoming a completely renewable energy dependent world is having the storage technology robust enough to create efficient ample storage capacity capable of ensuring constant energy access.

I am a serial entrepreneur and I operate by identifying the essential factors necessary to make a project successful. One has to be able to look at a business model and determine its prospects and potential and whether it has the necessary runway to evolve into a successful and profitable entity. Specifically, I bring a disciplined and analytical approach to assessing the market potential for that business and thereafter determine capital and expertise requirements necessary for the business model to be successfully executed.

Firstly, I would tell my younger self not to limit myself. In my earlier years, I was not less confident in my decisions. Secondly, as a Chartered Accountant, I should not have limited myself to the profession.

Secondly, I should have broadened my horizons and expanded my vision. I should have simultaneously pursued a diametrically opposing scientifically based degree and capped it off with a Master’s degree in business.

Keep an open mind and be receptive to other people’s ideas. Listen. It has been very helpful in achieving my goals.

I wish I started listening to my gut a lot earlier in life. Experience has shown me to trust my intuition. As a result, there are fewer missed steps.

Renewable energy storage. It is a key area and it will become a massive, massive industry. It is at its infancy now. Technology has to evolve to make it efficient.

I love Excel. Perhaps it is because of my accounting background. When I am modeling and assessing opportunities. I can easily do my due diligence using Excel. I use it for planning and budgeting. It is the most productive application that I use.

I would recommend an older book that I have come across. The book is Confident Decision Making, by Rodger Dawson. The book discusses how to prepare so that your decisions can be made with the utmost confidence. Not having confidence simply comes from a lack of information. If you assess the data to its fullest, your decision will be made with confidence.

Bring a spark to everyone you meet.

• A confident leader brings powerful energy that builds a much stronger team.
• Anything is achievable when you are focused. Determine the expertise that you require and reach out and build a team. Anything is achievable.
• Robust Storage Capacity is the key area to having renewable energy. It will become a massive, massive industry. Storage development is in its infancy right now.
• Learn to trust your intuition. There will be fewer missed steps