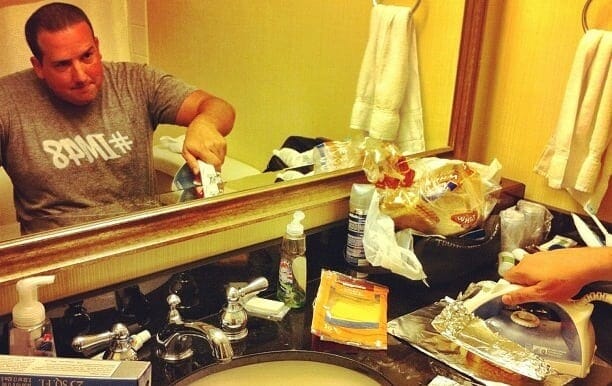 A few months ago we set out to road trip across America to organize an event in all lower 48-states. We started at the beginning of July, and yup, we’re still on the road.

We’ve heard hundreds of entrepreneurs share their stories, stayed with a pig farmer in Iowa and made grilled cheese sandwiches with an hotel iron (see above).

We’ve traveled to 34 states so far, and have another 14 left. For some reason I thought that by now this would be super easy, but that really hasn’t been the case. So I figured it would be kind of interesting for me to share three of the more important lessons I have learned on this trip. I think anyone who has started something can relate, but I am a first time entrepreneur so this is all new to me.

At some point, you need to stick your head out of the window

The only way you can win or succeed at anything is by trying it. Unfortunately, the majority of times you’ll stick your head out of the window and get pummeled by something unexpected. Eventually you’ll learn a lesson or two, tweak your strategy and ultimately and hopefully succeed. It’s not always going to be fun, it will oftentimes be hard, you’re going to feel lonely from time to time but ultimately the only way you’re going to win is by trying. So if you have an idea, you need to stick your head out of the window and give it a go. Whatever hits you in the face, call it progress.

Nobody cares as much about your idea as you do

I spent 10 years in corporate America. There you cared about your job, your income, your co-workers and then maybe a little bit about the company or idea you’re clocking in for every day. But when push comes to shove, there are always things more important than the company, the idea or the product. When you’re an entrepreneur, you’re the holder of the idea. It’s your company, your product, your baby – your game to win or lose.

Being a first time entrepreneur, this is a completely new experience for me. If I have a bad day, we’ll have a bad day. If I give up, we stop.

That’s why you really need to have a strong reason of why you’re doing what you’re doing. That doesn’t mean your idea has to be your passion (I’d be interviewing German soccer players), but there needs to be sort of bigger goal you’re chasing. Because entrepreneurship is hard, and if you don’t give a shit – you’ll eventually give up.

I always knew that I wasn’t going to give up on this trip. If I have one redeeming quality other than my German broken accent it’s that I am stubborn as hell. But too many people give up too early on their ideas.

Bringing an idea to life is hard, and it takes time. You’re going to make many mistakes, learn important lessons and then change your strategy accordingly. You might have to do that two or three or five times and while that’s not fun, it’s the most normal part of bringing an idea to life.

Hang in there and don’t give up. Surround yourself with positive people, do the things that make you stronger and that are good for YOU and keep going.

So if you haven’t started yet, do.
And if you’re ready to give up, don’t. Keep going.

Here are our October stops. If you can help us promote these events, or connect us with folks on the ground – I’ll be forever grateful. Shoot me an email or share away.