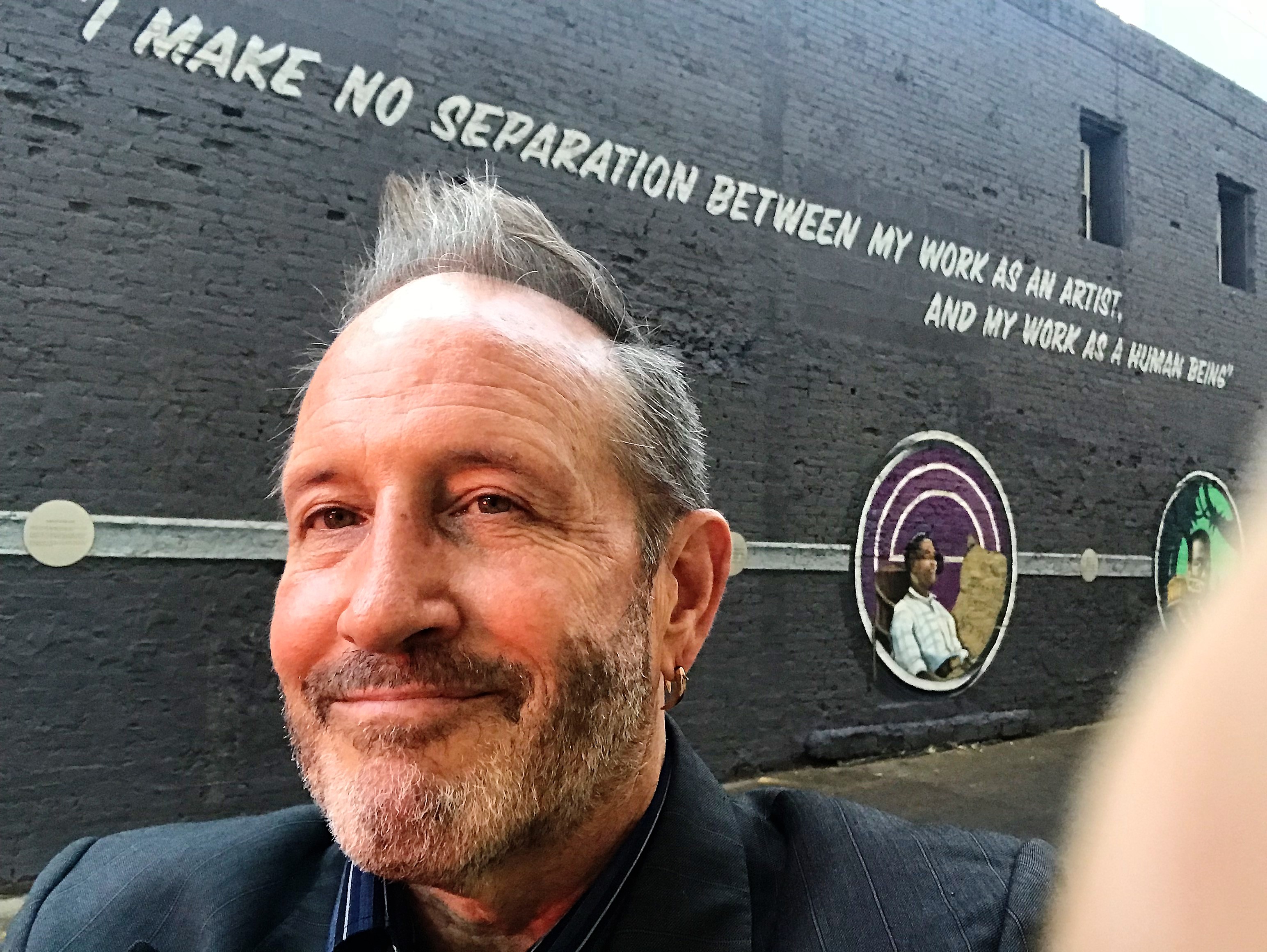 Constantly reinvent yourself and your company, embrace technology and change, and be forever young in all things you pursue.

When in San Francisco during the dot.com boom, where he was involved in many start-ups, Steve launched iiHiphop, one of the world’s first online hiphop music portals, produced several theatricals, and created television pilot “San Francisco Live!” From there he moved to Hollywood, executive producing feature film A Midsummer Night’s Rave (with Gil Cates, Jr., son of the Producer of the Academy Awards) and NAACP award-winning theatrical Ephraim’s Song (with iconic movie stars Bruce Willis and Cedric the Entertainer). When opportunity knocked, Steve bounced to Las Vegas and helmed rock and roll media company Vegas Rocks, interviewed and photographed dozens of the biggest bands in the world, booked and promoted 1000+ live shows worldwide, and personally managed 7 x Grammy-winning music producer Steve Thompson, as well as 2010 America’s Got Talent winner Michael Grimm, among others.
A prolific author/collaborator/story editor/book consultant, Steve is published in fiction and non-fiction as a ghostwriter, co-writer, | with writer, and solo author, counting among his dozens of works/books/articles/blogs the critically-acclaimed legal thriller, Conflicted; the 30+ year legal practice book, Labor & Employment in California; the inspired-by true story/legal thriller, The Food Mafia; non-fiction health/diabetes/wellness books, The Fast Diabetes Solution and In Search of Natural Support for Diabetes Wellbeing, the Discovery of Lysulin; inspirational memoirs, Conquering Your Adversities, Finding Hope in Chaos, The Ambassador’s Son, and Lift Up Your Head; and family drama, Cameron. He currently has 12 works/books in development, including Lionhearted, the story of the reigning bare-knuckles world champion, Shae Stanford, and Redesigning Your Life After 60…Abundance from Age 60 to 120.

To raise money for charity, including endurance challenges for Team In Training (which raises money to pioneer cancer breakthroughs), Steve has climbed to the top of Mount Shasta aka White Mountain (14,000+ feet) three times, swam Alcatraz-San Francisco Bay three times, and run three full (26 miles) marathons. Though American, Steve lives most of the year with his family in magical Somerset, England, where he regularly aids his wife in the production of PostiveTV.tv, the oldest online positive news /positive media platform on the planet (celebrating its 10th Anniversary this year). As part of Positive TV’s new push, he is also co-hosting Eggman Rock N Roll Radio with iconic London Hippie/Mayoral Candidate Lee Ian Harris and rock aficionado and lifelong best friend, John Neyer, Jr. (who together are also doing the story of Lee’s life, so watch out, Hollywood!).

During breaks, Steve carries on a side career drawing and painting, with the goal of becoming one of the world’s leading horse painters. Learn more about Steve’s renaissance life at SteveEgglestonWrites.com.

I was writing scripts, languishing in Hollywood, when my friend Paul Aratow (Producer of Sheena, Queen of the Jungle and co-founder of Chez Panisse Restaurant) said, “Stevie, put down the scripts and write a book. They make 20 pictures a year and thousands of books are published.” So I did, and three years later I had a published, critically-acclaimed legal thriller. From there I launched SteveEgglestonWrites.com and have written/published two dozen books and hundreds of articles, blogs, white papers and web content since.

My typical day is wild from the get-go, beginning with my attire. I mix pinned-down lawyer-style duds with colorful rock n roll artist attire, such as wearing fisherman’s pants, a collared shirt and two interwoven neckties beneath a tailored double-breasted jacket. Before dressing for success, I check and reply to all my emails (usually up about 5am) and send out invoices/attend to business. After taking the children to school, I dive first into the creatives stuff, while I’m at my most energetic and inspired (I’m a morning person), then alternate between writing a dozen books, white papers and articles over the day, depending on my palate. During breaks, I return more emails and messages and post on social media. Mixed in with all that, I draw and paint, always grooming the artistic neurons (at the moment, I’m on a mission to draw or paint one horse per day for one year, 365 in all to launch my horse art side business). At the end of the day, I button up all my categories and go home, where I often make dinner, all from organic…and often take a lovely walk with my wife or play with the kids or indulge esoteric movies.

I bring ideas to life by living a life with few creative filters and acting strongly and intensely on virtually all inspired ideas. I’m prolific as a human being and might have been a sprinter in another human life or rocket booster in an inanimate one. From there I create the end goal and diligently build toward it one step at a time until I arrive at my destination, adjusting my strategy as I go (running for daylight, I used to say, before OJ took his fall – that’s the name of his early highly inspiring book). Because I’m always advancing at least a dozen ideas, books and projects, the key is to be relentless and never to make a separation between my work as an author/artist and my work as a human being.

The trend of practicable immortality, or at the very least the massive trend of people believing they can lead a long and prosperous life far beyond traditional retirement age. The growing frequency of people genuinely believing that 70 is the new 50, 60 the new 40, and 50 the new 30 – is tremendously exciting and healthy for the human spirit. Me, I think 120 is the new 87 (the average life span for men).

Always being a passionate, hardworking creative who meets expectations and deadlines and strives for perfection whilst understanding perfection must be shaped by budget and the need for self-sustaining profit.

Be 110% committed to holistic health and artistic productivity, i.e., party less like a rock star and be high on life. Put another way, always do what needs to be done to feel your best when you wake up in the morning.

Retirement is hospice, i.e., it is a death sentence that should be banished from all human language. Don’t think it or do it because it will kill you.

Constantly reinvent yourself and your company, embrace technology and change, and be forever young in all things you pursue.

Do not be afraid to do whatever you need to do to get where you’re going. If that means failing 100 times, so be it. Shoot for the stars and if you land on the moon, that’s all right, too.

I started a record label without fully understanding how money was made in the record business. A notion of it is not enough. Always have the crystal clear certainty of a bank robber on how you will make money if you succeed in doing what you’re doing.

Create the cover for your book before you even begin writing it…because that way you know where you are going and you will be sure to get there. This trick was used for years in the movie business, when the Hollywood studios would sell a movie to foreign territories on the movie poster before the movie went into production. It is a metaphor for all of life’s endeavors.

The $100 I spent to buy art supplies to paint a Scottish Highland Bull for my wife and then have it framed, because she said she would love for me to paint it for her. I did it in a single night, to her shock, amazement, and great outpouring of appreciation and love and am now waiting anxiously for the framer to deliver the final product to me.

I graduated from Grammarly to MasterWriter and because of it can do the work of three writers with better results. Add Google to the mix and one man can write 18 published books in three years. Proof is in the pudding, because that’s what I’ve done.

Tony Robbin’s Awaken the Giant Within, because at age 60, that’s what you must do if you have not done it already, in your quest to redesign your life.

It’s a trade-off between, “Sometimes it takes a long time to learn how to play like yourself,” by Miles Davis, and “There is no greater agony than bearing an untold story inside you,” by Maya Angelou.

• Always strive to boil down your idea to its essentials before getting started.
• Always know how your idea will eventually make money or have value.
• Always have a crystal-clear vision about the mechanics of how your venture/enterprise will be funded, operated, and successful.
• And always chose to do something you love, because there is no separation between your work as an artist/entrepreneur and your work as a human being.