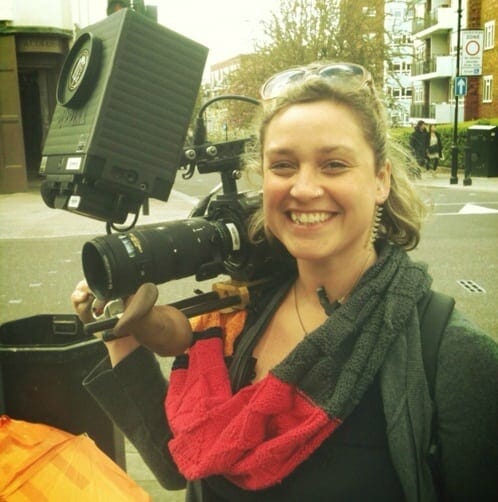 Don’t be afraid to get on the phone and talk to people.

Tamara Groves is a British TV producer living in Brooklyn, New York and the founder of Tamara Groves Productions. As a teen, she was a keen scuba diver and chose to study environmental and coastal conservation at university. For her thesis, she spent several months in South Africa collecting data on great white shark populations before moving to New Zealand for a year after graduating.

During her time in South Africa Tamara was lucky enough to assist with one of National Geographic’s early Critter Cam projects. Always an avid David Attenborough fan, this experience inspired Tamara to consider combining her creative instinct with her passion for the environment by making a career move into television. She started as a production assistant before moving on to research, assistant producing and eventually field producing.

Working in a wide variety of genres over the past 10 years incl. travel, food, antiques and natural history has given her extensive experience in all aspects of film making. In recent years thought she has specialized in culture and travel documentary with a strong culinary influence.

After several short-term projects with a US-based production company, she made the life changing decision to move to New York so she could work with the company on a full-time basis. This move led to spending the past three years on the road traveling and filming with a pool of talented directors and directors of photography. This experience has not only developed her overall understanding of filmmaking in challenging locations but also given her the tools to necessary to move forward into future directing roles.

Where did the idea for Tamara Groves Productions come from?

Working in a predominantly freelance based industry, it is important to set yourself up so people can find you and hire you to work on their projects. It’s a visual industry so you need a website and/or a showreel so that people can see what experience you have and whether you have the skill set they are looking for. Setting up under my own name seemed like the most obvious thing to do and since then I have been working on developing my online presence.

This all depends on what kind of production I am working on and whether its pre-production or out in the field. I usually work in documentary, often shooting abroad so when its pre-production time, I am office based and stuck into lots of research, development meetings and most importantly getting people on the phone so I can get to know them. Finding good on camera personalities is often key to good TV and if they’re 10,000 miles away in a different time zone – you have to get to know them on Skype!

If we’re in the field filming, I don’t have to work to make it productive – it just happens naturally! As a producer, you have to multi-task – not only do you have to make sure everyone is where he or she should be and that everything is set for the next scene or location, but you have to keep everyone fed, watered and able to do his or her job. It sound’s easy but imagine you’re in the thick of a market in Lagos, Nigeria – you have thousands of dollars of equipment, there’s a language barrier, it’s hot and you only have 2 hours to get the scene in the bag before hitting the traffic en route to the next location.

Each production is a team effort but in documentary I think one of the key ingredients is great on camera contributors. Personalities that you would gravitate towards at a party. If you have them and then you add in a talented and creative camera and post team then you’re on to something.

Lists! I write SO many lists. As a producer, you have to juggle so many different aspects of the project and the way I keep on top of everything is to work from my lists. It keeps me focused and helps stop small but vital things from slipping through the net.

I try not to think in those terms. You can only make decisions based on the information you have there and then. So, I don’t think I would do anything differently.

As a Producer, what is the one thing you do over and over and recommend everyone else do?

Don’t be afraid to get on the phone and talk to people. Sometimes when you’re overwhelmed with stuff to do it’s easier to send emails but there are some instances where nothing beats a phone call. Especially when you’re building a project around talent and/or on-screen contributors.