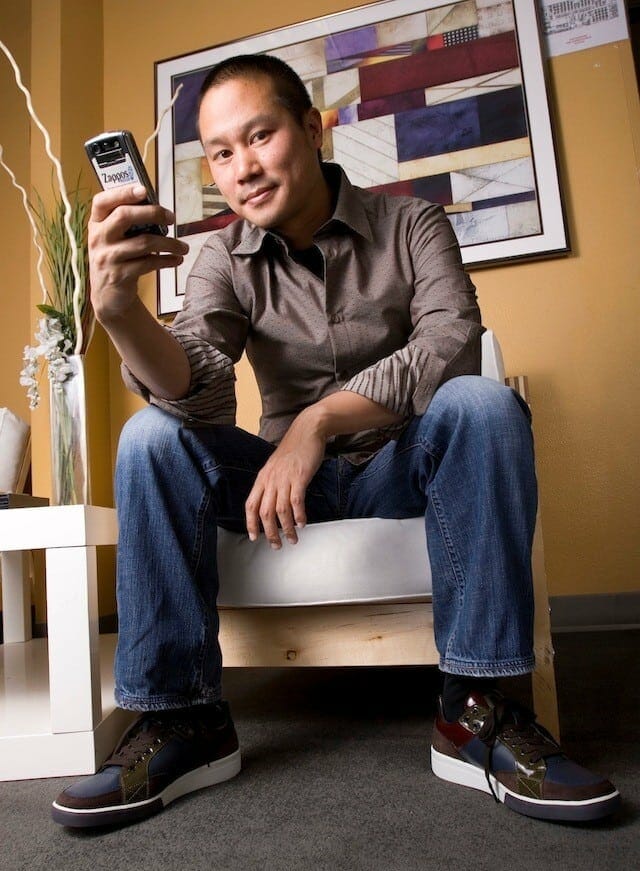 [quote style=”boxed”]I think it’s best to start small and grow slowly, rather than trying to grow as quickly as possible.[/quote]

In 1999, at the age of 24, Tony Hsieh (pronounced Shay) sold LinkExchange, the company he co-founded, to Microsoft for $265 million.

He then joined Zappos as an advisor and investor, and eventually became CEO, where he helped Zappos grow from almost no sales to over $1 billion in gross merchandise sales annually, while simultaneously making the Fortune Magazine annual “Best Companies to Work For” list. In November 2009, Zappos was acquired by Amazon.com in a deal valued at $1.2 billion on the day of closing.

Tony’s first book, Delivering Happiness, was published on June 7, 2010 and outlines his path from starting a worm farm to life at Zappos. Tony shows how a very different kind of corporate culture is a powerful model for achieving success and happiness. Delivering Happiness debuted at #1 on the New York Times Bestseller list and has remained on the list every week since June 2010.

In October of 2011, Tony was interviewed by Barbara Walters when she interviewed self-made entrepreneurs. The piece included a visit to the headquarters of Zappos, which was dubbed, “what might just be the wackiest workplace in America.”

In addition to his responsibilities as CEO of Zappos.com, Tony is leading the “Downtown Project,” a group committed to transforming downtown Las Vegas into the most community-focused large city in the world. This transformation includes the relocation of the Zappos.com offices from Henderson, Nevada to what was the old city hall in downtown Las Vegas.

I am currently working toward developing Downtown Las Vegas and making sure our transition into the area is seamless.

Where did the idea for Zappos come from?

In 1999, Nick Swinmurn, the founder of Zappos, was looking for a pair of shoes in a store that did not have them in his specific size and color preference. He realized selling shoes online basically meant unlimited inventory, so he started Zappos as shoesite.com, and Tony came on board shortly thereafter, first as an investor and then as a CEO.

I don’t really have an “everyday routine,” except that I brush my teeth, shower and check email.

Creativity, optimism and street smarts. In other words, by playing MacGyver, but for business.

A lot of people know us for shoes because that’s how we started. But we are making a big push into clothing this year. Ten years from now, we’re hoping that people don’t even realize we started out selling shoes online. We just want the Zappos brand to be about the best service, which includes free shipping both ways and our 365-day return policy.

I would try to be creative and do whatever I could without raising money from other investors (which is hard anyway in this economy). I think it’s best to start small and grow slowly, rather than trying to grow as quickly as possible.

I would say rather than focusing on what will make you the most money or be the best for your career, figure out what you will be passionate for 10 years and go pursue that.

As a child, I was a boy scout.

Triumph of the City by Edward Glaeser, as this book has influenced our thought process in revitalizing Downtown Las Vegas quite a bit.

How does a company deal with a recession?

I think the true test of a company’s character (or even a person’s character) is how they behave when times are tough. For us, we’ve continued to focus on providing the very best customer service and developing our company culture. My advice to businesses of all sizes is to figure out what you want to stand for (what your core values are) and continue to make decisions based on that.

What are your thoughts on robots?

I think they will take over the world.