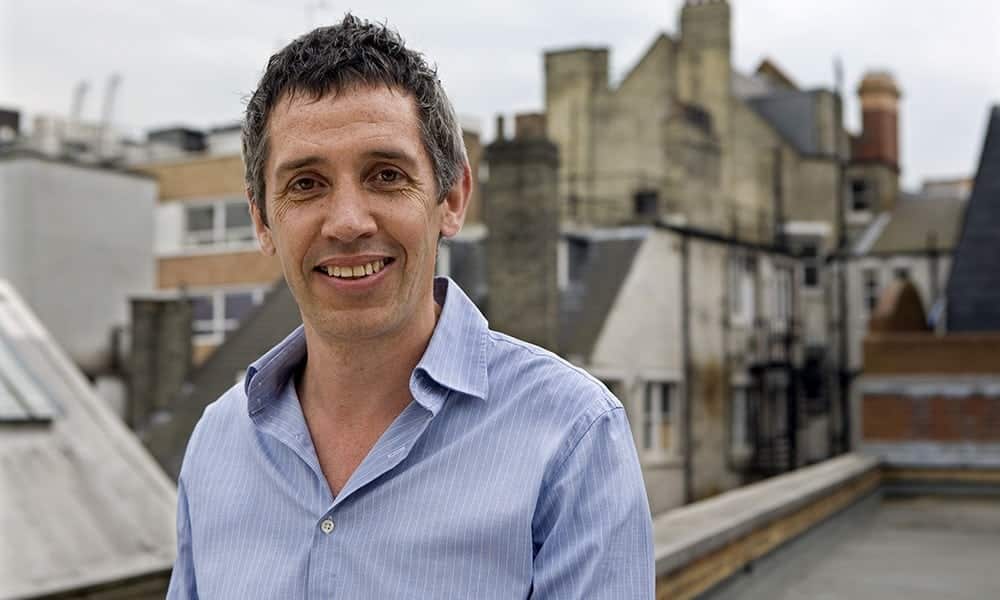 That sense of curiosity helps create opportunities as sometimes you can see links or answers that aren’t obvious to others who have become embedded in their role or organisation.

Trewin Restorick is the Founder of a new start-up charity called Hubbub which aims to revolutionise the way environmental messages are communicated to the general public by bringing people and organisations together as a force for good. He is also Chair of Student Hubs.

Previously Trewin created Global Action Plan the UK’s leading environmental behaviour change charity which he set up in 1993. As CEO Trewin developed award-winning sustainability partnerships with organisations such as BskyB, Barts NHS Trust and EON as well as developing a wide range of successful environmental initiatives in schools and communities. Trewin is a frequent commentator on environmental issues including regular slots in Business Green, Guardian Sustainable Business and Sky News. He has been trained by Al Gore as his climate change ambassadors

Before starting Global Action Plan, Trewin was Director of Fundraising at Friends of the Earth where he created PaperRound London’s leading community recycling business. Prior to Friends of the Earth, Trewin worked in the job creation team at Plymouth City Council and also produced a youth TV programme for the BBC called Something Else.

Where did the idea for Hubbub come from?

Hubbub was born out of a sense of frustration. Scientific evidence on the negative impact of climate change is getting increasingly robust, but the UK public seems either disinterested or actively hostile. On closer examination, we found that very few NGOs in the UK actively communicate to a mass audience about environmental issues in a way that is compelling, positive and fun.

Hubbub takes a fresh approach to communicating environmental issues, focusing on people’s passions such as fashion, food, homes and sport. We avoid doom and gloom lecturing about carbon footprints instead our communications and events are positive, sociable, collaborative and open to all.

What does a typical day look like and how do you make it productive?

Building collaboration and partnership is core to Hubbub’s approach. A typical day is spent seeking to build relationships with organisations who share our aims and exploring ways of working with them to develop new initiatives and solutions.

Core to this approach is a using all forms of social media to tell our story to the wider world. This includes writing blogs, commissioning short videos, extensively using Twitter and Linked In.

For me, a productive day is when most of the time is spent looking externally at what we could be doing. It often feels safer and easier to concentrate on sorting out internal challenges but these can suck the energy and dynamism from the organisation.

Our best ideas always involve a range of elements:

• They build on research designed to discover what behaviours we are aiming to change, who we are trying to reach and what barriers exist preventing behaviour change. This is backed-up by a wider understanding of academic research into behavioural science.
• We try to discuss ideas with as many relevant organisations as possible to get their perspective and input.
• Finally, we use the diverse skills and knowledge within the organisation to consider ideas and create solutions. It is a very fluid process!

The power of new entrants into markets to disrupt the status quo. A great example is Airbnb. What we need to ensure is that as many of these new entrants as possible are driven by a desire to do environmental and social good. Maybe we are on the cusp of a new economic revolution which use resources more efficiently and which is driven by clean technology,

Being inquisitive. I am always intrigued to discover what drives organisations to do certain things and what could be done to move them towards a more sustainable business path. That sense of curiosity helps create opportunities as sometimes you can see links or answers that aren’t obvious to others who have become embedded in their role or organisation.

What was the worst job you ever did and what did you learn from it?

Working the night shift in a bread factory taking small loaves off a conveyor belt as they came out of the oven. It was hot, dangerous and boring. Employees were treated no differently to the machines resulting in high staff turnover and accidents. It made me realise that I would always want to have control over the work I did and would not want to be part of a large faceless organisation.

If you were to start again what would you do differently?

In a sense, I have started again as I set up Hubbub just over a year ago with a clear set of personal rules. These included only working closely with people I liked and respected, being really clear about what we would and wouldn’t do and constantly checking that we hadn’t drifted from the original intention, being transparent about the environmental impact we wished to deliver and communicating these intentions really clearly and finally to constantly explore all forms of communication from physical installations through to social media.

What one strategy has helped you grow your business?

Being collaborative and not being precious about the ownership of ideas. We have grown rapidly because we are partnering with businesses that have a huge reach and resource. We could never have done this on our own. Usually, this means the company branding and owning the projects that we have helped create which can be frustrating – but we have discovered that we get significantly reflected glory for the things we have helped create and, as a result, others come knocking on our door.

What is the one failure you have had as an entrepreneur and how did you overcome it?

I should have left the previous charity I created far earlier than I did. I had got to the point when I was getting frustrated and angry with the way it was evolving. I have come to realise that I have a set of skills that lend themselves to the period of excitement and jeopardy linked to starting something new. These do not translate well into running a more established organisation. I knew deep down this was the case but didn’t have the courage to take the plunge and leave.

What is one business idea that you are willing to give away?

The current fast fashion model is totally unsustainable. We cannot keep on the treadmill of producing ridiculously cheap clothing that people only wear a few times before they get chucked. In time, the model will collapse as the cost of raw material, production and disposal rise. The person who can create an alternative business model that gives people access to great clothing without the connected level of consumption will make a fortune. What we need is the Airbnb equivalent for fashion.

What is the best $100 you spent recently and why?

I got new a new brake cable and brakes for my bicycle. I am an avid cyclist and love the freedom and flexibility a bike provides. Most of my cycling is around the madcap streets of London but even in the city being on a bike provides a form of exercise and distraction from work that is bizarrely relaxing.

What software and web services do you use and what do you love about them?

I have absolutely no idea. There is an entirely new generation who have been brought up with the technologies that now surround us – I leave it to these members of my team to select and use these technologies to the fullest of their potential. My skills are more editorial. I sound like a broken record trying to get the team to keep communication short and snappy, to always consider the audience and to bring their own personality into all they do to create authenticity.

I recently read Winning the Story Wars by Joanah Sachs. It is a great summary of the power of stories and how they can give organisations cut-through in an increasingly noisy and cluttered environment.

I have been privileged to have worked with the environmentalist Jonathon Porritt. I have seen first-hand he has successfully trodden the fine line between sticking to his values and principles whilst at the same time being able to work with influencers within the system. He is passionate and persuasive and has also somehow found time to write books that have swayed the thinking of many.