Yo Sub Kwon – Co-founder at LaunchKey 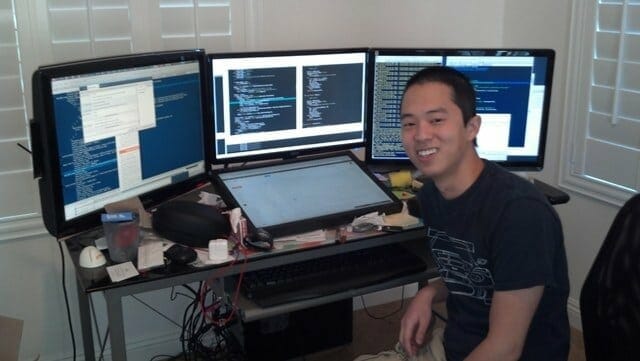 [quote style=”boxed”] I’d say the vast majority of any day is coding and development. We’re in the middle of fund raising so there are a lot of meetings and phone calls as well. It’s basically code, eat, sleep, and run to a meeting when a calendar alert pops up.[/quote]

Yo Sub Kwon partnered with Ryan Mendoza to create the web development company, American Productions, that primarily did album art, apparel designs, and web sites for bands across the country. The company was disbanded when Yo entered college in 2005. He did freelance web development for small businesses during that time.

Yo Sub Kwon attended Virginia Tech for 3 years pursuing a degree in Computer Science and dropped out before his senior year to become a professional poker player. Over the two years following he played several million online hands of poker along with many live games at the World Series of Poker in Las Vegas and had over $500k winnings in 2009 alone. He quit after that year to develop online poker software and ended up teaming up with Robert Croak to start Advanced Poker Tech. He also co-founded the startup Shirtsbyme building all the technology and using Robert’s resources.

Online poker stopped in the US and Yo Sub changed focus becoming the CTO of Verso Group and building out the technology division of the company. He oversaw all major technical operations, over 50 websites, and building the infrastructure for new sites. He organized the use of version control, continuous integration, project management, and a cloud hosting platform to handle scaling for millions of users. In May 2012 he left Verso Group to become CTO of Ticketometer and soon after co-founded LaunchKey with Devin Egan and Geoff Sanders.

A company called LaunchKey. We provide a passwordless method of authentication. It takes the authentication layer off of the web and puts it onto your device.

Where did the idea for LaunchKey come from?

The company started at a Las Vegas Startup Weekend in July. We all hate passwords, remembering them for all the different sites we use, worrying about sites being hacked and them being leaked, typing in annoying codes for 2-factor. We decided passwords were the problem and we should eliminate them.

I’d say the vast majority of any day is coding and development. We were fund raising so there were a lot of meetings and phone calls. It was basically code, eat, sleep, and run to a meeting when a calendar alert pops up. Now there’s a lot of the initiatory tasks that need to be taken care of when starting a business from getting an office and employees to handling all the legalities.

The great thing about being a developer is you can just start building something. I have a fairly obsessive personality so usually an all-nighter and caffeine sparks the birth of many new projects.

Data analysis with the power of cloud computing. Being able to leverage cloud resources anybody can affordably use data training tools and create useful predictions.

I’ve only really ever had one job that could be considered normal employment as the CTO of Verso Group. I learned an immense amount about business all around. How to form companies, how to hire employees, how to better organize and lead those employees, business relationships, how difficult fund raising is, and that would be just scratching the surface.

I would set very defined stop losses or quantifiable metrics that I would require be hit to continue on with projects. If I didn’t hit those marks I would immediately cut my losses and move onto whatever is next.

Keep moving. One thing everyone should quickly notice is that there is always something to do. If you’re ever bored or have free time you could be advancing something.

There aren’t enough hours in the day. I’ve altered a lot of the way I live my life to increase the amount of effective hours I get. This would include sleeping more efficiently, combining efforts when possible, booking the minimum amount of travel and working close to home. In the end you really just have to accept that you’re only able to work so much at maximum effectiveness and find the balance.

If I gained a nickel for every business idea I have… uh oh a new business idea is forming. Anyway, I think a countdown app with a trigger would be pretty nifty. An example use would be setting a month long countdown that resets when a pin is entered and the user would type that pin in before it hits 0. If it gets to 0 the user is considered incapacitated and emails are sent out (the trigger) which could include passwords, photos, a letter or even a will. Another useful trigger for that would be something that open sources certain projects in the event a countdown hits 0. You’re dead and it doesn’t matter or you’ve forgotten about the project and it might as well be open. This would be especially true if your countdown resets when you make a commit.

Food for everyone. Accumulate massive wealth. Build permaculture farms. Figure something out from there.

I can’t think of anything that I feel would qualify as a secret and I’m still willing to tell.

Google; Github; Wikipedia. I use Google to find things I’m looking for. There’s just an immense amount of great things on Github and it’s also nice to use. Wikipedia is baffling at what an incredible resource it is.

My real recommendation would be: don’t read books, chances are you’re wasting your time. If I have to give a book I would say, “The Owner’s Manual for The Brain” because I feel better understanding how your brain works can only improve how you use it.

@launchkeyapp to hear our progress and about how we’re changing the world
@mcuban Business pro
@elonmusk SpaceX and Tesla updates!

A couple hours ago. Someone asked me if the blu-ray player could play DVDs. I for some reason found the question amusing enough to laugh.

Are there skills you believe are common among all successful entrepreneurs?

Arguably there’s often a bit of luck and timing between a success and a failure, but persistence will give you more shots at success. Adaptability to handle the current situation and adjust while the company changes. Being able to think critically about how to tackle new hurdles that arise or learning from the results of how the last ones were handled. I believe these are qualities that make up most successful entrepreneurs.

Why are you an entrepreneur?

I’ve never liked the idea of having a boss. All I care about is being able to work on the projects I think are interesting with people that I enjoy working with. Working on startups completely fits the high variance lifestyle I get a kick out of and always keeps a steady stream of pressure to keep learning, improving, and building.