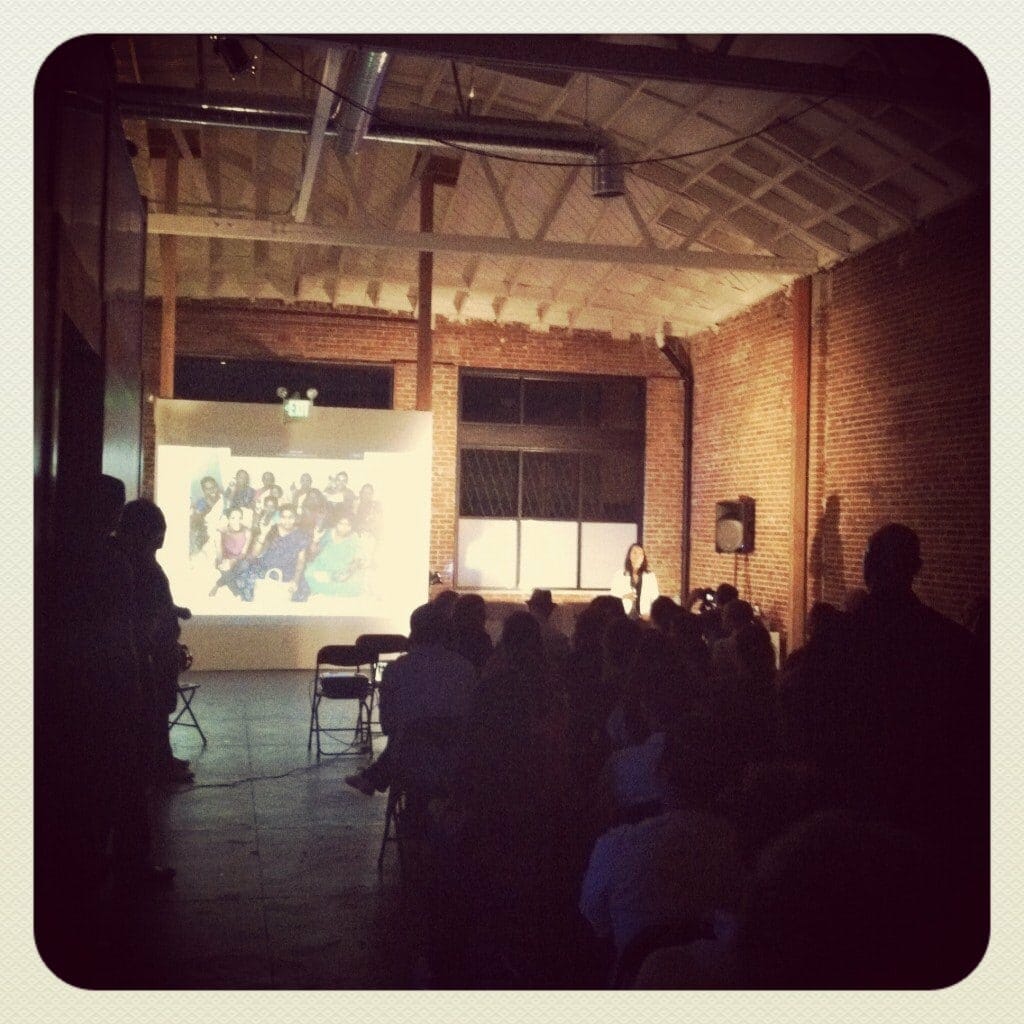 Our first five events are in the can–Los Angeles, San Francisco, Portland, Seattle and Missoula. We’re about 2,000 miles into this trip and now we’re in Idaho, on our way to Utah.

To say that these first couple of weeks have been incredible would be an understatement. We pretty much had full houses wherever we went. Our speakers were incredible, our audiences rocked and the support we received has truly moved all of us. I spent months telling people that our goal was to inspire people. Well, it turns out, we’re the ones inspired.

That being said, and more about this later, in these next two weeks we will face some of our biggest challenges of this tour. But first, let me talk about it what has happened so far.

For updates and all, please follow us at im48.co.

Our first event. Our kickoff. A home game. To date, LA probably was our biggest event, with around 150 people. The event was held at an ad agency called Seso, and the speakers ranged from the co-creator of HowToBeADad.com to the founder of Inventure. Emotionally this was a hard event to me, as I felt caught between the comforts of my old corporate life and my new life as an entrepreneur. Doubt was definitely on my mind, and I felt a huge relief when our little red Element finally rolled out of town. I also had to say goodbye to my cat Otto, which made me ridiculously sad. Many friends showed up to the event, which meant a lot to me.

People Without Whom We Couldn’t Have Done This

Coming into this tour, this was probably the event that scared me the most. There is no shortage of resources for entrepreneurs in San Francisco, there are tons of other events, our message is sort of anti-Silicon Valley, and it didn’t help that our event was the day after Fourth of July. And I didn’t get full confirmation from our speakers until pretty much the last second. Yet, San Francisco turned out to be an amazing event. All speakers showed up, including Sarah Lacy of PandoDaily, and Philip Rosedale, the founder of Second Life. Everyone gave amazing talks. The audience was super engaged. This event was a big boost of confidence for us. We did stay in a Travelodge in the Tenderloin, which is something I definitely wouldn’t recommend.

We drove up to Portland the Friday after our event and stayed with my good friend Kristie. She has a big house on the east side, which she pretty much completely offered up to us. We cooked dinners together every night, drank a lot of fairly cheap wine, went to the Blues Festival and got to have a typical Portland summer weekend. It was awesome, and made me realize how badly I want to live there again. Adam is turning out to be quite the chef, as he must have cooked a half a dozen meals for us. The kid amazes me.

Our event was held at a digital agency called Instrument. Their office was truly spectacular and I can’t imagine that we’ll have an event in a more impressive space. Portland turned out to be a big event, and close to 150 people showed up. Our speakers did great, but there were a few mistakes on my part. Five speakers are really too many for our events, as it requires us to take a break, which really puts a damper on the energy in the room. Still, the event was awesome, the venue was spectacular and it felt really good to be in Portland. I think we all loved it, and it was a good team-building weekend.

In terms of team dynamics (and you’ll have to watch the movie for the full scoop), here is my take:

Adam is like an energizer bunny. The kid gets up in the morning, itching to start cold calling. He’s also a good cook, a charmer with the ladies, and someone who pretty much spreads nothing but positive energy.

Adam and Will made a bet about who could gain the most LinkedIn connections on this trip. Will would literally spend a couple of hours after every event, emailing people he met at the event. Adam did the same thing, and then he figured out how to export the email addresses out of our ticketing platform to then mass invite them to be LinkedIn connections.

If Adam is our energizer bunny, Will is our rock. Nothing freaks him out. He only does one thing at a time and can pretty much tackle any problem we throw at him. Everyone likes and talks to Will, and we’re lucky to have him.

Kelley is our filmmaker. He’s a real artist. The work he’s producing is truly incredible. But I think Kelley was getting a little antsy without his bicycle, so we picked it up in Montana. There’s plenty of space on/in/under our Element.

As for me, I am the nervous boss. I wake up every morning at 4:00 a.m., worried about something. That comes with the territory of being a first-time entrepreneur, which I knew awaited me. I guess I didn’t have to choose to organize 50 events across 48 states in 115 days as my first “product.” Oh well, I am an entrepreneur now.

I am also about 300 emails behind, but I’m catching up. Thanks for all the help and I promise to get back to everyone. Keep helping us.

We headed up to Seattle a day before the event. It was a nerve-wracking trip, because our Seattle speaker, Rand Fishkin, kept crashing our website by Tweeting about the event. I guess some would call that a good problem to have. Still, I didn’t enjoy it, so a day later we completed the move to our new hosting company, WPEngine. More on that later, but I can tell you that it feels good to not have hosting IdeaMensch be one of those things that keeps me up at night. In Seattle we stayed with one of my best friends, Jerry. We barbecued, drank gallons of his premium Keurig coffee thingies, and watched Kelley and Will severly struggle with their cat allergies.

Anyways, more about the event.

We held it at a space called SURF Incubator, which is this incredible new resource/co-working space for entrepreneurs in Seattle. Their CEO, Seaton, got us access to this awesome, big, wide-open space with huge windows. It was incredible. Unfortunately, it also didn’t have AC or curtains, which, when combined with the fact that it was the hottest (and brightest) day of the year in Seattle, turned our event conditions into what I’d call sauna-like. During the event, we literally had to go and buy industrial fans from Home Depot, which we returned the next morning. You also couldn’t see any of the presentation content, as the room was too bright. The conditions were grueling, yet our speakers were amazing. Molly Moon talked about starting her ice cream shop, out of all possible subjects, which was rather cruel for the audience. The night ended with a little after-party at SURF.

We drove to Missoula on Thursday morning, where we stayed with Russ and Alexis Fletcher. They were incredible hosts. Russ set us up in his garage/home office, which was bigger and more luxurious than any place I’ve ever lived. It was awesome. They cooked us breakfast every morning, kept us caffeinated all day long, and even hosted a party that lasted until 2:30 in the morning (5:00 a.m. for Adam and Will) after our event.

In terms of the event, it was our best one yet.

We did something different this time. Because of my connection to Missoula, and especially the University, I decided to give away a large number of tickets. We had sold a fair amount of tickets already, and a few people had bought our “Pay-It-Forward” sponsorships which gave us the freedom to give away more tickets. Anyways, it turned out to be a smart decision. We had the event at a place called the Missoula Winery, and pretty much had a full house–on a Friday night. It was incredible.

So were the speakers. We only had four speakers at this event, which was the right number. What made their talks different than past ones was that each got very personal about their struggles and lessons as entrepreneurs. The talks really hit home with our audience. Not a single person left early. Actually, it seemed like the room kept getting more and more packed.

I really think there’s something brewing from an entrepreneurial perspective in Missoula. There is so much energy, a growing number of resources, and many many people who truly care about creating something special in Missoula. We felt that energy.

Now, a word about generosity. At the end of the event, I offered to refund those who paid for their tickets. It only seemed fair, as I felt bad that some people paid and others didn’t.

Not a single person asked for their money back, and people actually came up to me and handed me cash–amounts ranging from the price of a ticket to a “Pay It Forward” sponsorship. We also picked up a beer sponsor. Thank you, Big Sky Brewing.

A couple of weeks into this journey, we have generated a few thousand dollars in net income. We had a lot of really generous sponsors in the bigger cities, which made this possible. This buffer will be important in the weeks ahead. In case you’re curious, here is how the math works.

I think the next two weeks might be the hardest ones.

Today we have our Boise event, which is going to be good. Boise has been incredibly supportive.

Wednesday, we’re in Salt Lake City, and that’s going to be a tough one. Wherever we have gone, and whomever we have called, people have welcomed us with open arms. While some people have been helpful in getting us situated, many folks literally hung up the phone on Adam when they heard the word, “IdeaMensch.” I am not sure why that is, but I am hopeful that we’ll be able to create some momentum in the coming days.

On Friday we’ll be in Cheyenne. It happens to be Frontier Days, so we are going to do a slightly tweaked version of our event in more of a meetup style. But we’ll be going to Frontier Days to try and capture the entrepreneurial spirit of Wyoming.

Boulder should be a great event. Then we’re off to Tulsa and Wichita.

Thanks for all your help. Please follow us at http://im48.co/.