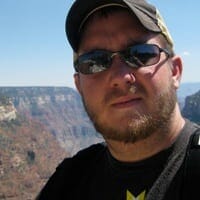 Aaron Presley founded EasiestGive, a website that allows its customers to donate needed products to homeless shelters in their area without leaving the computer. He is a self-proclaimed nomadic Web developer who works from coffee shops and dreams of living out of his car one day. When he’s not working on EasiestGive, you would likely find him reading at a park or smoking cigars around a campfire.

At any moment I have at least three projects rolling around my head, but right now I’m getting ready to release a pretty significant update to EasiestGive. Along with some streamlined code and better page layout, it will allow any organization — not just homeless shelters — to receive products ordered through EasiestGive. This will allow any church, school or other organization to offer their would-be donors the ability to give to the cause online without having to leave their sofa.

The Green Movement. I love this trend not only because it could reduce carbon emissions, but because now, more than ever, people are aware that the things they do can make a significant impact on those around them. This applies to both good and bad things. The more we can get people (myself included) to focus on someone other than themselves, the better we are as a whole.

Small Businesses. I really love the entrepreneurial attitude that is creeping its way through our society. Instead of flocking to the “big guys” for solutions to our problems, we are taking a step back and deciding to do something ourselves. This kind of mindset is infectious and has the potential to impact all of our futures.

API’s. It’s pretty rare for any service worth its salt not to have an Application Programming Interface (API). A company like Twitter started as just a simple concept, but releasing an API allowed their service to be ported to countless other platforms (mobile devices, etc). I’m very excited to see this trend catching on with other services and the innovative products that will follow.

This one is easy — by starting. Great ideas aren’t hard to come by, but what takes work is implementation. Starting is by no means all it takes. After that come the long hours, the late nights and a lot of trial and error. Talking, however, gets you nowhere. Step one is rolling up your sleeves and digging in.

Time away from my computer (and phone). If I’m in a slump, or stuck on a problem, I turn off my phone and go outside. A walk around the park, or a nice cup of coffee, is a great reminder that it’s not the end of the world. The sun will rise, the wind will blow and I have no say in the matter. It’s a great way to clear my head, which is usually step one of attacking a problem.

Thinking that I don’t need anyone else’s help. When developing EasiestGive, I was fortunate to have Jacob Morse (@JacobMorse) with me the whole way. Not only did he do great design work, but he was a huge source of encouragement throughout the entire process. Anytime I started to lull, or doubt my idea, Jacob was right there reminding me that he believed in the idea and urged me to keep going. Having a partner in crime was invaluable.

One word: teleporters. Why don’t they exist?!

What is one book and one tool  that helps you bring ideas to life?

“Founders at Work” by Jessica Livingston — This was a huge motivator for me. It was so great to be able to read how prominent companies had such humble beginnings. There were a lot of things in that book that made me think, “That sounds just like me!”

Google Calendar — I am absolutely horrible at thinking of more than one thing at a time. It doesn’t matter if I verbally agree to meet you here, or to get this done at that time. If it’s not in my calendar, it won’t get done. That includes time set aside to work on development projects.

I would love to see Merlin Mann interviewed. Not only do I have a pretty big man-crush on him, but he always seems to have something great to say.

What were you doing before EasiestGive?

I worked as a Web developer for a company in Dallas. It was the best possible corporate experience I could have ever asked for, but it was still the corporate experience. I turned in my notice with the intent to begin traveling immediately, but then came the idea of EasiestGive, and I’ve been doing that ever since. Being my own boss has been the best and most stressful thing I could have done, and I don’t think I’ll ever be able to go back.

Are you related to Elvis?

I get this all the time, and I think I’m going to leave it unanswered. I will tell you that, yes, I know that his middle name was Aaron and no, I wasn’t named after him. I was named after my father who might or might not have been named after The King.