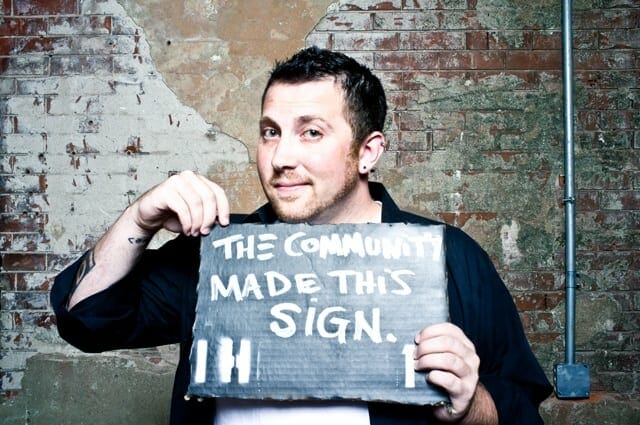 [quote style=”boxed”]My personal credo, which is literally tattooed on my right forearm, is “JFDI” : Just f***ing do it.[/quote]

Alex Hillman starts things: businesses, conversations, parties—and, once in a while, a revolution.

Hillman is best known for starting Philadelphia’s Indy Hall coworking community in 2006, years before coworking became a darling of the mainstream press and workers around the globe. Since then, Indy Hall and Hillman’s work have been featured in national and international publications. He’s a well respected coach and instructor for other aspiring community builders and coworking catalysts. Many credit Hillman with their starts, citing his non-nonsense credo, “JFDI” (“Just f***ing do it”), as a source of inspiration to stop with the excuses and, well, JFDI.

He teaches the Community Builders Masterclass, an intensive program to help people develop professional community-building skills. He is also the co-founder of DynamicWear, which enables its customers to easily sell t-shirts on their own store, alongside their own items, without worrying about the complications and costs associated with managing your own t-shirt inventory.

1.  Indy Hall itself. On June 1st, we executed our largest expansion effort to date, and we’re having a great time managing the accelerated growth of the community. Internally, we’re very strong, so much of my own focus is external: what kind of impact can Indy Hall have on people who haven’t already walked in the door?

2.  Community Builders Masterclass. I’ve learned a ton in the last six years about community building and management, especially when it gets wrapped up in a business like a coworking space, a developer community, etc. I get a lot of questions, which I love answering, but I realized that a lot of the questions got the default answer of “Build up your community!” And when I thought about it, I realized that meant very little to most people. The masterclass takes a good, hard look at the organic process of community building and teaches you a specific set of skills, in a very specific order, and the result is a really interesting hybrid of “process” and “emergence.” Most exciting, we know this process works because it’s what we’ve been doing every day for the last six years.

3.  DynamicWear. This one’s a bit of a curveball compared to the others, but my background is in technology, not sociology or anthropology. DynamicWear is an API for t-shirt printing and fulfillment with no inventory or upfront costs. (Think AWS for t-shirts, but dead simple.) We’re currently in private beta, but it’s been going really well. We’ll launch to the public later this fall/winter.

Where did the idea for Indy Hall come from?

Indy Hall was never about space; it was all about making it easier to find other like-minded people in my city. Six years later, we’ve added almost 10,000  square feet of space, but it’s still all about finding people.

I wish I could remember! Truthfully, I love chaos and change. One of the elements of Indy Hall that many of our members love (myself included) is that every day is different.

If I’m in Philadelphia, I’m usually at Indy Hall unless I’m out at an event or a meeting. It’s my clubhouse, it’s where I like to hang out and it’s where I’m most productive.

It’s not uncommon to wake up in another city, though, either at a conference or to work with another coworking space. I really do love the variation.

That said, I try not to do any meetings before 10:00 a.m. and love going out after a workday to explore food and drinks in whatever city I happen to be in.

My personal credo, which is literally tattooed on my right forearm, is “JFDI” : Just f***ing do it.

There’s always something you know you should be doing, but you aren’t. Fighting through that resistance and doing it anyway, even if its hard or scary, is the only way I’ve found to consistently create great stuff.

Privatized space exploration. Space-X and Virgin Galactic realizing their goals within my lifetime is a very real possibility, and that’s insanely cool. Musk and Branson are two of my favorite entrepreneurs as well, so either one doing it “first” is going to be a win for our planet.

One job in particular that changed my life was at a company whose CEO valued culture in a truly remarkable way. I was there as the company grew to more than two times its size, and that culture started to crumble. He stepped down; I ended up leaving.

In retrospect, I learned a lot about how important culture is to a group of people sticking together to get things done and drew a lot of inspiration from the good parts of that experience for Indy Hall.

I’d work less. I have a tendency to immerse myself in work because I enjoy it, which has certainly paid off, but it took me a long time to remember how to take time for myself. I’ve gotten much better at this in recent years, and the balance is always improving.

Listen. A lot of entrepreneurs hear but don’t listen.

Actually listening, and synthesizing what you hear, takes practice. If you actually do it, a lot of things change for the better.

I take on too much and don’t trust to delegate.

By focusing on building trust with the people I collaborate with, delegation gets a lot easier for me. Better work is done all around.

Trust is so important. I can’t work with people I don’t trust.

My personal mission is to fill the world with better collaborators. Most people suck at collaborating. If more people could work together, there’s no end to the problems that could be more effectively solved.

I wanted to be a professional magician until I was 13.

What are your favorite online tools or resources, and what do you love about them?

1.  Dropbox – Straight up, I don’t know how I lived without Dropbox.

2.  Hackpad – This has done for my writing what Github did for my coding. Unbelievably great tool.

The Power of Habit. This book changed the way I look at everything I do—and everything other people do. I use the stuff I learned in it every single day. It’s also a fun read.

1.  Amy Hoy – She’s a breath of fresh air in terms of practical entrepreneurial advice, is one of my closest friends and is hilarious and inappropriate.

2.  Startup L Jackson – He’s hilarious and inappropriate in a different way than Amy.

3.  Jennifer Pahlka – She’s the founder of Code for America and has an amazing point of view on technology and citizenship. She does amazing stuff with cool people and is smart as shit.

I was talking to Amy Hoy the other day about building a course to teach people how to build online courses—a “course course,” if you will.

If I only get one, I have to say Richard Branson.

How did you make your first dollar?

I didn’t get an allowance, so if I wanted money, I had to find a way to make it on my own. My first dollar was selling “hand-painted door stops”—a.k.a. rocks in front of my dad’s home office to his clients.

I’m a competitive karaoke performer, and I love snowboarding.