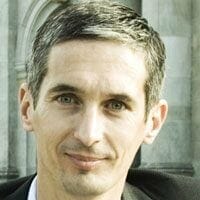 [quote style=”boxed”]In my experience, what distinguishes a successful idea from an unsuccessful one is most often not the actual idea in question but rather the nature of the execution.[/quote]

As SponsorPay’s CEO, Andreas Bodczek is in charge of the overall evolution of the company, in particular finance and advertiser relations. He has steered the growth of the company from an ambitious idea in May 2009 to a dominant offer-based payments platform just two years later with offices in four countries and operations all over the world. Andreas’ goal is to extend SponsorPay’s European market leadership to new geographies as well explore emerging platforms.

In his previous role as CEO of Telefónica Deutschland, Andreas was responsible for the German fixed net operations of the Spanish telecoms group. He led the development of the company’s nationwide wholesale and B2B broadband business as well as the post-merger integration with O2 Germany. Before becoming Managing Director, Andreas held sales and finance executive roles in Telefónica’s German and UK subsidiaries. He started his career in 1999 as a member of Bertelsmann’s Junior Management Programme.

Andreas Bodczek earned an MBA from the Munich School of Management. In his spare time, he enjoys spending time with his family, mountaineering and skiing.

I’m currently actively involved in helping our business development team evaluate opportunities for geographic expansion outside Europe and the US, specifically certain countries in Asia and South America.

I’m also driving the extension of our services onto mobile devices – an area I’m personally very interested in, given my background in telecoms.

My day typically starts with an early morning battle to get my kids ready in time for kindergarten.

Once I’m at work, the first half of the day is spent in meetings with the team and tackling my inbox. After lunch, I’m usually involved with client facing activities and presentations.

On a good day, I’m home in time for dinner and spend the rest of the evening with my family. On those other days, I spend the evening on the phone with our team in San Francisco.

– Ubiquity of mobile Internet: The fast changing behavioral patterns of users as consumption moves from desktop to mobile devices and consequent opportunities for innovation.

– Future of mobile and location-based services: The rapid evolution of mobile technology leading to targeted delivery of content and advertising (as described above) as well as newer and better forms of e-commerce.

In two words – structured execution … assuming, of course, the idea is worth bringing to life.

In my experience, what distinguishes a successful idea from an unsuccessful one is most often not the actual idea in question but rather the nature of the execution.

For example, once we decide to pursue an idea at SponsorPay, we try to keep the initial project task force small in order to rapidly build momentum while also maintaining agility. It is later rolled out in stages to the larger team.

I’m inspired by my conversations with my colleagues and others I meet that are a constant source of refreshing perspectives, different opinions and interesting ideas. Every new day brings new opportunities to improve on the present.

One thing I’ve learned with time is the importance of a good team – one that’s completely aligned with the goals of the organization.

Early on, I was sometimes hesitant to take some of these tough people decisions. However, I’ve since realized that while it is important to invest time and effort in ensuring everyone is on the same page, there comes a time when you might recognize that a certain level of input is not yielding commensurate output from an individual. At that point, it is imperative to take the difficult decision to cut the cord. Choosing to ignore this reality – if it occurs – can be damaging and impede the performance of the rest of the team.

The usual suspects – TechCrunch, eMarketer, Inside Network and others – to stay in sync with developments within the industry; Spiegel Online and The Economist to also keep abreast of happenings outside our microcosmic ecosystem.

“Good to Great: Why Some Companies Make the Leap… and Others Don’t” by Jim Collins – an old favorite that is not only worth a read but possibly even a reread. While some the details might be outdated by now, the fundamentals advocated are evergreen.

I’m quite taken by touchscreen enabled mobile devices – in my case, currently an iPad. However, I think there’s a long way to go before the prolific world of mobile apps actually start delivering on their promise of adding value and/or making our lives easier. Right now, the environment is still too noisy and the functionality is largely superficial.

How do you evaluate opportunities, especially for a business as young as the one you’re currently leading?

Our evaluation process is quite an eclectic mix of organized analysis and impulsive gut feel. The company is no longer the six-person startup it was two years ago and so there is (thankfully!) a lot more method to the madness now. However, we’re in a market that’s evolving faster than anybody can keep track, making it impossible to conduct academic diagnosis regarding every opportunity – many decisions are also based, in part, on instinct.