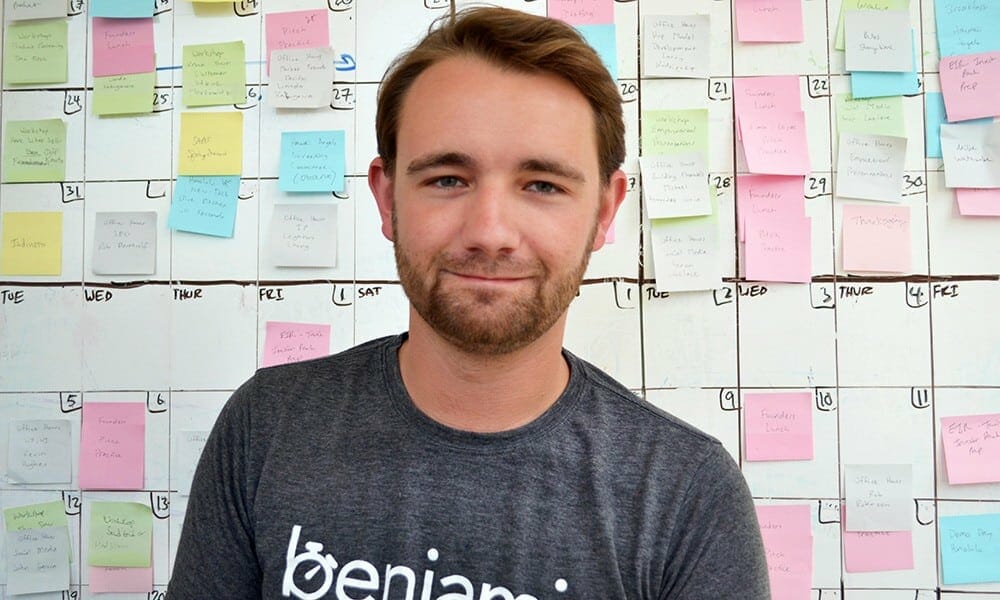 The only bad job is one in which you stop learning. I’ve truly been fortunate in that I’ve learned something from every job I’ve had.

Andrew J. Chapin is the founder of benjamin, an e-commerce flash deals app that forces you to make a purchase decision in 60 seconds or less. In a space that’s thick with competition from contenders like Groupon and Living Social, benjamin in five months has grown to 30,000 active daily users.

Chapin founded the benja network in mid-2014 after a series of frustrating experiences with other deal platforms. From there, he developed benjamin, a mobile application that gives the users two things: deals on the products they love and 60 seconds to buy or pass. Andrew’s business development experience comes from companies large and small, including Microsoft, Color Labs, and Feathr. He loves the Boston Red Sox and skiing.

Where did the idea for benjamin come from?

Truthfully, the idea came when Snapchat reportedly turned down an acquisition offer from Facebook for $3 billion. I, like many, was surprised that they had done so; I figured that they must have a killer monetization plan and that running e-commerce over their ephemeral content delivery platform was it.

I was positive that within a few days, I would open TechCrunch and see this plan laid out. Days, weeks, and months passed. After about six months, my internal dialogue went from “Why isn’t Snapchat doing this?” to “Why isn’t anyone doing this?” It felt obvious.

I was wrong, of course — this wasn’t what they were up to. I gladly grabbed the opportunity.

I use a dedicated sprints system. I’ll lay out several two-hour sprints throughout the day depending on needs: e-mails, fundraising, customer support, recruiting, long-term product work, that sort of thing. I’ll hit each sprint hard for two hours before cutting it off and moving on to the next task. This requires some discipline, focus, and the right set of tools. Inbox by Google’s beta allows for snoozing e-mails — that has been a huge productivity tool for me.

My interest in personalization is certainly reflected in what we’ve built with the benjamin mobile app, but what’s really exciting is the next step: artificial intelligence. I think the advancements in this area will have a greater impact than anything else in the next 15 years.

The only bad job is one in which you stop learning. I’ve truly been fortunate in that I’ve learned something from every job I’ve had.

Wake up every morning.

One unique thing we’ve done is involve ourselves in as many startup markets as possible.

We started the company in Boston but have spent periods of time working in places like Las Vegas, St. Louis, Honolulu, and, most recently, Silicon Valley. This experience has been great for the team’s creative juices, and it has cultivated a geographically diverse roster of partners, investors, advisers, and friends who have been a huge piece of our growth story so far.

There are obvious reasons for this: When we launch a product, we’ve got a large and mixed group to contact. It also means we’ve got funding sources to lean on that aren’t subject to the ebbs and flows of one particular market. Our advisers come from all over; this has been a huge win for us.

My biggest challenges and failures thus far have been in hiring; I can’t say that I’ve overcome it. What I’ve learned is that there are plenty of people who are qualified for a given job, but there are few people crazy enough to be successful in the startup environment. Company culture adds another layer of difficulty to this. It’s something I spend a lot of time thinking about, and I can only hope that someday I’ll overcome it.

There’s a lot of controversy and drama right now in the ad tech space as it relates to ad blockers. Naturally, content publishers and bloggers feel they should receive some compensation for their hard work. Naturally, users don’t enjoy a web-browsing experience when it’s covered in spammy advertisements.

That said, it’s hard for me to understand how a software company or extension creator feels it’s appropriate to insert itself in the middle of a transaction between advertisers and content publishers. This is especially true because the party impacted most is the content publisher — people who are writing about their passions and, sometimes, realizing lifelong dreams in doing so.

When I ask ad block users about this, they generally shrug and figure that they, as one individual, can’t possibly be making an impact on the publisher’s bottom line. These numbers add up quick.

Many users express that they’re using ad blockers only to block the really bad spammy advertisements, not to take money out of their favorite blogger’s pockets. They also express that they would be happy to pay for the content, but these small, independent publishers don’t have the bandwidth to build up their own paywalls.

I think there’s a lot of money to be made with a WordPress plugin (or similar overlay) that allows users to choose whether they would like the free version (with ads) or a premium version (with no ads) of their blog/website. This company would provide the code, payment processing, account management, and other services that bloggers don’t have time for.

I wish this existed. It would solve a huge problem.

Inbox by Google has a few features that really drive productivity. Slack and Dropbox are mission-critical for team coordination, especially because I’m on the road as much as I am.

I read a book a few weeks ago that I can’t seem to shake; I keep referencing it in conversation and thinking about it: “Hatching Twitter” by Nick Bilton.

There’s a line about a piece of decor in the early Twitter offices that I love: “The piece of art was in a black frame with a white border. In a bit of irony, it had been hung upside down. And in bold white letters on a dark background, it made a statement: ‘Let’s make better mistakes tomorrow.’”