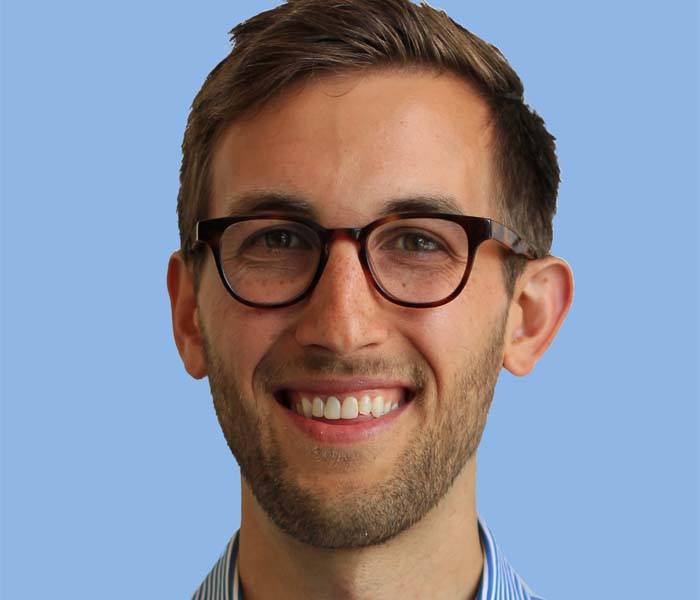 I start each morning with walk with my wife Robin and dog Winston.

Andrew Haller is the co-founder and co-CEO of AirDev, a San Francisco based startup disruptor that designs and develops custom software for websites and mobile apps.

AirDev is disrupting the coding industry by using a new DIY technology called Bubble. This new technology allows AirDev to hire employees who have no coding experience over costly coding professionals, passing the savings onto its clients. And by hiring people with no prior code skills, AirDev’s process also solves the coding talent crunch shortage. Finally, by using Bubble, AirDev can build web apps in five days, faster than its competitors.

Haller, 31, is originally from Chicago. He graduated from Stanford University and the Harvard Business School. He and his wife Robin live in San Francisco.

Where did the idea for AirDev come from?

AirDev came about by accident. My cofounder Vlad Leytus and I had no previous coding experience, and were not looking to get into the software development space. We met in business school, where we were both pursuing different startup concepts. We each needed to build a complex web product to attract initial users (mine was a crowdfunding concert platform, Vlad’s was a sharing-based marketplace). We looked into recruiting undergrad computer science majors, hiring overseas freelancers, recruiting a technical cofounder, but to no avail. One day I happened upon a new tool called Bubble, which claimed to allow people without coding experience to build complex web apps. I was too ignorant to be skeptical, and ended up spending that entire summer learning the tool and building the first version of my app (rippleconcerts.com). I told Vlad about the tool, he learned it too, and pretty soon we realized we could build very sophisticated software in a fraction of the time it took conventional coders. It was through this experience that our vision for the future of software development began to take form, and we incorporated shortly thereafter.

I start each morning with walk with my wife Robin and dog Winston. Even if it has been a long night, the walk helps ground my day. My next phase is at the office, where I spend my time running (often literally) between client calls, strategy discussions, app troubleshooting, and other daily tasks. I stack all of these in-person and short-term meetings and tasks during the day to keep balls rolling. I typically leave the office on the early side to get back to my afternoon dog walk, which marks the divide between my hectic day and an evening where I can get solitary work done. When I return home, I have several longer periods of uninterrupted time where I can tackle larger tasks and long-term projects. This balance helps me to stay productive and avoid floundering in the many demands of running a startup.

AirDev’s business is bringing our clients’ ideas to life through the medium of web and mobile applications, so this is a topic I am very passionate about. Though we can build apps faster than traditional developers, the real value we add is in understanding and enhancing a client’s concept as we translate it from their mind into a concrete app scope. We pride ourselves on identifying the key elements of the hypothesis our client is trying to test, the core features required to accomplish this, and the way to design an app efficiently to meet the needs. This unique blend of strategic guidance and technical engineering is our craft.

With the emergence of platforms enabling people without technical backgrounds to build websites — Bubble to Squarespace and Wix to Shopify — we are very excited about what this trend means for entrepreneurship. To date, every founding team needs to have at least one member who can code, but this talent is often wasted building technology that has already been created hundreds of times before in different settings, like marketplaces, CRMs, or social media platforms. Moving forward, tools like Bubble (and companies like ours that build on them) will enable a new wave of non-technical founders to build large technology companies to solve really important problems.

I am not a morning person, so I really hate having work looming when I wake up. This forces me to complete my work before turning in at night, so I can have a restful sleep. Having this forcing mechanism leads me to become increasingly productive as the night wears on. I do much of my best work (including this response) just before bed.

I spent a summer teaching tennis lessons for kids at a country club. I have a distinct memory of a private lesson I gave to a kid who could not have been more than 4 years old. I spent 30 minutes trying to get him to stop picking his nose and lying in the clay in his white outfit, while his parents looked on disapprovingly at the lack of progress we were making. I actually think this situation mirrors a lot of corporate situations — people hold unproductive meetings where nobody really wants to be there or is invested in the goal, while managers do their best to motivate from afar. Obviously, the glaring difference is the cognitive ability of a 4-year-old, but I learned that summer the importance of motivation. As a manager or entrepreneur, you need to focus first on investing others in the outcome, and focus on the specific lessons second.

In the early stages of AirDev, when we were just a two-person company, we took too long to start investing in creating process and assets that were repeatable and reusable. Each project was an independent effort, and that limited our capacity.

AirDev started as a service business, which I think was critically important in understanding our clients, the market, and our best product to fit the market’s needs. I think too many entrepreneurs jump to making a scalable product, without first establishing credibility and traction with customers. I would really recommend any startup start as a low-tech service and “fake it before you make it”. You will learn a lot from this exercise.

After close to a year of custom projects, Vlad and I decided to “productize” our service offering. We created a process called 5-Day Sprint, where we use a very specific approach to take a client’s idea and turn it into a live app in less than a week. This process was specifically designed to shortcut the typical pitfalls of the outsourced development experience: there is a fixed cost to avoid haggling, a fixed timeline to force a manageable scope, a tool to manage communications, and set design templates to avoid countless iterations. The service is designed to help someone launch their “version 1” product before building something more robust later. The service has been a big hit with clients and a really helpful entry point that has helped us scale.

I attempted to launch a startup during business school, and ultimately had to wind it down. In the end, it was a lack of commitment to the space that led me to walk away. I had launched the effort based on a clever concept I had come up with, but when that concept didn’t work exactly as planned in the market, and it was time to pivot, I realized I was more into the clever idea than solving the problem at any cost. Fortunately, my passion for building software emerged from the experience, and my second company has been entirely based on solving clients’ technology needs no matter the model. This has served as a much healthier approach.

In business school, I won an award for the WORST business idea during an entrepreneurship class, so I would be more than happy to share it here. Each year, too many individuals fail to properly secure their mattress to the top of their vehicle, only to watch in horror as it catches a gust on the highway and flies off into the distance. I believe that the same reverse-lift technology used on sports car fins (to force the car down and increase the wheel’s grip on the road) can be used to solve the runaway mattress problem. The “Mattress Fin” is a plastic device one affixes to the front of a mattress on a car. As the car picks up speed, the shape of the fin pushes the mattress downward, increasing its grip on the car and securing the mattress for a safe and productive ride.

We order lunch for our team in the office every day, and despite our initial hesitancy given how trendy it has become, we have found it to be a really great way to encourage everyone to take a break and eat together.

Our business is built on a tool called Bubble , which is a point-and-click interface for building robust web and mobile applications. If coding is simply a language to be learned, like French, then Bubble is a techie Babel fish removing the language barrier from individuals who want to translate their ideas into products. Around this platform, we use a number of great tools to connect to other services, like Blockspring and Zapier, and fun design resources like Coolors and Logomaker.

I would recommend the Innovator’s Dilemma by Clayton Christensen. It was the start of the term “disruptive innovation”, and provides a very clear and elegant theory around how disruption actually works. In a world where the term has been diluted by overuse, it is important to understand its core meaning and applications.

I am not a morning person, so I really hate having work looming when I wake up. This forces me to complete my work before turning in at night, so I can have a restful sleep.

We order lunch for our team in the office every day, and despite our initial hesitancy given how trendy it has become, we have found it to be a really great way to encourage everyone to take a break and eat together.