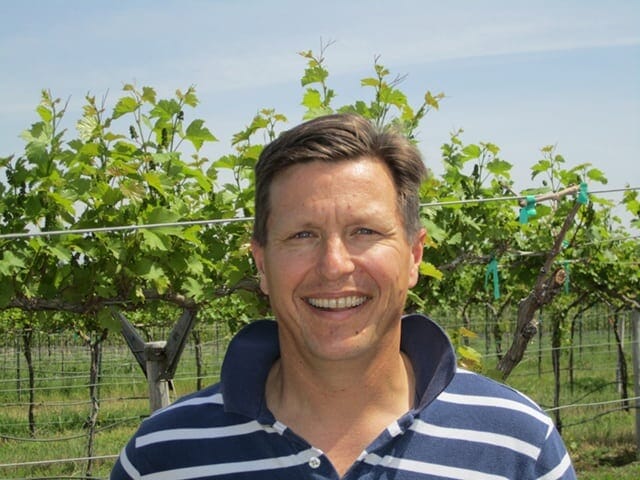 I also don’t eat when I need to focus. I set myself a task, and I know that when I’m finished, I can go and eat.

Andrew Meggitt, a New Zealand native, joined the St. James Winery team in 2002 and has been enjoying life in the wine business for over 20 years. A three-year-long travel adventure around the world following university influenced not only his outlook on life, but also his perception of winemaking styles and methodology. The trip ultimately reinforced his desire to be part of the wine industry and encourage others to enjoy the wine experience.

Winemaking is Andrew’s true passion. Under his direction as executive winemaker, St. James Winery has consistently been among the top four gold medal-awarded wineries in the U.S. When he’s not pursuing his other passion — running marathons — Andrew creatively stretches the boundaries of traditional winemaking while integrating both old- and new-world techniques he learned while working in New Zealand and France.

What drew you to St. James Winery?

I needed a change from where I was. Sometimes, you find yourself doing something you don’t want to do. The company ethos had changed, and I looked around and knew I needed to do something else.

A recruiter was looking for a winemaker, and I thought the challenge at St. James Winery was really unique. There are no rules there. There are no restrictions on wine style. We’re not making New Zealand sauvignon blanc or California chardonnay. We don’t have those boxes. We have the opportunity here to create our own box — our own wine reality — in whatever shape we want.

It was also an opportunity to live somewhere new that really suited our lifestyle. My wife and I have moved a lot over the years. We were in Europe, the Middle East, and Africa, but we’d never been to the Midwest.

My typical day is not typical. I set up my time by the week. I come in at 6 a.m. Around 9 a.m., I head out to the vineyard. I leave Wednesdays and Fridays open for whatever may come up, but on Monday, Tuesday, and Thursday, I plan specific tasks, including budgets, scheduling, and working with team members. If I’m not regimented about this, I don’t get anything done.

During my meetings with my team (the enologist, my assistant winemaker, and the cellar master), I get the opportunity to contextualize things going on with other employees. That may be where new ideas come from. New ideas evolve out of those meetings with them, and we move on from there. Ideas could be as simple as the way we rack barrels.

Most of the time, we just try things. Sometimes ideas work; sometimes they don’t. Bringing a concept to fruition starts in the lab as a small experiment, and some ideas are the result of accidents. Serendipity often rules the day. Like Socrates said, “The only true wisdom is knowing you know nothing.”

The fact that soccer as a sport is growing in the U.S.!

I also feel like much of the wine being made right now has become very homogenized. We can all do better. I’ve been excited to see this trend being shifted a bit in the Midwest. I see people looking for regional wines and wanting things to really represent their place. That’s awesome.

I would like to be able to start our own trend: people drinking Midwest wines. I want people to be able to pick up Pioneer White anywhere and know where it comes from. If people pick up Norton and it doesn’t have St. James Winery on the label, they should be scratching their head.

Having the ability to let other people make decisions. The staff has to be empowered to make decisions. I can trust them to do things on their own, which allows us all to be more productive.

I also don’t eat when I need to focus. I set myself a task, and I know that when I’m finished, I can go and eat.

My wife and I traveled a lot when we got out of school. We moved around, and I frequently got temp jobs between moves. This was the source of my two worst jobs.

The first was working on the Channel 5 building in London. I got a job as a laborer, and all I did was carry doors around the building — every day carrying things from floor to floor. I couldn’t stand it. Every day, we moved the doors. It was the most ridiculous job I’ve ever had.

Right after that one, I worked in a warehouse in the electronics section. We would have to fill orders, and the managers would send out six guys with carts to fill the individual orders instead of just totaling up what we needed and getting things out more efficiently. They had no sense of how much time they were wasting. I couldn’t believe it. They asked me to stay, but, thankfully, I moved on to Ireland.

I wouldn’t do anything differently. If I did, I might not have my wife and kids, and I’d never want that.

As a leader, what is the one thing you do over and over and recommend everyone else do?

Particularly in a production environment, we’re trying to improve what we do every day. You want to create an atmosphere in which everyone feels like they have an opinion and value to share. You have to talk to people and listen. Not everyone is a good listener, but you have to be able to hear and comprehend. I’m fortunate that my father is one of the best listeners I’ve ever met, and I don’t think I really appreciated that until recently. He knew to ask the right questions and really listen to your answers. This is something I try to do every day.

Constant process and product improvement. It’s about making better wine and making sure that when someone buys a bottle of wine this year and then buys it again next year, the second bottle is even better than the first.

We’ve also increased our offerings. We went from having 18 SKUs to 29. It all stems from listening and understanding what people want from the market and what our retailers and distributors want. We went from selling volume to selling who we are.

There’s more than one, and that’s what’s good! I feel like we have to make mistakes to get better.

Moscato is a great example. We started making moscato back in 2003. I don’t know how many are out there now. When we first started making it, we overproduced, didn’t market it well, and had dated packaging. The timing was off, too.

Now when we go to do it, we have the entire organization ready to support it. It’s a huge wine for us now, but at the time, it just didn’t work. Of course, right after we stopped making it, the market turned around, and everyone was asking about it. In those days, I got all of the customer service calls! Now that we have the sales and marketing organization and the market insights we need, we’re able to avoid product failures like that one.

Someone needs to come up with an app for wine that reviews wine in a genuine, authentic way. It should be something that doesn’t feel sponsored — something that’s not about advertising.

Also, an independent organization that helps with grant writing would be great. This may already be out there, but I see a huge need for it in our area.

I don’t sleep well, and I’m terrified of failure. It motivates me to do everything I do. Not being the best at what I do scares me to death, and that’s why I’m motivated.

Evernote and Microsoft Outlook. (My Outlook calendar is like a military operation. If I don’t adhere to it, nothing happens.)

I use Skype to talk with my family in New Zealand, and I also use SureHarvest, VinWizard, and Vin-X. Interestingly, I don’t use a lot of wine search sites. I love the tactile experience of walking into a store.

“The Oxford Companion to Wine.” It’s the Wikipedia of wine and Jancis Robinson accurate. It also lists references and resources. If I’m not sure about something, I use this resource and move on.

At home, I’m reading “Insurgent” because my 11-year-old son recommended it.

My parents. They’ve influenced my outlook on life. When I had the opportunity to go to France and England, my father said, “Life isn’t a dress rehearsal. Just get out there and get on with it.”

Also, the people who used to work at the McDonald Winery in New Zealand really fostered my passion for the wine industry. When I left there, I enrolled in winemaking school.