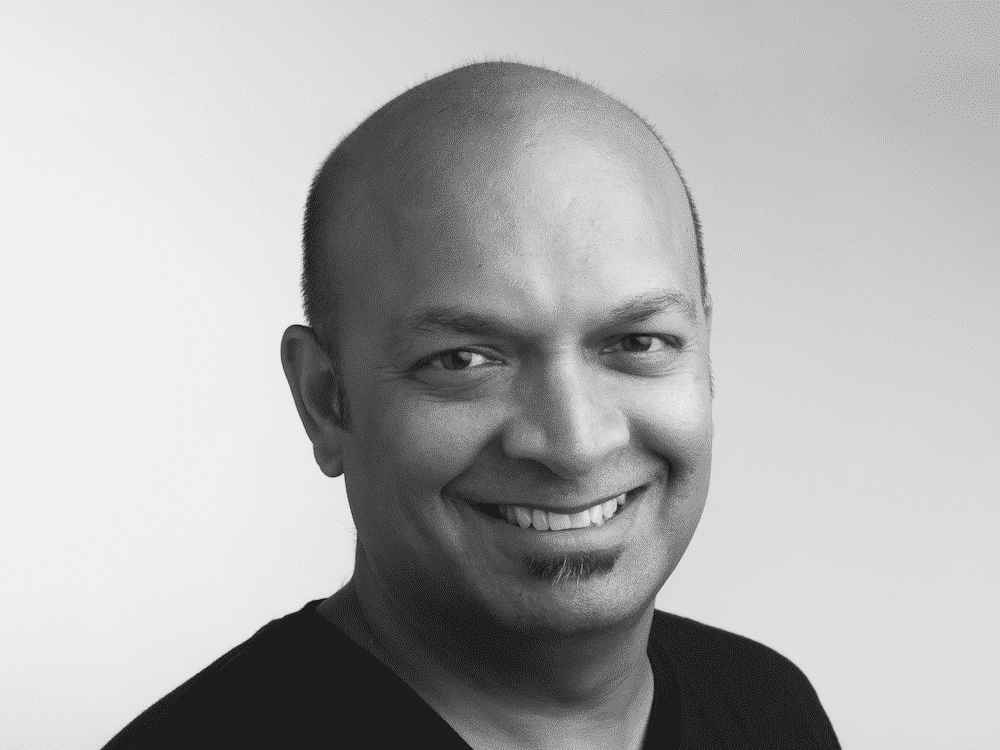 As long as I can bring people into the idea of inclusion being a profitable business tool then I have a shot…This isn’t just a business idea; it’s a humanity/business idea. And who doesn’t want to be a part of a business that makes the world more human?

Arun Nemali is a 20+ year award-winning advertising Creative Director/Copywriter based in New York City. He is the founding partner of The Lucy Collective, a startup creative advertising agency built around diversity and inclusion. Arun’s (and Lucy’s) passionate belief is that for brands to connect better with a rapidly diversifying population of America, it’s essential that their storytelling be created by a diverse team of people.

Arun’s work has been recognized and awarded by the One Show, Cannes, Art Directors Club, The Effies, Archive magazine, and is a part of the permanent collection at MOMA.

Arun Nemali currently lives in Manhattan with his wife, three daughters and a male puppy who helps raise the testosterone level at home.

Our founding partner, Adam Levine (a white, Jewish, gay guy) came to me (a brown Indian guy) with this notion of starting a company that’s diverse from the top down. I thought it was amazing because it addressed something that I was already trying to navigate in my work life. It was also perfect timing in terms of the conversation occurring within our industry and the world at large. Some of the most powerful CMOs were screaming for more diversity in their agencies and demanding work that felt more inclusive to various audience segments. We thought we should answer them. The concept also resonated on both a personal and ironic level. When I first tried to break into Madison Avenue in the early 90s, I actually had to whitewash my Indian brain to think more American —  meaning more Caucasian. More and more, I realized that my differences, not my similarities, made my ideas more interesting from the dominant culture.
Just to be clear, The Lucy Collective’s approach isn’t militant. It’s more of a benevolent activism that addresses the growing realities of the American population. According to the US Census, the white population will be less than 50% by 2035 for the first time ever. Therefore, to create advertising communication for this diversifying population, it makes sense for the creators to be equally diverse, too. You can reach and connect with more target segments and create greater sales this way. Sounds simple, right? For us, it’s the only sustainable way forward for the ad industry.
We had a bunch of ideas in terms of branding our agency, but we needed to mirror the idea of an agency that reflected the population. Our founding team kept playing with the idea that those who create the work should mirror those consuming it. Then the thought hit me: We all descended from the same missing link, the hominid Lucy, discovered in Ethiopia during the 70s. She became the inspiration for the name while the DNA strands that tie us all together became the symbol for our logo element. It represents how “We are all Lucy.”

A typical day is different in a startup. There are small, routine tasks we do like reviewing work traffic and monitoring cash flow, but our project is not routine. Of course, the search for new clients is a daily activity. In the back of our minds, we constantly think about the differences we can make. Everyone starts off wanting to change the world, but as we grow up, adulthood and reality take hold and we stop saying it because it’s embarrassing to make such a big claim. In our opinion, the way to do it and not be ridiculed is to say, “We have an idea and a purpose and through our lens and skill set — in our case advertising — we must do everything we can to make the world more inclusive.” Adam and I talk incessantly about how we need to jettison some of our own internal thoughts because people often learn how to view another human being through a negative lens. Similarly, we reevaluate every decision we make about people, cultures and how we talk to them through our skillset of advertising.

Before we think up ideas, we build a strategy and we do it around a table with a diverse group of people – our company is made up of 50% women and is 100% diverse. At our agency, The Lucy Collective, our mantra is “Who does the work matters.” Once we have the strategy, we then ideate in smaller groups but always come back to the roundtable to make sure that each and every idea is true to the brand, solves the problem at hand, feels original, and remains inclusive of every segment of the audience —  always. Afterward, we (along with the client) try to imagine the biggest form of the idea in terms of execution and the budget. Then the creation begins.

The drive in humanity is to be its best self. The current political climate creates the context which is amping the need for us to be better to each other. Now is when inclusion matters most.

I never stop sharing the beauty behind Lucy’s idea of inclusion. As a creative person, I’m not so good at being a rainmaker. I think as long as I can introduce people/clients to the idea of inclusion as a profitable business tool, then I have a shot. I drive my wife crazy with how much I talk about it even in my social circles, but it’s what I have to do. This isn’t just a business idea; it’s a humanity/business idea. And who doesn’t want to be a part of a business that makes the world more human?

As a creative spirit, I was rebellious and didn’t appreciate the people more senior to me that much because they represented authority and oppression. I looked up to very few mentors. I should have been more open to anybody more senior than me and learned more from them. I think I needed to get older to appreciate that. That’s what I would have done differently and that’s the advice I’d give my younger self. Also, I would urge my younger self to have become an entrepreneur earlier.

Everybody is prejudiced against certain people to a degree. But everybody, if you scratch deep enough, wants to evolve past that.

I wake up early because that’s when my mind is the sharpest. I then tell myself to flush all doubt from my head. This mentality makes me more productive and allows me to execute the things I need to do each day to make our business grow.

Our agency is purpose-driven, and the purpose – diversity/inclusion – is a living breathing thing that society at large is trying to bring to life in real-time. Among one of our most important strategies, we constantly strive to evolve and sharpen our narrative. So, when we make our pitch to a client and we see their eyes widen imperceptibly or their chins nod, we know we’re doing a good job of communicating our value proposition.

I started an ad agency before and, while I loved my partners, I wasn’t getting the effort that they had promised me or I expected from them. That agency is shut down now. This time around, I’m trying not to have expectations. Instead, I try to encourage our team as much as possible. I also try to address conflicts early on with the intention of reaching a positive way forward…always.

This is not a business idea, but it’s been on my mind because of recent events. I would love to organize a nationwide effort that brings together every voting ballot design from each state, studies them and holds an open contest that chooses the country’s best designers. We’d then submit designs for the perfect ballot; one that’s clear, easily countable and fraud-proof. It’s not a business idea, but it would serve to make our world better. I have a lot of these kinds of ideas floating around in my head.

Jabra Bluetooth headphones. As I speak, I have my hands busy with other tasks so I can get more done.

There are too many great ones out there that do different things for me. I think the best software is the one in my brain. Every now and then, like on a weekend day, I’ll leave my smartphone at home and go for a long walk with my dog or kids to get in touch with my thoughts, or should I say “software.”

The Book of Gossage, Howard Gossage.
Gossage was one of the finest, most practical and realistic creative minds in our industry. Everything he says is still so relevant because his creative thinking was based on the most timeless principle: That human needs are universal and unchanging. He was also incredibly respectful of consumers and how advertising spoke to them.

“Be the change you want to see in the world.” I know it’s a cheat because it’s by a fellow Indian, Gandhi, but I love it because it’s about control. You can’t control anything outside yourself, but if you try and control how you operate, it could have a positive impact on the world.