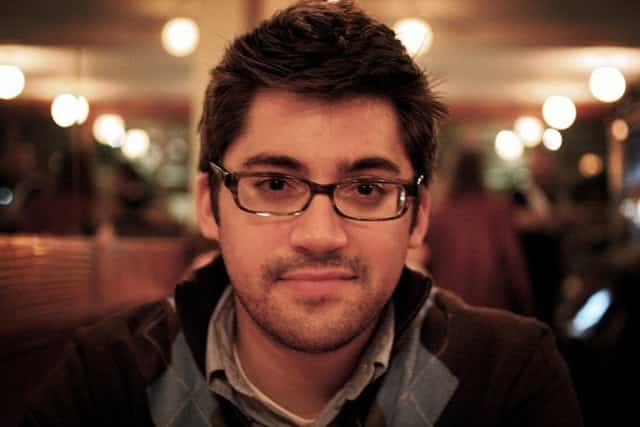 Austin Kleon is a writer and artist. He’s the author of Newspaper Blackout, a best-selling book of poetry made by redacting newspaper articles with a permanent marker. New York Magazine called the book “brilliant” and The New Yorker said the poems “resurrect the newspaper when everyone else is declaring it dead.” His new book is called Steal Like An Artist — a creative manifesto based on 10 things he wish he’d heard when he was starting out. His work has been featured on 20×200, NPR’s Morning Edition, PBS Newshour, and in The Wall Street Journal. He speaks about creativity, visual thinking, and being an artist online for organizations such as SXSW, TEDx, and The Economist.

Austin Kleon lives in Austin, Texas, with his wife, Meghan, and their dog, Milo. Visit him online at www.austinkleon.com.

I’m promoting Steal Like An Artist, gearing up for my SXSW panel and subsequent book tour, and I’m writing an essay about plagiarism and forgery as models for art-making.

Where did the idea for Steal Like An Artist come from?

Last January, I was asked to give a keynote speech to a group of college students, and I was terribly nervous about it, so as I do when I’m terribly nervous about things, I went for a walk with my wife and asked for her advice. She said the best talk she ever heard was just a list of things the speaker wished she’d known when she was starting out. I decided to steal that idea, went home, and wrote up a list of things I wish I’d heard when I was starting out. When it became clear that the talk should become a book, I took my own advice from point 3 — “Write the book you want to read” — and just tried to write a book that I could stick in a time machine and send back to a younger version of myself.

My typical day looks drastically different from what it used to, because I just left my job as a copywriter at an interactive agency a few weeks ago to give being a full-time writer and an artist a shot. So far, I wake up at 7 or 8, have some breakfast, check Twitter, and then I go up in my office and make stuff up until dinner. I aspire to filmmaker John Waters’ summary of his day: “I make stuff up in the morning and sell it in the afternoon.”

Usually with pen, paper, and a scanner.

The new companies helping artists and makers receive monetary support direct from their fans — Square and Kickstarter, specifically. Every time I swipe a credit card on my Square reader, it’s like magic, and I’m thinking long and hard about whether to use Kickstarter to fund my next book project.

My worst job was bailing hay in the middle of July in Southern Ohio, and I learned that I really really never wanted to bail hay again.

I wish I’d established an exercise habit earlier in my life. As much discipline as I have in my creative work, I just can’t seem to embrace any other form of exercise other than walking a lot and doing pushups.

I wish I had one to give away! I don’t have a very sophisticated business mind. My plan is to make money and not spend it all.

If you could change one thing in the world – what would it be – and how would you go about it?

I’ll steal two things from Kurt Vonnegut: public classrooms of 15 or less and free health care for everyone in America. I’d take the money out of the defense budget.

Dropbox, for never having to carry a flash drive.

Other than Steal Like An Artist? I just finished Susan Cain’s Quiet, a great book about introversion — I’m a mega-extrovert married to a mega-introvert, and I credit our knowledge of extroversion/introversion as a key factor in keeping our marriage together.

Lambchop’s new record, Mr. M, and a bunch of old Bobby Womack tunes, including, “If You Think You’re Lonely Now.”

Follow @brainpicker and @openculture for ideas worth stealing, and @Horse_Ebooks for a dose of absurdity.

I was doing the dishes and watching an interview with the film director Billy Wilder and he said something hilarious that I totally forget now.