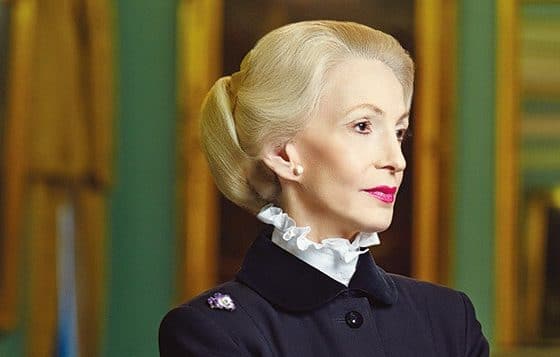 Lady Barbara Judge boasts an incredible career, having held numerous key positions in both the private and public sectors. Some of her most notable roles have included Chairman of the United Kingdom Atomic Energy Authority, the youngest-ever US Securities Exchange Commissioner (SEC) and the first female director of a London Merchant Bank. Lady Barbara Judge is considered to be one of Britain’s most influential women today.

Lady Barbara Judge trained as a commercial lawyer. After receiving a B.A. from the University of Pennsylvania and a Juris Doctor with honours from New York University Law School, she worked as a partner at a major US law firm specialising in corporate and financial transactions. In 1980 she was appointed by the President of the United States as the youngest-ever Commissioner of the US Securities and Exchange Commission. In her role, she helped introduce significant reforms to the financial sector, opening the US markets to international investors and facilitating US investment into foreign countries. Lady Barbara also negotiated with the Tokyo Stock Exchange to permit foreign investors to buy seats and to assist Japanese companies to list their stocks in the US.

Passionate about business innovation, Lady Barbara Judge is the Chairman of several digital start-ups, including The Cambridge Code, LoopUp and SmartUp. She is also Chairman of the Management Board of the non-profit organisation SNOMED International and was also a Royal Academy of Arts trustee for over 15 years.

Alongside her business activities, Lady Barbara Judge worked on several initiatives aimed at providing more opportunities for women in business. She was the Inaugural Chairman of Cass Business School’s Global Women’s Leadership Program. She is also the Trustee of the Lauder Institute at the Wharton School of Business, where she is a frequent guest speaker. Lady Barbara was previously an advisor to Barclays specialising in mentoring high potential women. She is also on the board of AccelerateHer, an organisation focused on improving the business landscape for women.

Lady Barbara Judge completed two terms as the Chairman of the United Kingdom Atomic Energy Authority and was the Chairman of its Audit Committee. She also completed two terms as Chairman of the UK Pension Protection Fund and in 2015 received a Sunday Times Non-Executive Director Award for her chairmanship there. In June 2010, she was awarded Commander of the British Empire (CBE) for her contributions in the finance and nuclear sectors. She has also received the Forward Ladies Lifetime Achievement Award and is considered one of Britain’s top 100 most powerful women.

My first entrepreneurial adventure was called ‘Net Investor’ (later changed to Private Equity Investor). In the late 90s, I started a fund of fund, with a partner, focused on investments in technology. We launched the business at the height of the dot.com boom, and invested in US based limited partnerships, which provided venture capital to unquoted technology companies. Our portfolio included some of today’s biggest internet and technology businesses including Netflix, Twitter and Baidu.

I get up very early, around 5am, as I feel I am most productive in the morning. I then start my first business calls with Asia, particularly Japan and China. Around 8am, I move onto my first appointment, which is usually a breakfast.

I have always found that breakfast is the optimal time for a meeting, because it is finite. It never lasts more than an hour and you get the most out of your discussion as you are energised for the start of the day.

One key element to keeping my day productive is to be very organised with my schedule and to concentrate on time management in order to fit in as many appointments during the day as possible.

I like working in a group and brainstorming. I think it is very important to spark one’s ideas in partnership with others. From my experience, people always work better in a team. Having different people with different backgrounds work on developing an idea is bound to create a project far richer than if you worked on it alone. Once the idea materialises, I work very hard to make it a reality.

I increasingly see young, smart individuals working in businesses for a few years then launching their own start-ups. I think it’s incredibly inspiring to someone of my generation. The shift towards a more entrepreneurial society is exciting and exhilarating. I fully support young ambitious individuals, that is why I sit on the boards of several start-ups such as The Cambridge Code, LoopUp and SmartUp.

Time management: making meticulous lists of everything that needs to be done and keeping a detailed calendar. Organisation is a key factor for most people’s success.

One small point is that I actually save time every morning by wearing the same type of blue or black suit with a high-collared white blouse. It is kind of like a uniform and has worked well for me for many years. Be smart about how you spend your time.

I am proud of what I have achieved. If, however, I had to advise my younger self, I would say: study maths and engineering and try to work in technology and biotech. In my opinion, that is the future.

I would also tell my younger self, should I be in a large organisation, to focus on running a specific division of the business. It is important to be part of a company division that earns money, rather than spends it. Ultimately CEOs are often chosen from managers of successful divisions.

I want to die at my desk. I believe that working hard will keep me healthy and happy and will allow me to have an interesting life. I want to be as busy at 80 years old as I was at 50.

Also, I have to admit, the idea of beach holidays is not so appealing to me, I get bored very quickly when I’m not working or being productive in some way.

I’d like to share two. Always be prepared and do your homework. Study the biographies of the people and the business contacts you are about to meet, as well as the required documents.

Secondly, think about the first impression you make when you meet somebody. 70% of that impression is influenced by how you look, 20% is how you sound, and only 10% is what you say. Consider, therefore, what a key player may think of you. Take charge of the impression you give of yourself, don’t let someone else wrongly define you. Always try to define yourself.

I would say concentrating on sales. Before spending the money, make sure you have enough in the bank. Focus on the bottom line: the most important aspect is to bring in cash and create a solid base on which to build.

My first venture required me to give presentations and I realised I was not very good at it. In fact I was terrible. Fortunately, older and wiser friends of mine suggested that I get presentation training, which I did. The presentation coach gave me valuable lessons about always writing your own speeches so that you can sound authoritative. He also taught me to smile when starting a speech as it gets the audience on your side. He also suggested that I learn to speak with my hands, as most good speakers do this.

I truly believe med-tech is the future. Think about it this way: the baby boomers are getting older and don’t want their later life to be clouded by illness. There is a demand therefore for cutting edge technology and medicine to keep them alive and healthy. Med-tech responds to that need. Investors understand that as well. It’s a perfect circle.

I think specifically, the focus should be on developing an earlier diagnosis for cancer. There should be a blood test or a specific screen that can test cancers that have been previously thought as incurable.

I was in Boston for a board meeting. At the last minute, I spent an extra $100 on a good driver to take me by car to New York in order to spend the day with my 96-year-old mother. Time with family is invaluable.

My iPhone emails and WhatsApp. In this day and age when people want immediate responses, life without a smartphone would be very difficult.