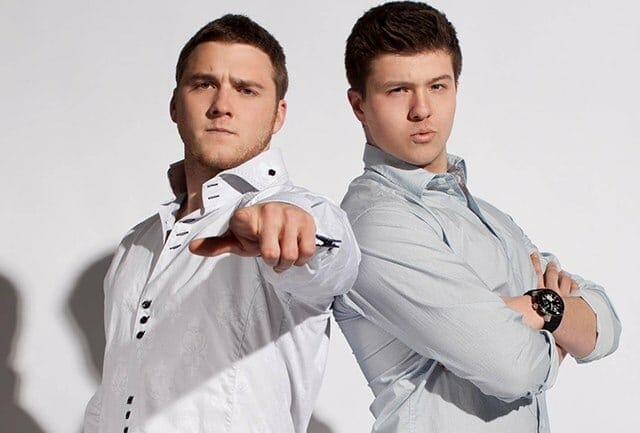 [quote style=”boxed”]There is going to be an aspect of your business you despise doing. Get it done, and once you’ve pushed hard enough to reach the next level, you can hire someone else to do it for you.[/quote]

As founders’ stories go, Ben Vanden Wymelenberg’s tale can be placed into the—came up with a business idea while supposed to be studying—category.

Ben Vanden Wymelenberg attended the University of Minnesota-Twin Cities, graduating with the highest honors in Architecture and earning the US Oil scholarship three years in a row.

One night, while building a model for his college architecture class, then-22-year-old Ben placed a small slab of wood on top of his iPhone, just to see if it would fit. This little experiment sparked an idea that would change his life forever.

Having witnessed first-hand the effect of the 2008 financial crisis on his hometown, Ben and decided to manufacture, print, and assemble Woodchuck cases in Minneapolis. Ben and Kevin remain committed to keeping Woodchuck American-made.

Their passion for the product and stick-to-itiveness led to a deal with Mall of America. From that came Bestbuy.com, then Target. Now, the sky is the limit for these 23 year-old. They just signed a national distribution deal and are planning the launch of stores across the US.

Ben and Kevin find in energy and drive in the outdoors. Which is why the company mission is “Putting nature back into people’s lives.” Through their recent partnership with non-profit Outdoor Nation, their dream of re-igniting the human bond with nature is becoming a reality.

Between the pluck of its team and the Made in the USA commitment, the company has caught the eye of the media. It has been featured on television in Minneapolis, where it was part of a segment on homegrown products, appeared on the fashion site Refinery29, EXTRA! TV, Upstart Business Journal, Minneapolis St. Paul Business Journal, CBS Radio and other media outlets.

We are looking to expand into fashion apparel and into other lifestyle avenues. If we had our way, we would put wood on everything, including cars! We have so many ideas on where we want to take our brand and concept, we will be unveiling some of them in October after our launch in Target stores nationwide.

Where did the idea for WoodChuck come from?

One late night, while building a model for his college architecture class, Ben Vanden Wymelenberg placed a small slab of wood on top of his iPhone, just to see if it would fit.

Ben’s idea?…He would create 100% real wood covers that serve as classy, eco-friendly and durable wooden accessories for iPhones and iPads.

Having witnessed firsthand the effect of the 2008 financial crisis on his hometown of Minneapolis, Ben started small and decided that the manufacturing, printing and assembling process would always take place in Minneapolis-Lending to his goal of creating an authentic American-made product.

Each day is different for us. We usually spend the morning shifting through ideas that we thought up the day before. Then we check in with our publicist, manager, and manufacturing to see what action items we have for the day. We tend to have meetings in the afternoon with buyers and creative team, we are always moving we try to not stay in the same place for too long.

Focus, confidence, and a never-give-up attitude allows us to follow-through and bring our ideas to life. We credit Simon Sinek’s leadership book, Start with Why as Inspiration. For every idea we have we also come up with a ‘why’ to help facilitate the necessary steps to make it into a reality.

Apple’s frequent launches of products helps up stay on top of the game. They truly revolutionized the market-space, most of their competitors base their launch model off Apple’s. The technology for cell phones and tablets continues to amaze me which is exciting because it means I can come up with new products.

In college I got a job scrubbing dirty boilers at the campus heating facility. I learned that there are always going to be tough jobs in life, and they need to be done. Starting your own business is no different. There is going to be an aspect of your business you despise doing. Get it done, and once you’ve pushed hard enough to reach the next level, you can hire someone else to do it for you.

We don’t live with regrets and believe everything happens for a reason. The only thing I would do differently is to have come up with the idea 5 years ago.

Always ask questions. You can never ask too many questions, or stupid questions. You’ll uncover more information and opportunities you didn’t know existed. Being an entrepreneur is forever a learning game, and one of the best ways to learn is to ask the right questions.

We once sent out a large batch of defective product and ended up angering quite a few customers. As soon as we realized our mistake, we took immediate action, called every customer who had the defective product, replaced it. Since we showed our fans that we cared about their satisfaction, they were much more understanding of our mishap.

An app that geo-locates open parking spots in busy cities.

Connect people back to nature – we are doing this through our product and partnering with outdoor non-profits.

I was on the Cheer Team at the University of Minnesota for 3 years.

Google because I can literally research anything. Linkedin because it is a great tool for networking and Facebook because I can connect with my customers.

Simon Sinek’s ‘Start with Why’