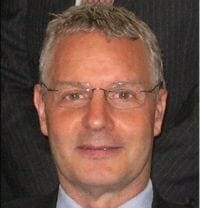 Bill Staby is the founder and chief executive officer of Boston-based Resolute Marine Energy, Inc. (“RME”) — a developer of technologies for harvesting energy from ocean waves.

Bill is an experienced manager of early-stage technology companies. His entrepreneurial career started in 1997, when he was co-founder of an Internet floral delivery company that subsequently went public. Bill then helped start two companies in media technology and business process automation before founding RME in 2006. Earlier in his career, Bill was an investment banker at First Boston Corporation, where he was a member of the Electric Utility Corporate Finance Group, and later he was co-head of the North American mergers and acquisitions team at Rabobank International.

As a member of the Executive Committee of the U.S. delegation to IEC-TC 114, Bill is actively involved in the development of international technical standards for wave and tidal devices, and through his service to the Ocean Renewable Energy Coalition in Washington, D.C., he is helping guide public policy related to R&D investment, market incentives, regulation and marine spatial planning. Bill attended Rhode Island School of Design and the University of Oregon before receiving his undergraduate degree from CUNY Bernard Baruch College in 1985. He earned his master’s of business administration from New York University in 1987, which included a semester of study at H.E.C. in France.

In 2010, Bill was a featured speaker at TEDx Boston.

Sustainability — The first trend I’m really excited about is society’s increased focus on sustainability, which has forced us to ask important questions about what and how we consume and even to ponder the more fundamental question … why? One reason we started RME was to address an important aspect of sustainability — the need for clean renewable energy to help society kick its dangerous addiction to fossil fuels.

Diversity in the Workplace — We see and support the trend toward employment opportunities becoming available to a much wider array of people, i.e. without regard to their gender, nationality, religion or sexual orientation. RME’s marketplace is global, and therefore, we believe its workforce should reflect that.

Global Prosperity — One of the greatest threats society faces is increasing tension between rich and poor countries based on an unfair distribution of wealth. We hope that increased recognition of this fact will result in a trend toward the development of responsible solutions. That’s why one of our core business objectives is to use our wave energy converter technologies to desalinate seawater, and thus provide clean fresh water to water-stressed regions and communities in developing countries.

I know it sounds trite, but there’s really only one way to bring ideas to life, and that’s through a personal commitment to hard work and perseverance. If you substitute the word “success” for “genius,” I firmly believe in Thomas Edison’s observation that “genius is 1 percent inspiration and 99 percent perspiration!” There inevitably comes a point, however, when you cannot do everything yourself, and you have to start relying on others. So, I’d say that another way to improve your odds of successfully bringing ideas to life is through self-awareness and trust, i.e. recognizing your own limitations and having the self-confidence to actively seek people who are much better at what they do than you are. I think good ideas get to be great ideas that way!

Lots of things inspire me, but if I had to pick one thing, it would be reading about people who have led very creative and productive lives. Big achievements or little achievements — it doesn’t matter to me. I admire people who take action to fix things they think need fixing.

I’ve made all kinds of mistakes, everyone does. Leaving aside mistakes made in my personal life, business-wise the biggest mistake I’ve made was to have a false sense of security that everything would work out just fine. The “rose-colored glasses” syndrome you could call it. Sure, one characteristic of entrepreneurship is optimism in the face of sometimes overwhelming odds, but another one is being afraid that the wheels can come off at any minute unless you pay careful attention to everything. So, my advice is to first get the priorities right, and then keep moving ahead one step at a time while constantly making reality checks.

Okay, this may seem strange, but it’s a movie idea having to do with the use of performance-enhancing drugs in the sports world. “The Wrestler” (a great movie) touched on that but … someone should write a script!

Two things you need to know: 1) I barely have time to read, and what time I do have is devoted to newspapers and industry-related publications; and 2) I’m somewhat of a technology Luddite. I have trouble, for example, understanding the value of Twitter, however I highly value search tools like Google, and Wikipedia is my idea of information heaven. If I were a journalist, I’d probably still be using a typewriter. The point is, in my opinion, technology’s role is to help improve what’s going on between your ears.

Sarah Palin or anyone else likely to “out” the Tea Party movement as completely the wrong direction we need to be moving.

What would you identify as your greatest skill?

Many have said that I’m a terrific networker, but I’ve met several other people over the years who make me look like an amateur. I’d say that my greatest skill and primary role as a leader is in finding people, building teams and driving consensus. Maybe it’s because of my sports background, but I place a very high value on team work, and nothing sets me off more assuredly than someone who doesn’t see the value in that. It’s not teamwork in the “rah rah” sports sense, it’s teamwork in the “who’s in the foxhole next to me” sense. An “I’ve got your back” mentality is, to me, a sign of a very healthy organization.

What do you do in your spare time?

I’m currently sidelined with an injury, but I row competitively in the Senior Master’s program at Community Rowing in Boston. First, being in good physical shape is a necessity for me, because it helps me focus, and second, there’s nothing quite like being on the starting line in those last few seconds of the start countdown. It’s in the dead quiet before the blastoff that true character is forged.