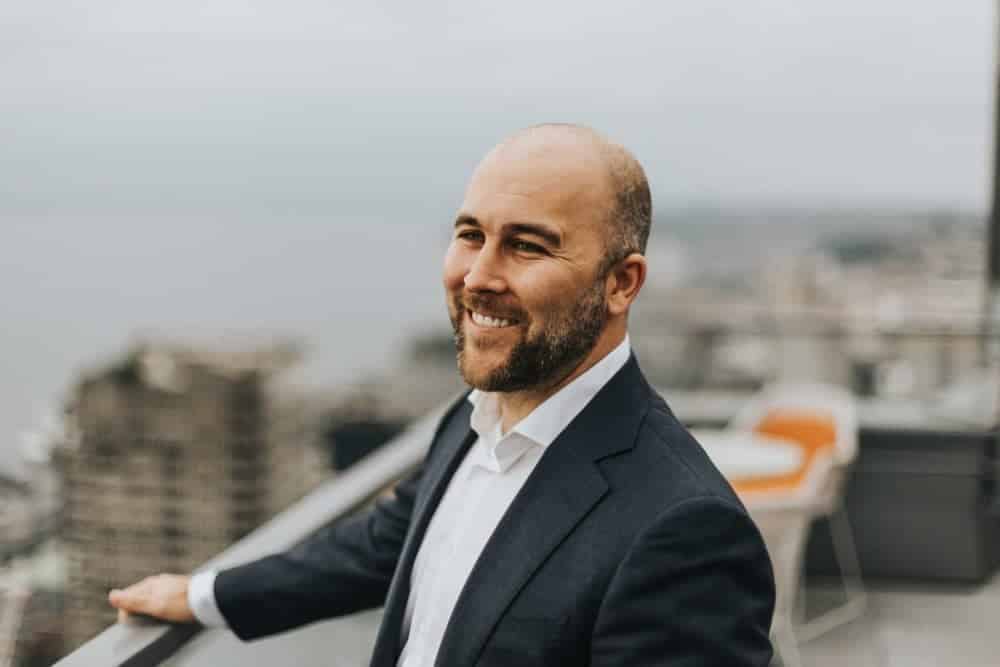 Believe in the idea that you don’t need other people as much as you maybe think you do – or at very least – you don’t need their permission or their buy in to get started.

Brandon Peterson is a Seattle-Based software developer and entrepreneur with nearly 20 years of startup and technology experience.

He is the founder of Capitol Call – a political action platform and mobile app – that aims to take the guesswork out of contacting congress and to truly democratize lobbying lawmakers – giving the voice back to everyday citizens.

He is also the owner and lead architect for object studio – a boutique “startup factory” – offering development and product creation services to help innovators and entrepreneurs launch new and groundbreaking ideas.

Where did the idea for Capitol Call come from?

My eureka moment actually struck while I was working out. I was finishing an anxiety filled ride at Flywheel the evening after President Trump’s inauguration and inspiration hit. By Sunday afternoon – after returning from the Women’s March and getting a big dose of inspiration – I wrote the first line of code. A week later, I published version 1 to the app stores.

It was my belief that the best way to hold our country’s new leader accountable to all the people that he now served was by ensuring the legislative branch continued to provide a strong check on executive authority. In the lead up to the inauguration, there was an article floating around the internet that gained quite a bit of notoriety written by an ex-congressional staffer arguing the case that to really influence congressional action – calling was the most effective way (other than actually visiting their office). And so with a healthy dose of endorphins coursing through my brain after 45 minutes of intense cardio, these two ideas came together and the idea to provide a dead simple tool for everyday citizens to directly contact and pressure their lawmakers was born.

Over the next few months – the idea really shifted and became less of a knee-jerk reaction to a particular administration and changed to be a more generally targeted tool. My concerns became less about President Trump alone and more about the growing partisan divide in this country. And so the last 9 months or so have really focused on creating a tool for all citizens – providing a resource to encourage better civic engagement and more informed discussion.

My typical day is best described as a professional juggling act. My days primarily focus on my client work through object studio and my evening my labors of love with Capitol Call. At any given point, I’m generally managing 4 or 5 different products including my own.

To make this manageable – I use a task management technique that I call “pipelining”. I’m sure someone who studies these things has written this down someplace and given it a real name – but I operate under the assumption that I am only one person with a single pipeline of work I can do. So I put all my tasks in order and move them up and down as appropriate, checking them off as I go. I of course have other tracking systems for tracking projects as a whole – but once something is assigned to me, it hits my pipeline and either gets done or delegate or deprioritized.

I am fortunate in my work that I get a great deal of personal ownership over the work I do – largely because I often wear many hats. This means that my responsibilities on an idea often range from scoping the idea, designing the UX, developing the code, facilitating the release, coordinate the support, shaping the marketing message, etc.

This is a long way of saying that in bringing an idea to life – I am often intimately involved. And I think the key trait that I bring that allows me to play so many roles is that I am a people-first technologist (and not a technology-first technologist).

The success and failure of an idea is often not in its core technology but in it failing (or succeeding) to properly fit in the context it will be used and to align with expectations and goals of the people that will use it. So the goal should really be to understand the context of the solution before ever making any mockups or writing any code.

What has always interested and excited me is the intersection of humans and technology in our everyday lives. As we now share more and more of our lives with our devices, they really begin to influence our behaviors and create new forms of interaction in our personal and professional experiences. Beyond just enhancing our digital experience, our interaction with the physical world is being altered and augmented based our expectation of connectivity and faith in the information and logic coming from our machines.

While I think wearables (beyond exercise monitors) are a ways off from being mainstream, I think the surge of Bluetooth Low Energy devices in going to introduce a wave of passive computing scenarios what the world around us “just knows” and we see a slew of real world elements in our lives become interactive and automated.

Well, to not rehash my task management style above – I think what makes me a productive entrepreneur (ie what allows me to produce more product) is my strong affinity for the DRY principle: Don’t Repeat Yourself.

When you build a lot of things – it often seems very cyclical with significant moments of repetition. The more that we can harness our past efforts and repurpose and adapt them to the current task at hand – the more we can create systems that automate repetitive tasks – the more time we have for new ideas – because we are spending less time doing things we’ve already done. And often – if we build things with this idea of repurposing initially – we can see massively reduced costs on future iteration – with increased quality.

This is a central tenant to how I approach my businesses and the advice that I give to clients.

I think the main advice I would give is to believe in yourself more. Believe in the idea that you don’t need other people as much as you maybe think you do – or at very least – you don’t need their permission or their buy in to get started.

This is not a way to say that you should go it alone and refuse to seek out other talented people – I think collaboration is incredibly important and the only way that you’ll ultimately find success – but this is more to say that don’t wait for someone else to start something to get onboard. Be the person that starts something.

My greatest successes have come from being the person that started something and then recruited people for the ride.

These will probably be a bit too nerdy for many readers but for the technically minded – I’m sure I’ll have plenty of dissenters: Command Line Interfaces (CLI) are not and should not be “the future” of development tools.

The last several years have seen a massive surge in the number of CLIs developers use – and why? It’s 2018 and we have cars that drive themselves, but I’m still typing out commands like it’s the 80s.

They’re error prone, they’re cryptic and hard to learn and understand, they are a serious violator of DRY philosophy, and (unless you’ve taken the time to hack together all your super secret command line shortcuts) they’re slow to use.

So anyway… that’s my rant.

Track my time. I track almost every second of it and know where my time and efforts go. It allows me to align my values and goals with what I am committing to them.

My core growth strategy is around strategic partnerships – in both my consulting operations and advocacy efforts. Finding individuals or companies with similar goals and access to qualified customers often goes further and has a higher ROI than slogging it out for each new customer or user where you don’t have a friendly referral. You also get to work with more interesting people but without the complexities of partnership.

With Capitol Call, not earning the trust of our users first before asking them to trust us. As I’ve mentioned, one of the goals of Capitol Call is to educate and expand the perspectives of our users – and in order to do this you have to expose them to new ideas – and ones that may challenge their accepted beliefs.

The initial app version simply displayed all these perspectives without filter (for the sake of openness) and allow the user to identify their truth from these. However – this has proven to create animosity, distrust and rejection in many cases. It is now my thinking – that to be successful at challenging someone requires that you come from a place of comfort and trust. From that point, you can gradually introduce new ideas, opposing viewpoints and potential influence hearts and minds.

One idea – totally unrelated to my field – would be to create a company that provides dinner meal plans to large apartment complexes – and that cost is just added to your rent. In dense cities like Seattle, they have numerous prepared meal services for lunch – but when it comes to dinner there really isn’t options if you don’t want to cook or go out.

My fiance and I spent a night a local hotel for the fun of it. Even though it was only a few blocks from our house – that small change turned an average Saturday in to a romantic getaway. Especially because I commit a lot of time to my professional endeavors – it is important to set aside dedicated time for those we love.

I use Toggl to track my and my team’s time. First – it’s how I bill my customers – so it obviously has financial importance in my company – but it also helps me prioritize and gain insight on what work is profitable and is moving my businesses forward.

The Happiness Advantage by Shawn Archor. As he argues, life is a series of moving goal posts – if you can’t be happy with where you have gotten – you not going to find it at the next milestone. And happy people attract new opportunities – which is what every entrepreneur aims to do.