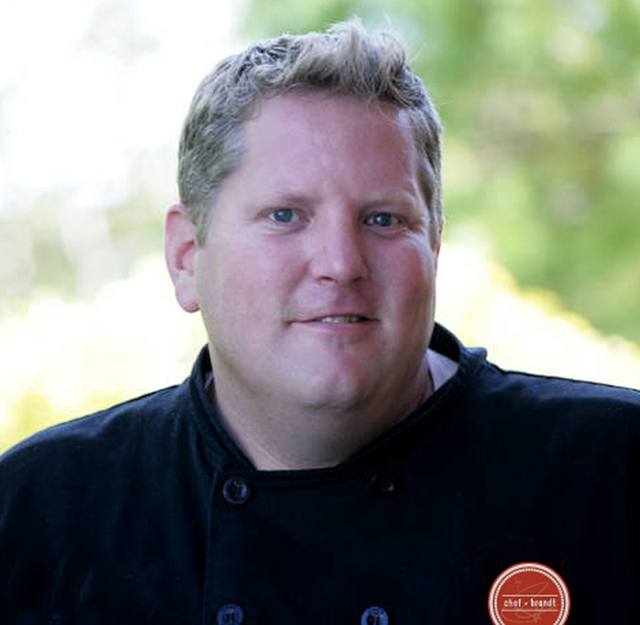 Chef Brandt Evans is one of Ohio’s top chefs. He has received numerous accolades since 2002 following the opening of his first restaurant, Blue Canyon Kitchen and Tavern in Twinsburg, Ohio.

His love for the culinary arts began at age 16, as he entered into his first job at Starboard Tack. He went on to train at the Culinary Institute of America and with a fresh diploma tackled the stove at Charlie Palmer’s Manhattan restaurant, “Alva”. There he perfected his technique and waited for the perfect opportunity to break free from convention.

Returning home to Cleveland Evans began creating the menu for “Kosta’s”, a newly opened restaurant, where he combined the ethnic flavors of Manhattan with the cold winter comfort foods of Northeast Ohio. Following Kosta’s he opened “Blue Canyon Kitchen and Tavern” where his new signature Creative American Cuisine grew exponentially.

Evans currently owns restaurants in Twinsburg, Ohio; Missoula and Kalispell, Montana. He was recently one of eight chefs nationwide chosen to be a Chef Ambassador for The Wisconsin Cheese Board. In 2009 and 2010, he won Grand Champion Akron Canton Super Bowl Chef, which allowed him to showcase his recipes as the Pro Football Hall of Fame’s representative at the 2010 and 2011 Taste of the NFL event. In addition, Evans was acknowledged as being the “Top Chef” at St John West Shore Festival of the Arts 2008 and 2009. He has also reached out to the community through publications in Better Homes and Gardens, Plate Magazine, and his monthly column in Living Magazine. Evans also represented the finest cuisine in Cleveland when he appeared on the Food Network and Celebrity Cooking Stage of the Fabulous Food Show in 2008.

Driven by a passion for food, he is committed to expanding the flavors of any dish beyond the plate with his custom Blue Canyon wines. He has traveled around the world to personally pick and blend fruits that compliment several of his signature dishes. He strives to produce the most tantalizing experience for the taste buds and continues to exhibit his ability to do so.

Chef Brandt Evans is known for his extraordinary palate and warm personality at charity fundraisers and community events. He looks forward to using his experience and expertise to create new concepts and opportunities in the culinary world.

Chef Brandt is currently Chef-partner of Blue Canyon Kitchen & Tavern in Twinsburg Ohio. He launched his new company, BKM Hospitality LLC, in June of 2010. This restaurant management company launched its first of many projects in downtown Cleveland in the former May Co. Building. Opened in June of 2011, named “Pura Vida,” (translate to Pure Life, the motto of the restaurant) and ready to introduce Public Square to gourmet breakfast, distinctive lunch and coining the name “Urban Picnic” which introduced a new style of dining for NE Ohio.

Pura Vida offers the opportunity for Chef Brandt to showcase his culinary talents with an aggressively creative menu, craft beverages and piece together direction for upcoming restaurant and hospitality industry hopefuls while offering growth for the many careers he has encouraged as a true mentor in the industry.

I am an owner and partner of Blue Canyon Kitchen & Tavern restaurant with locations in Twinsburg, Ohio and Kapispell and Missoula, Montana. In 2010, I opened my hospitality management company, BKM Hospitality, which oversees the daily operations of Pura Vida by Brandt and the food and beverage department of the Cleveland Racquet Club. BKM is also in the process of building a brewery restaurant.

Where did the idea for BKM Hospitality come from?

BKM Hospitality is named after my name, Brandt, my wife’s name, Kristen, and my Daughter, Madison. BKM is a management company that oversees everything from concept development, construction of food and beverage menu engineering, staff resources and financial reporting.

Aside from customers dining in my restaurants, BKM Hospitality has a team that specializes in restaurant consulting, assessing each and every aspect of restaurant operations—from front of the house to back of the house restaurant services, personnel, purchasing, menu design, and everything in between. Each project proposal includes a scope of work and a fee structure, both of which are determined by clients’ unique requirements.

I can honestly say I don’t have a typical day. I wake up and head into the office to check emails and daily sales reports. I am in meetings from morning to night, talking about everything from staffing to menu development to public relations. During dining hours, you can find me walking around one of my dinning rooms, talking to customers.

I approach my staff and see if they will buy into my idea. If they do it’s an easy process. We divide up the idea and everyone takes a part to execute.

Philippines cuisine is an emerging trend I’m excited about. The spices, a mixture of Malay, Spanish, Chinese and American flavors, are also becoming popular. True Thailand street food will be popping up on menus all over. These are great regions you can borrow from to create great healthy vegetarian dishes.

My worst job had to be being a dishwasher at a steak restaurant. They didn’t have a dishwasher staffed during the day, so I would walk into a mountain of dishes, pots and pans. By the time I got caught up, the dinner rush would come. I learned when the dish room gets really backed up, roll up your sleeves and help your fellow team member.

If I could do it again, I would do more international traveling. I would love to work in kitchens all over the world.

I stopped saying yes to everyone’s requests. It has helped me stay organized and focused on what’s important.

In the restaurant business, it’s crucial that you focus on vegetarians and vegans. Offering only one menu item isn’t enough. Also, when you walk around your dinning room, watch if your guests are using the salt and peppershaker— I promise if they are, your kitchen staff isn’t seasoning correctly.

If I could change one thing, I would stop people from parking in handicap parking spots that don’t need to. My best friend has MS and really needs those parking spots. I would pass a law that if your caught you can’t drive for five years.

When I was younger, I wanted to be a geologist.

Since I’m pretty busy, I tend to be on my phone more than my computer. My top three apps I use and find resourceful would be Evernote, ShelfLife and Yelp. Evernote helps me stay organized. I can create to-do lists and even maintain my business contacts, all in one place. ShelfLife helps me keep track of my inventory and alerts me when expiration dates are approaching. This is vital because my menu is based around fresh foods. Yelp is a tool I use to monitor my feedback. You can learn a lot through reviews of your restaurant and make changes accordingly.

I think everyone should read, “The world is flat” by Thomas Friedman. This book explains why government, communities, societies, companies and individuals need to adapt to today’s world.

For anyone in the hospitality industry, Paul Barron and David Henkes are two people you have to follow. With daily links to newsletters, they’re valuable resources, providing updates on news and events in the industry. Lastly, the childhood obesity effort is something I’m passionate about. I would recommend everyone follows Campaign ToEndObesity, which is dedicated to reversing obesity.

The last time I laughed was today when I watched the weather forecast and they put up sun, clouds, rain and lighting bolt. I laughed because the only thing that wasn’t put up on the weekly forecast was snow.

My father is my hero. He has taught me that working hard does pay off and to enjoy everyday because life goes fast.

How did you become successful?

I have been very lucky to have a great core of staff that truly believes in the goals at hand. A strong team is crucial for success in the restaurant industry.

What do you want to do when you retire?

I want to be on my bass boat at least six days a week when I retire.