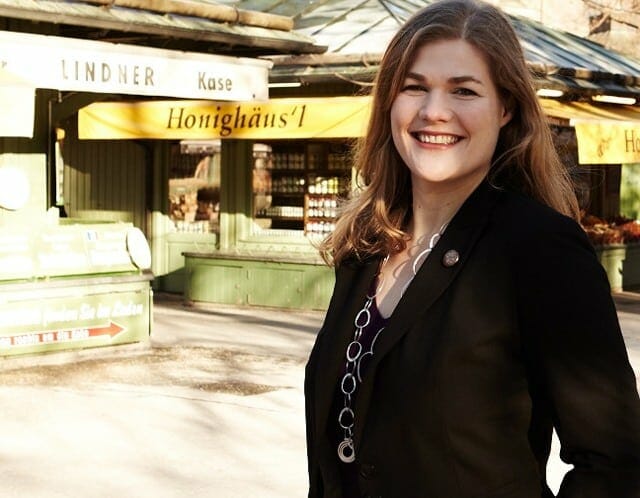 Catharina van Delden is CEO and co-founder of innosabi, the leading German provider of Internet-based co-creation tools. In June 2010 innosabi launched unserAller.de, a social product development platform where consumers first discuss their own suggestions and then vote for the best ideas. This is how companies can get in close touch with their consumers and find out what they really want – in order to create products that truly amaze. For participants it is the chance to voice their “I wish there was…” suggestions to companies and be rewarded for it. 13.000 users are already taking part in the community development and have realized a number of new products or line-extensions with reputable companies and popular brands as well as with small companies. Amongst the community-created products are a shower gel, salad dressings, liquor and scarfs. If you want to learn more about Catharina’s work, visit unserAller.de.

At the moment we are working hard on the further development of our SaaS-version of unserAller.de. Previously, clients always needed our support to conduct crowd sourcing; now we offer an effective software and a community of product enthusiasts for every kind of enterprise that can be managed by everybody, not just us. In particular, these efforts concentrate on making our product self-explanatory, setting up large-scale sales and online marketing.

Where did the idea for unserAller come from?

The idea for an interactive social development platform was inspired by the “Brewtopia” project in Australia. In 2002 a brand new beer was created, developed via Internet together with thousands of users from dozen of countries. On the one hand the foundation of the company was based on the observation that most consumers know which products they want and which expectations they have. Often they also have innovative ideas for solutions. On the other hand we detected that the involvement in such projects increased the interest in the products, even before the product launch. These experiences have been implemented in the unserAller platform, which allows standardized deployment of co-creation activities for different types of consumer-oriented businesses.

It always starts with exceptional coffee and ends with a wrap up of the day over a cup of tea – anything in between constantly changes. We meet so many great people and are presented with so many opportunities that everyday is different from the other. And I love it this way!

Our team is blessed with highly skilled developers. So we are able to give many of our ideas a try in small scale without developing them to full extend. That gives us the opportunity of real-life experiences to plan with instead of speculations.

Well, of course it is crowd sourcing and co-creation! It is amazing how platforms and applications can support collaboration and the communication among distributed groups of people and bring forward innovative solutions. Did you know that 61% of all US adults who are online want to create in co-creation? And even more impressive: “Meaningful customer insights” are a top priority for 30% of marketing executives?

When I was a student I regularly worked as a freelance promoter. Through these experiences I learned the hard way how difficult it is to sell a product that does not always deliver. I also had a hard time with customers disliking the company or product you work for when they feel they do not receive sufficient value for their hard-earned money.

We prided ourselves in growing the company without any external money and to have come to a point, where we could deliver a solid proof of concept. Today I would probably raise venture capital earlier when believing in an idea as strongly as was the case with unserAller. Why take it slow when you truly believe in the success of an idea?

Talk to everybody you meet about your vision.

Well, in my opinion success comes to a great part from execution of an idea. But anyway, a couple of years ago I was very intrigued by the idea of juice which is produced from single breed grapes as an alcohol-free alternative to wine, e.g. Chardonnay-juice. By now there are a couple of companies who offer exactly that in great quality. They even do the same for apple and other juices!

Had unserAller been there at the time I could have suggested this idea to juice-manufacturing companies and would have been rewarded for it… But, anyway, it’s great to see an idea come true!

Dropbox: As almost everybody has mentioned Dropbox, I don’t think I have to explain.
Weheartit.com: The site and I have a love-hate relationship. It keeps me from doing useful things. But it does it so nicely!
screencast-o-matic:  So simple and useful!

If you weren’t working on unserAller, what would you be doing?

I’d probably be running the cutest cupcake bakery where you could drink the most delicious coffee and hot cocoa you’ve ever had and eat cupcakes with names like “fancy Nancy”. It would be in an old house with a large garden with grazing ponies in it. No, seriously? I love what I do and would not want to do anything else! (even though our team does have an unhealthy obsession with high quality coffee)

I look up to many entrepreneurial friends of mine, who are true role models for everything I do: Having built a successful company and at the same time keeping flourishing networks of friends. But the choice of a true “hero” follows irrational paths. So I have trouble explaining, why mine is Lucky Luke. I always wanted to be him (yes, not LIKE him but actually live his life), when I was a child. Still kind of do – riding into the sunset every day, having achieved my hero-cowboy-goals for the day and feeling satisfied and calm…

Read the question about heroes– one secret per interview only 🙂

Where do you see unserAller going in the future?

unserAller shall be an international platform, where consumers go when they are craving for a product or service that does not exist yet (doesn’t everybody have the “I wish there was…” moments?) and be rewarded for their ideas. In the future I want it to be a standard for companies to involve their consumers in new product development – I wonder why this is not already the case…

You mentioned coffee to be an “unhealthy obsession” – how do you like it best?

In Amsterdam I discovered the “coffee verkeert”. First of all, I love the name! And then it also has the best mixing ratio between milk and coffee and is served in the most pretty glass… Everybody else would probably say, it’s a regular latte, but I always remember good times at the  Dutch “gracht” (town canal), when I drink it.

Mail me at [email protected]  or become our fan at www.facebook.com/unserAller