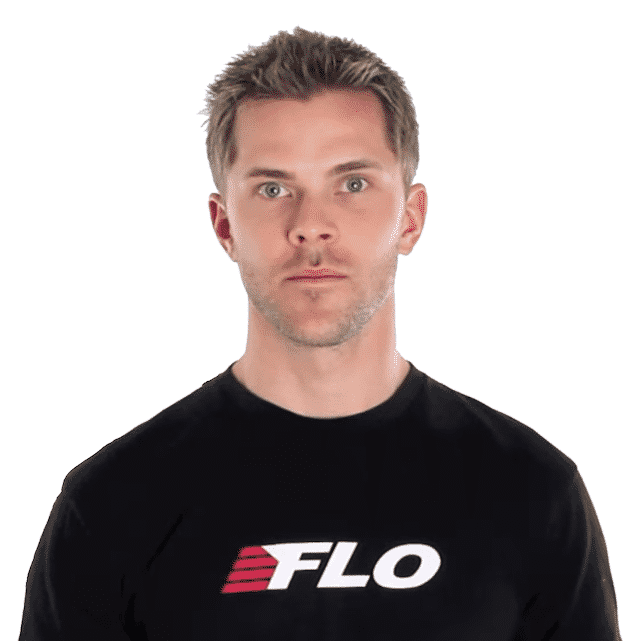 Making a list or schedule of things to do and sticking to it. I used to react to everything the minute it came to me. This used to be possible when FLO Cycling was smaller, but now it’s not. You get so much more done when you focus on one thing at a time.

Chris Thornham is a co-founder of FLO Cycling, which engineers aerodynamic cycling wheels. The company uses computational fluid dynamics software to develop its wheels and verifies its results in a wind tunnel.

Born and raised in Dartmouth, Nova Scotia, Canada, Chris grew up with an interest in engineering and sports. In high school, with the help of his twin brother, Jon, he placed third in the engineering division at the National Science Fair by designing an apparatus that cast a fly-fishing rod by itself.

Chris went on to study mechanical engineering at the University of New Brunswick and worked as a ski instructor and technical representative for a ski company. During breaks, he and Jon would travel to other cities, such as Las Vegas, Los Angeles, and Vancouver, to earn money for tuition.

When Chris graduated in 2006, he moved to Las Vegas to take a job as a mechanical engineer. To no one’s surprise, Jon received the same job. After starting their new jobs, it didn’t take long for the brothers to start working on their own business. In 2008, they launched a charitable organization called Painting With Purpose. It was a learning experience, but the business ultimately failed due to a lack of marketing knowledge.

Shortly after Painting With Purpose closed its doors, Chris and Jon studied marketing before starting their next venture. In 2010, they founded FLO Cycling. Two years later, they hosted their debut sale, selling 750 wheels to consumers in 28 countries in a single hour. Today, not even three years later, the company has sold 10,000 wheels to customers in 51 countries.

Aside from working at FLO Cycling, Chris enjoys learning, triathlon training, skiing, hiking with his dog, and spending time with family.

Where did the idea for FLO Cycling come from?

Growing up, Jon and I were athletic. We competed nationally as black belts in taekwondo, were downhill ski racers and instructors, and tried pretty much any other sport you can think of. After graduating from university, we started working 40+ hours per week as mechanical engineers. I kept going to the gym to stay in shape, but after a few months, I wanted to compete again. I was drawn to triathlons.

In triathlons, you swim, bike, and run in the same event. The bikes in triathlons are very technical, and I was immediately drawn to their design. While trying to purchase a bike, I learned quickly that they’re prohibitively expensive. Of all the components on a race bike, wheels are one of the most expensive items. The best wheels were, on average, $2,000 to $3,000 per set.

I showed Jon the price of these products, and he was as surprised as I was. I asked him if he thought we could design a similar product for a better price, and he thought we could. After nearly two years of design, factory sourcing, and planning our distribution strategy, FLO Cycling was born, and we were selling comparable wheels for one-half to one-third of the price of the competition.

As a two-man business, Jon and I have to stay on track to get things done. The mornings typically start with going through email, our social media accounts, and forums. That’s typically followed by a walk with our dogs, when we talk about the business.

After that, we focus on a bigger task for the day. That ranges from product design to website design to marketing to customer service. That email/big task cycle typically repeats itself in the afternoon and sometimes after dinner. Somewhere in there, I typically fit in one to two hours of swimming, biking, or running.

As cliché as this may sound, we just do it. When we were younger, Jon and I used to talk about how cool it would be to own or work for a company where you could create cool products. We believe FLO Cycling is one of those companies. We’ve learned that there will always be roadblocks, but if you put your head down and continue looking for ways to make things happen, almost anything is possible.

I love how technology is allowing people to create businesses from their living rooms or garages. With the software and easily accessible knowledge available today, there’s not much standing in the way of you and your wildest entrepreneurial dreams.

Making a list or schedule of things to do and sticking to it. I used to react to everything the minute it came to me. This used to be possible when FLO Cycling was smaller, but now it’s not. You get so much more done when you focus on one thing at a time.

I once worked for an egotistical micromanager. On top of always being wrong, there was a total lack of trust and respect for employees, and it killed morale. In a short period of time, there was a nearly 100 percent turnover of staff because people either quit or were terminated for ridiculous or made-up reasons.

That job pretty much taught me everything you shouldn’t do when dealing with people. When you trust and empower the right people, the sky is the limit.

FLO Cycling was our second business. In all honesty, it was our do-over. Our first business failed, but it was an incredible learning experience. I think that allowed us to get a lot right with FLO Cycling. That said, if we were going to start another business, I think it would focus more on technology, not a physical product.

Always move forward. If you stop moving forward, you get nowhere. After our first business failed, Jon and I spent a period of time trying to figure out what we were going to do next. We had several business ideas in mind, and we stalled for months, not starting either of them. I sat down with a successful entrepreneur and asked him if he ever got to a point where he simply couldn’t figure out what to do. His answer changed me.

“Never stop moving forward,” he said. “At any given time, you have a certain amount of information. With that information, you have to make the best decision you can and take a step forward.”

Jon and I followed his advice, and FLO Cycling was the next step.

Don’t ever sell. In this day and age, people don’t want to be told to buy something. Instead, if you help answer their questions while they’re in the buying cycle, provide them with informative content, and treat them with respect, they’ll want to buy from you. You won’t even have to ask.

We started our first business without knowing anything about marketing. We thought our idea was so great that everyone would just buy our product. We forgot to think about what the customer wanted. As a result, the business failed. Before starting FLO Cycling, Jon and I took a period of time to learn about marketing. We didn’t want to start another business until we felt like we were prepared.

I think pediatric home health for new mothers would work well. Getting out of the house with a newborn is a chore. Add another kid or two into the mix, and it’s even harder.

Jon and I acted for a brief period of time in university. In fact, a month or so before graduating, Jon and I were up for supporting lead roles in a Disney film. Our agent said it was down to Jon and me and one other set of twins. We said to ourselves: “If we get the role, we’ll go act. If not, we’ll go be engineers.” I think you know what happened.

• Wunderlist makes organizing my to-do list easy, especially when coupled with the book “Zen To Done” by Leo Babauta.

• Autodesk Inventor Professional allows us to create 3D models of our mechanical designs.

• STAR-CCM+ allows us to test aerodynamics at a fraction of the cost of real-world wind tunnels with highly accurate results.

“The New Rules of Marketing and PR” by David Meerman Scott changed the way I look at marketing altogether.