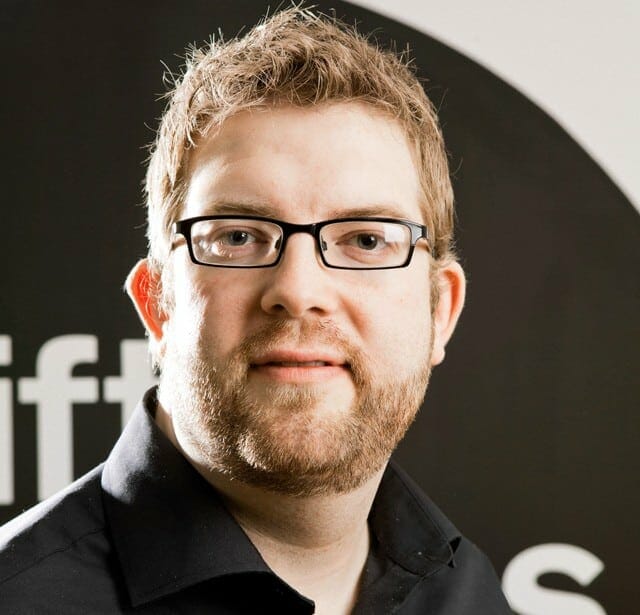 [quote style=”boxed”]Ideas bring themselves to life. I find that the best ideas cannot be repressed; they want out until they completely consume your sleep and waking day. So never try to force an idea – if it’s strong enough you cannot control it. When that happens, I just try to hang on for the ride.[/quote]

Christian Lanng launched his first start-up at just 19 years of age after reading Douglas Coupland’s Microserfs and wanting to be like the main character, Michael. His start-up created one of the first mobile browsers and was sold 2 years later, shortly before the Internet bubble burst. Not knowing what to do next, Christian studied sociology for 3 years, but then quit university to become one of the first drop-outs to go full time at his job in the Danish government.

He went on to become the youngest division heads in the Danish government. During this time he met the co-founders of Tradeshift and they created the world’s first open-source peer-to-peer e-business infrastructure. It became wildly popular among Danish companies, attracting more than 40% of all Danish companies in 10 months. The team went on to create an open standardized cross-border framework for e-business called PEPPOL, which today is used by more than 14 European governments.

Becoming bored with government policy, Christian responded to a tweet by serial entrepreneur Morten Lund. After spending a weekend in Abu Dhabi, they decided to launch Tradeshift as the world’s first cloud business network, mixing business and social networks. Tradeshift has so far been highly successful, with users in more than 190 countries and more than 2,000 users joining the online network every week.

Wired magazine wrote about him in the issue “The Future of Money.”  The article states, “whatever the future of payments looks like, it will probably be brought about by people like Christian Lanng.”

A bunch of stuff: how to double our organization every year, some of the new products we are launching and preparing for our entry into the U.S. market. I tend to have my ear to the ground on everything happening at Tradeshift and participating where I can help.

Yesterday I got up at 6:30 AM, had a call with one of our sales people, read my email and biked to work (everyone bikes in Copenhagen). I then walked around talking to all the people who are in early and learning a little bit about their priorities. Then at 10:00 AM, we have what’s called Big Sync, which is an open 2-hour session where everyone presents and demos the projects they are working on. In a company such as Tradeshift, everything moves really fast and Big Syncs are a chance to catch-up with everyone.  After that, I had a meeting with our lawyers over our current U.S. legal set-up and opening a U.S. office. I spent the afternoon discussing some product concepts with our small business team. I went home at around 6:00 PM, spent a few hours relaxing, then I had calls with our U.S. team and prepared some presentations for the next day. My day ended at 1:00 AM.

Ideas bring themselves to life. I find that the best ideas cannot be repressed; they want out until they completely consume your sleep and waking day. So never try to force an idea – if it’s strong enough you cannot control it. When that happens, I just try to hang on for the ride.

Reading about other people’s experiences. I love biographies, especially the honest ones. I travel a lot, so I also get to read a lot and try to read at least 1 book every week. Working with people who are passionate also inspires me.

I have made so many and I try to learn from most. My biggest mistake has repeatedly been to underestimate the effort of doing something. I think that’s in an entrepreneur’s genes, but if we didn’t we would not try. I have learned that when people start coming up with a lot of objections about why you can’t do something, you can often safely ignore them – it always works itself out in the end.

Figure out how you can deliver something to your customers that they used to outsource. The cost of 3D printers, manufacturing equipment and similar are bringing production cost down so that the West can start doing production again and be on the front-end of that movement – you have a huge opportunity here.

I just finished reading Eric Ries’ The Lean Startup. It’s an amazing book because it’s so actionable. I knew a lot of the concepts beforehand, such as agile development (which we have been doing for 10 years), but to see them applied as business strategies was amazing. Now I’m reading Neal Stephenson’s REAMDE, which is fiction but an amazing journey through globalization and virtual gaming worlds. I try to mix fiction and business literature.

Eric Ries’ The Lean Startup – it’s all you need to know to start your first company. Everything else can be learned on the journey.

That’s a tough one – probably Spotify. I use it everywhere. I believe life needs a soundtrack.

Why is Tradeshift so different from all other business software startups?

Great question! Most business software has been designed by accountants or engineers, which means it’s very mechanical and doesn’t put people in the center. At Tradeshift, we created a network first, linking companies and transactions and making bookkeeping a result of your social interactions, not the other way around.

What would you do right now if you were not working on Tradeshift?

I would be travelling the world learning how it’s changing in 2011. I’m generally a huge optimist about humanity and I think that these years are defining for long term progress, such as the Arab Spring. I know it’s a tough economic climate, but in many ways I think that is healthy because it forces innovation.