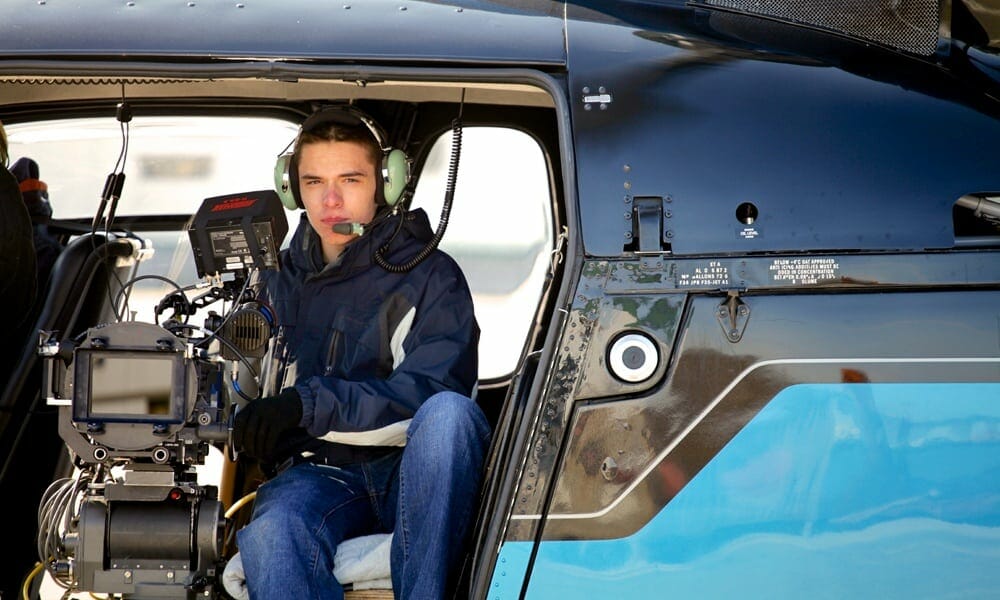 Christian Tucci is an aerial coordinator, cinematographer and pilot from Long Island, NY. He has worked in the aerial cinematography and aviation industry since the age of 13, learning the business from a long-time friend and mentor, Al Cerullo of Hover-Views. Christian’s work involves a variety of helicopters and fixed-wing aircraft and has extended into aerial coordination and filming on productions that utilize unmanned aircraft (drones). He is a co-founder of Cinematic Aerospace, a New-York based aerial cinematography company which is the first Wyvern EXACT certified operation in the United States specifically dedicated to film/TV production missions.

Where did the idea for Cinematic Aerospace come from?

A few years ago, I saw a kid flying a drone in a park and thought it looked like fun. I found out quickly the quality of footage you could capture with these cheap drones was amazing, and almost the same quality of video we captured using helicopters when I first started. So, I figured as drone technology and camera technology gets better, why not start using them to film aerial shots, especially in places that helicopters cannot get.

I am involved with a few other ventures besides Cinematic Aerospace so planning out the day is important, to focus on what is needed immediately by each company. If not working in the field on a particular day, I come into the office, answer emails, do paperwork, etc… I get all of that out of the way first so later in the day and at night I can focus on going out to meet clients, picking up parts or equipment, doing repairs on drones, or just hanging out at the airport with friends if everything is taken care of.

I have found that the best ideas get traction and more meaning after sharing them with my family and friends. Even tasks like picking a name for a new company, family and friends are great to bounce ideas off of. That is how Cinematic Aerospace got its name. As for actual business ideas to enhance the company, I find it important to think really big and grand. Even if things don’t pan out to that level in the end, they typically pan out to a level bigger and better than before.

Blockchain technology. It is exciting to see the many uses of Blockchain and how big (and small) corporations approach it now.

I love computers and technology, so this translates into finding cool and new software that helps me keep track of tasks and projects, run reports, and communicate with others. I love finding new software to try out.

It sounds cliché but, seriously don’t let other people or situations make you feel like you aren’t good enough. Back in elementary school, there was a special gifted program called Alpha where selected students in 6th grade would get to travel to the main school in the district once a month and participate in a special class doing all sorts of fun projects and creative challenges instead of being in a normal class for the day. When I got to 6th grade, I was so excited for the opportunity to be in it, and I had the grades to match the kinds of students that usually get selected. But I didn’t get selected, for whatever reason, and a bunch of the kids I hung out with did. I took not getting selected to mean I wasn’t creative or bright enough. And to a 6th grader, it didn’t give me much confidence for my future. I wish I realized back then that everything happens for a reason, and not getting selected for that program could have produced 10 times the benefits of being in it. It made me want to succeed and try harder that much more.

College isn’t for everybody. I know a lot of people know this, yet it seems most of the people I talk to have the default path for their kids to take involving going to college. Sure, everybody knows if you are going to be a plumber or electrician or mechanic, you go to trade school instead, but what about other fields, like business? It seems everyone defaults to business school for any job in business but I think they should weigh the options carefully, especially if you have the ability to take money that would be spent on going to school and use it to fund your own business initially. There is no better way to learn business than by doing it!

Networking. I think this is so important for any business. It is key to network with as many people as possible. In school, at work, when you are just out having fun with friends… You never know who you are going to meet out in the world and some of my company’s biggest clients and projects came from just getting to know people and what they do.

This one is funny. My first “business” was being a DJ, when I was in elementary school. I would DJ family parties and stuff like that and slowly more people around town would use my services at their parties. I was literally 10 years old so couldn’t buy or listen to explicit music or anything like that. So, when a potential client (group of teenagers) was going to have me DJ a party and they asked what music I have and I said I could play the YMCA and Cha Cha Slide and it would be fun, they were like “WTF??? No.” It made me realize I wasn’t setup to actually run a DJ company then, which was my intention. So, I stopped being a DJ. I don’t know if this counts as “overcoming” the failure but I think it is important because sometimes part of business is making a call and saying “You know this isn’t working out, is there a way to change it or should I just move on?”

I had an idea to create an e-sports type birthday party venue. How cool would it be to have a kid’s birthday party (assuming they like video games) in an arena type setting, with giant screens on the walls, and all the fancy lighting and stage smoke, and computers and the kids can play video games against each other like in the big-league gaming tournaments on TV. You could even have cameras and make it a whole production for them to take home.

I bought a Raspberry Pi 3 kit and associated accessories. For anyone that likes computers and tinkering with electronics and coding, you will have a blast making things with it!

Asana. I don’t use it like people typically do, to organize tasks amongst one company with a team of people. Instead, I create projects for each client I have and each company I have. I add tasks to those projects to keep track of exactly what needs to be done, and when it needs to be done. It is so much easier to have a system like this rather than trying to remember everything.

“Pre-Suasion: A Revolutionary Way to Influence and Persuade” by Robert Cialdini. Being able to persuade people and negotiate with people while networking, I think, is one of the most important skills to have in business.

“The only limits are the ones you set yourself” -Unknown “Meet success like a gentleman; disaster like a man” -Winston Churchill

• Don’t be afraid to evaluate something and move on if it truly isn’t working out.
• Make time to learn new skills and learn about topics you love.
• The right software can play such a big part in helping you stay productive.
• Use “failures” to help you try harder and become better (sounds cliché but I cannot stress this enough).