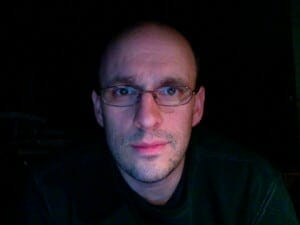 If the devil is in the details, Corey Guilbault is an exorcist. Corey’s formal title is the Director of Operational Integration at Rockefeller Consulting/Insight Capitalists (RC/IC) – a company focused on helping businesses achieve better performance through stakeholder alignment. Working through the Enterprise DNA Alignment Model, the lens through which RC/IC looks at businesses, Corey Guilbault’s job is to define the paths that get businesses from ‘We should” to ‘We did”.

The son of a polymer chemist and an art teacher, Guilbault frequently hops back and forth between right- and left-brained thought processes with an appreciation for both scientific reasoning and leaps of intuition. When he’s not working, Corey can be found pursuing Aikido, a Japanese martial art or chasing around his two daughters who constantly have him playing catch-up.

By day (and often at night) I am in the throes of helping get our Enterprise DNA Alignment Model into the hands of businesses. We’re ‘open sourcing’ it – trying to put it out there like a strategic API so that companies can work with it, and with us, to improve their performance.

I see a tectonic friction between capitalism with its traditional business concepts and the Internet’s communal/collectivist soul. One party says ‘share’ and thinks about market share. The other says ‘share’ and thinks about open-source and freemiums. The beauty is, neither can live without the other anymore and right now everyone is working really hard to figure out how they can live together. I’m planning to write a longer treatment on this idea and its implications.

A second trend is the connection between some very old, eastern concepts that I derive from Aikido and some of the current western business challenges I come across professionally. Eastern ego and Western ego are very different ideas, yet I believe we all have a mixture of the two ebbing and flowing within us.

A third trend is this cultural embrace of ‘failure’ as a rallying cry (and I might argue at times a noble excuse for wasting resources). Scientists expect to fail but try to orchestrate their experiments to learn from failure. I don’t see this reasoned approach as frequently in other industries. All too often I observe a shotgun approach to experimentation that yields no real useful information. I call this ‘flailure’ with the extra ‘L’ for lazy process. Failure moves us forward, flailure leaves us thrashing around more or less in place.

Every day we wake up calibrated to concepts like speed-to-market and first-mover-advantage. These make us rush and often shortcut critical thinking time. They are real world conditions we have to live within, but I think they can be mitigated by keeping the perspective that no idea is ever ‘done’. That was the great lesson of the early commercial Web – you weren’t stuck with 10,000 out-of-date brochures in a warehouse. You could always make changes. For me its not so much bringing an idea to life as keeping it a living idea. This is a matter of continually revisiting ideas, mulling them over, poking holes in them and seeking disconfirming perspectives. The artist Marcel Duchamp, when playing chess, would make unusual moves simply to keep the game interesting – even if it meant he’d lose. I think that’s a great way to think about thinking.

Simply put, I saw the need to make a choice where I really didn’t have to. As I noted, I grew up with scientific process and artistic whimsy in my house. I learned about right-brained and left-brained thought processes. I came to believe, especially going into college, that I had to make a choice between the two. I chose right-brained and sadly walked away from science and it’s particular way of reasoning for years. It was only at the pinnacle of personal frustration, when I found myself not being asked to engage my process-mind, that I decided I’d had enough and I wasn’t going to differentiate the two. I came to realize that for me, fulfillment comes when I engage my whole mind. I also think I contribute more this way.

This will sound like so much company self-promotion, but I’ve come to see and believe in its value: Alignment is everything. You can adopt new management trends, new technologies and hire brilliant people but if don’t build a business or organization that is aligned around a mission and vision you simply won’t get as far as you could have.

What goes into building alignment within a business?

Real, living, operational alignment means more than just getting everyone to memorize the mission statement and wear the company shirt. The values of the company must be included in its organizational structure, its culture, the expression of intellectual property, how it handles its financial dealings and how it talks about itself both internally and externally. Businesses live in an ecosystem which includes internal stakeholders (leaders, managers, employees) and external ones (strategic partners, customers, regulators, the communities they operate in etc.). They all impact the company’s performance. Alignment is tall order, it means seeing the intermingled agendas at work in that ecosystem. But it can be done. And as with most such work, it need not all be done at once. Prioritization is important. There are immediate benefits to be had by taking even a few steps.

What’s one martial arts lesson that might be useful in life?

One of my favorite public demonstration tactics is to show a multiple-person attack scenario. As I line up 4 or 5 attackers I label them ‘email’ ‘phone call’ ‘my boss’ ‘my wife’. I explain that we all face an avalanche of things to do each day. If we try to do them all at once, we fail. This is then demonstrated as I get whupped by the horde of attackers. If instead we start and finish one task at a time we last much longer (though we still wind up exhausted!). This is again demonstrated through martial technique. The reality is, multitasking is a myth. You wind up doing three things mediocre rather than one thing well. Scientific research bears this out too. This lesson a very practical example but one thing I like about Aikido is that it is ultimately very pragmatic. The world of big ideas requires pragmatic thinking if any of them are to come to fruition.