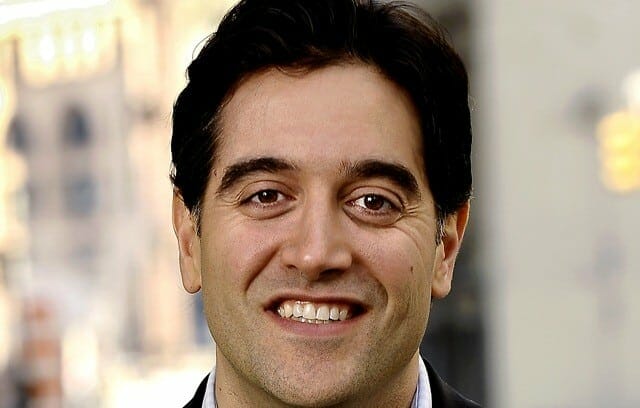 [quote style=”boxed”]I believe that in order to make big ideas a reality, you have to surround yourself with the best people to ensure that your vision comes to life.[/quote]

Cyrus Massoumi is co-founder and CEO of ZocDoc, which he created in 2007 after rupturing an eardrum. Massoumi struggled for 4 painful days to find a doctor and became convinced that a better healthcare system is possible. He has extensive experience in the healthcare-technology nexus, web commerce and management.

Prior to ZocDoc, Massoumi served as an engagement manager at the global management consulting firm McKinsey & Company, where he focused on healthcare and technology. Massoumi’s 4 year tenure at McKinsey & Company began soon after his 2003 graduation from Columbia University, where he earned an MBA and received the Heffernan Award for Outstanding Service.

Massoumi currently resides in Manhattan. A native of Florida, Massoumi once served as a staffer for a U.S. Senator. He also worked at Disney World, where he learned important lessons about customer service.

Massoumi first met ZocDoc co-founder and Chief Technology Officer Nick Ganju when the two shared a desk at Trilogy Software. He met ZocDoc co-founder and COO Dr. Oliver Kharraz several years later, when they collaborated on a project at McKinsey & Company. Massoumi’s proudest and most humbling distinction to date is ZocDoc’s recognition by Crain’s New York Business as the Best Place to Work in New York.

As a company, we are focused on providing better access to healthcare by giving patients the ability to find doctors and book appointments online through ZocDoc. We are also in the process of expanding – we are currently serving 13 cities across the United States and are working to be available nationwide in the next 12 to 18 months. I spend a lot of my time recruiting the best people to join our team.

Where did the idea for ZocDoc come from?

I burst my eardrum on a cross-country flight in 2007 and was unable to find a doctor who could see me for 4 days using traditional methods. I knew there had to be a better way.  My co-founders and I decided to build ZocDoc with the mission of improving access to healthcare.

I am actually spending a great deal of time interviewing candidates, as we are hiring across all departments.  There is really no “typical” day and at this point, I wouldn’t have it any other way.

I believe that in order to make big ideas a reality, you have to surround yourself with the best people to ensure that your vision comes to life.

I am proud to see so many people starting companies and using their talents to affect change. From crowd funding sites like Kickstarter, to education startups like Skillshare, and of course healthcare technology brands like ours, I’m proud to be surrounded, especially in New York, by a talented and supportive group of entrepreneurs.

Every opportunity I’ve had has taught me something. I’m so grateful to have worked for some of the world’s top companies and with such exemplary people. Not every situation has been perfect, and one lesson I’ve taken with me is that one great individual can do a lot, but a great team can accomplish almost anything.

After ZocDoc launched in 2007, at the TechCrunch conference, we thought that we’d have this incredible amount of demand on our hands. In reality, it took us a few days to get our first appointment! But after we got a few dozen appointments, the growth increased dramatically and has been compounding ever since. After those first few scary days, I was reticent to hire too quickly because I wasn’t convinced that this kind of growth was sustainable. Now, we can’t hire quickly enough while still maintaining the high bar we set for talent. If I had it to do over, I’d hire great people the moment I met them rather than waiting for a future date when there’s a clear role for them.

The type of person who wants to start a company is often the type of person who has lots of creative ideas. It’s tempting to try to do everything right away, but companies that lose focus often fail. It’s so easy to get distracted with other opportunities. Devote all of your talent and time to building and scaling your core business before you move on to the next great idea.

One of our 7 core values is “Great People.” We challenge everyone here to hire people who are better than themselves. Vinod Khosla, one of our investors, gave us the good advice that the first 20 people you hire will set the tone for the company’s culture. From day one, we were very particular about who we hired and our most humbling achievement to-date is making Crain’s New York’s Best Places to Work in New York list 2 years running; so we must have set a good tone.

What are your 3 favorite online tools and what do you love about them?

Good to Great by Jim Collins looks at the qualities that separate a good company from one that goes above and beyond– from basic concept implementation to overall company culture.  Any professional can benefit from reading this book.

If you weren’t working on ZocDoc, what would you be doing?

It’s impossible for me to consider doing anything other than running ZocDoc. The company is my entire focus right now. We’ve accomplished a lot in four years, but we still have a long way to go to simplify healthcare worldwide.

The office environment keeps me laughing all the time, so the last time I laughed was probably about 5 minutes ago when someone shot the Nerf gun in my direction.

What has been your biggest challenge in creating and growing ZocDoc?

There is a lot of pressure at any company to develop new products and expand to new markets as quickly as possible. It was difficult to resist and stay focused because the opportunities for ZocDoc and in healthcare in general are so large. But we knew that in order to succeed, we needed to stay true to our promise of delivering better access to doctors.  For our first 2 years, ZocDoc only offered appointments in New York.  We made sure our business model worked and that our operations were scalable and successful before expanding to cities like Boston and Miami.  We’re still rapidly expanding, but we’re laser-focused on doctor’s appointments. This has been the key to our success.

What has been the best invention in your lifetime?